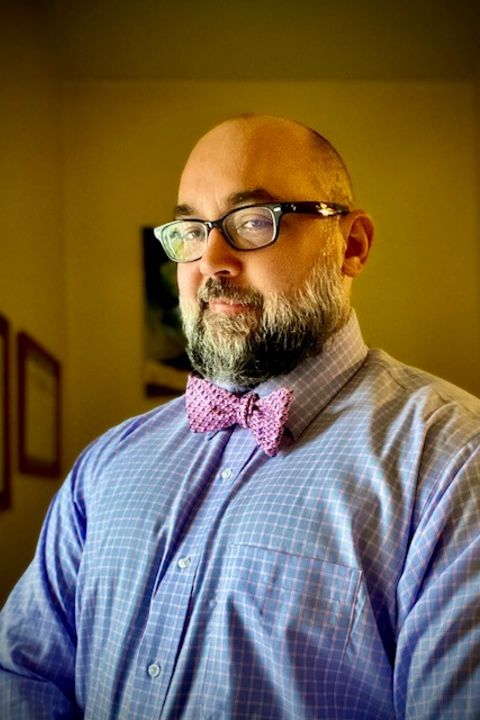 Dr. Christopher Michael Roman is professor of English and the Graduate Studies coordinator. He offers a variety of undergraduate and graduate courses, including early British literature, LGBTQ+ Literature, J.R.R Tolkien, comic book studies, queer studies and the Middle Ages. His various publications, lectures and presentations investigate the entangled themes of queer theory and queer theology in medieval vernacular religion, gender and sexuality in the life of anchorites and hermits, animal studies and ecology in medieval poetry, queer theory and the comic book, and the emergent field of sound studies. His first book, Domestic Mysticism in Julian of Norwich and Margery Kempe (2005), interrogates queer family formation in medieval mystical texts. His book, Queering Richard Rolle (2017), investigates the queer identity of the understudied and important medieval hermit, Richard Rolle. His new work investigates the use of sound in the imagined places of medieval literature. As well, he is working on new projects involving queer theory and the superhero, Wolverine, and sound studies as they pertain to the comic book Daredevil. His forthcoming collection, Medieval Futurity: Essays for the Future of a Queer Medieval Studies (2020), explores new theoretical directions for queer identity in the Middle Ages. He is the recipient of a Beinecke Rare Book & Manuscript Library Visiting Research Fellowship and an Erika and Kenneth Riley Fellowship at the Huntington Library in California for work on a new edition of Richard Rolle’s Middle English works to be published by the Medieval English Text Series (METS, 2021). He is the co-editor of the book series, New Queer Medievalisms (MIPS). Favorite Quote: “I am inevitable.”