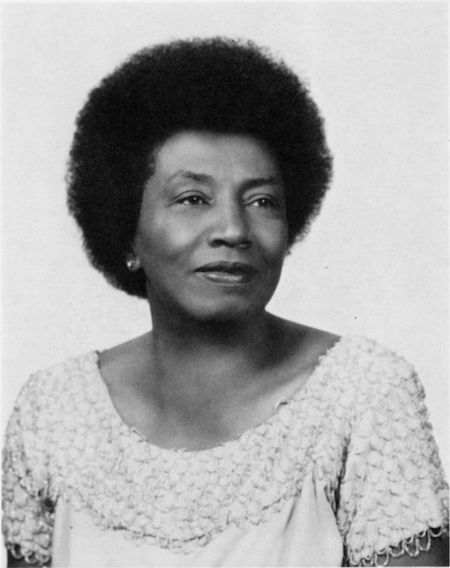 Often referred to as the “Dean of Black Women Composers,” Undine Smith Moore was born the grandchild of slaves. She started her piano studies at age 7 and eventually went on to study piano and organ at Fisk University, a historically black college. In 1924, Moore was offered a scholarship to the Juilliard School, which she refused in favor of joining the Virginia State College of Music faculty as a counterpoint and piano instructor, where she would work until her retirement in 1972. While holding this position, she taught piano, organ, and music theory as well as earning her Master of Arts in Teaching from Columbia University. During her time at Virginia State, the college was often short on funds for purchasing music so she wrote and arranged to shore up the gaps.

Throughout her life, she worked to advance the cause of African-American music. She co-founded and co-directed the Black Music Center at Virginia State, bringing black lecturers, composers, performers, and musical groups to the campus. She was lauded extensively throughout her career, with honorary doctorates from Virginia State University and Indiana University. She also earned the National Association of Negro Musicians Award, among a multitude of other accolades, including being named the music laureate of Virginia in 1977.

She wrote more than 100 pieces in different styles, working with choral, piano, and assorted instrumental ensembles across spirituals, ragtime, blues, and gospel. But, she is best known for her choral work that draws on the spirituals she was surrounded by as a child. She described them as “these great musical expressions of the Afro-American people.” Her early work did not draw on this heritage, but after completing her Master's degree, she was ”struck by the fact that many of the songs sung there were not so commonly heard. It was these spirituals I wanted first to arrange for chorus.”

Perhaps her most prominent work is “Scenes From the Life of a Martyr,” a Pulitzer-nominated cantata for chorus, narrator, soloists, and orchestra written to honor Martin Luther King Jr. Listen to a recording by the Detroit Symphony Orchestra.

With its origins at Kent State, Black History Month is a time to celebrate and recognize the achievements and central role of African Americans in U.S. history. Throughout the month, we'll be sharing stories of Black and African American composers and musicians who've shaped the development of American music.