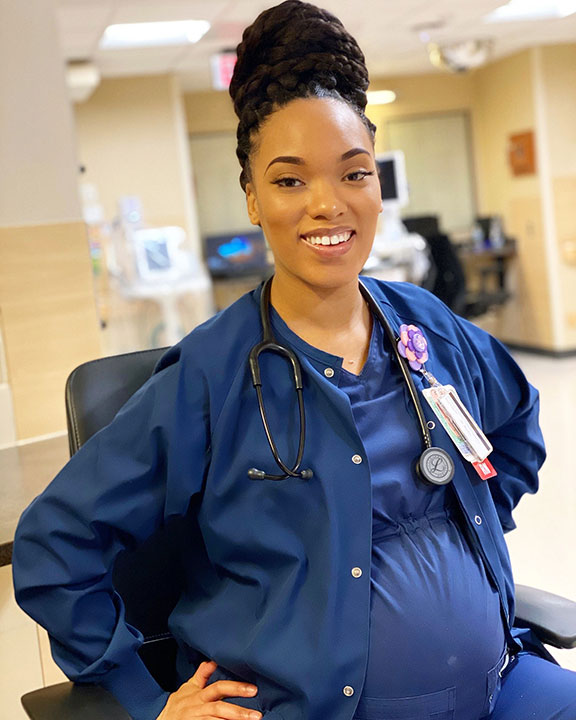 Just before the start of the pandemic, alumna Jasmine Jones, BSN ‘17, RN, a med-surg nurse at a large hospital system in the greater Indianapolis area, was not in a good mental place. Pregnant with twins, a boy and a girl, Jones had just learned her daughter would be born with Heterotaxy syndrome, which is characterized as a heart defect, in addition to the possibility she could be born with Down Syndrome, unable to eat and breathe or even be stillborn.

News of the COVID-19 virus was just beginning to make its way onto the evening news. Jones recalls that at the time, her hospital did not seem overly concerned about the virus. Out of concern for herself and the twins, Jones asked to have a mask while working, but her request was denied as the hospital appeared to be rationing the supply of Personal Protective Equipment (PPE). On March 18, 2020, Jones was floated to a different floor and again asked to wear a mask during her shift. She was denied again because she was not caring for a patient with isolation precautions. Around two o'clock that day, she started experiencing flu-like symptoms.

“I thought I must have overworked myself and needed to sit down, drink some water and just take a break,” Jones stated. “Finally, I was told I needed to go home and could not return until I was symptom-free without medication for 48 hours. As I drove home, my symptoms continued to get worse.”

Jones’ mother was at her home when she arrived with news that her older two children were also running low-grade temperatures. Her mom stayed late that night so Jones could get some rest. The children weren't able to eat or drink and were becoming dehydrated. Jones continued to deteriorate. 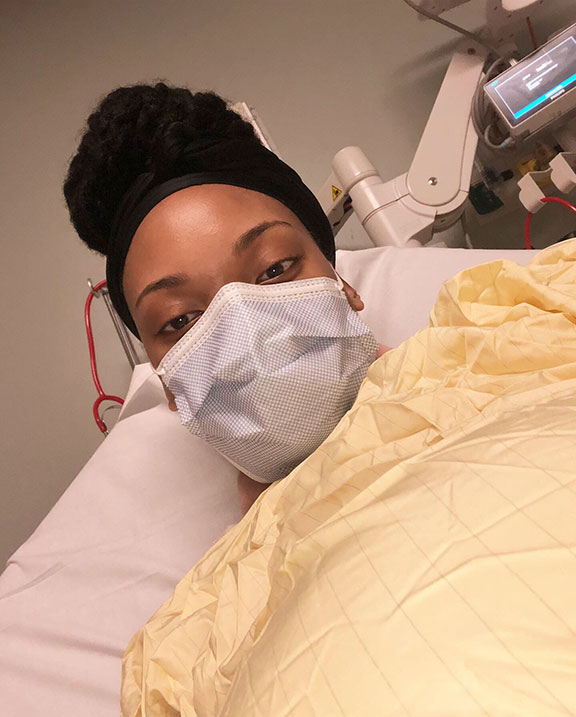 “I felt terrible that I had the flu and had given it to my children. I had chills, an excruciating headache, and body aches. I was sweating profusely and felt some heaviness in my chest,” remembered Jones. A few days later, Jones called her mother and asked to be taken to the emergency room because she was having difficulty breathing. “I thought I had developed pneumonia. In the ER they were taking extra precautions and when I said I understood because I am a registered nurse, I was told I had to be tested for COVID-19. I was instructed to stay home because of my symptoms and that someone would call me with my results in 48 hours.”

“I immediately started crying. I had COVID-19, and I was fairly certain my children and husband had it as they were showing symptoms, too. I had infected my entire family, and I didn't know what to do,” said Jones. “I had to stay home for 14 days, and I was worried because I was pregnant with twins and they rarely make it full-term. All of my OBGYN appointments were canceled. I was devastated. I was already worried about my daughter’s health. I called my employer with the news, and they sent the majority of the staff home to quarantine who had been in close contact with me. I was in bed for nine days and it took me about a month and a half to feel better.”

Her OBGYN instructed Jones not to return to work until the twins were born. “My hemoglobin had dropped to below eight,” explained Jones. “I was in no shape to be back at the hospital caring for patients, so I stayed home and waited to deliver.” Adding to her stress, Jones was concerned she might lose her job because she did not have enough PTO time saved. 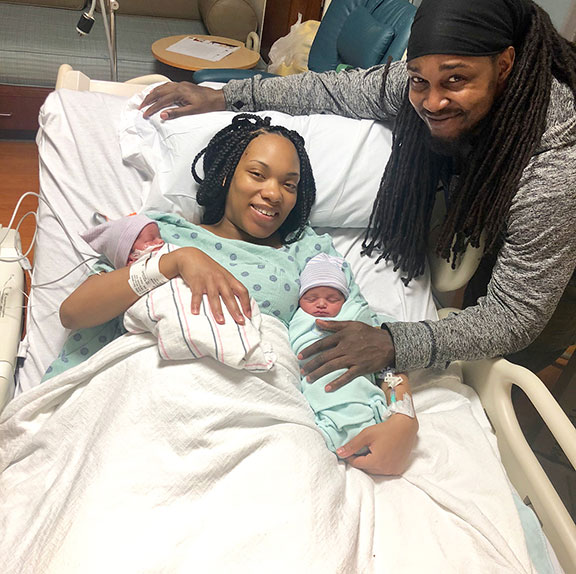 Jones gave birth to twins Hezekiah and Nevaeh on May 14, 2020. “My daughter was breathing with no signs of developmental delays, and she did not need emergency surgery. The babies showed no negative effects from my stent with COVID-19,” exclaimed Jones. “We were so happy and very grateful. Everyone is doing so well today. My daughter’s heart functions differently, but it works for her. Heterotaxy caused her organs to be flipped on the opposite side of her body.”

Facing COVID-19 was not the first major obstacle Jones has had to face in her nursing career. She briefly shared the struggles she overcame to become a nurse. Originally from Ohio, Jones was encouraged to enter the healthcare field after growing up hearing stories from her father who was an anesthesiologist in the metro Cleveland area. While in high school, Jones enrolled in a certified nursing assistant (CNA) program. She loved it and worked as a CNA for six years.

Upon arriving at Kent State University, she was disappointed to learn she could not immediately declare nursing as her major.

“I did not realize at the time you had to apply for the nursing program which is very competitive,” explained Jones. “I didn't get in the first time, so I went to speak with an advisor at the College of Nursing who encouraged me to apply at the then-brand-new Twinsburg location. They had just started a two-year associate degree in nursing (ADN) program. I applied and was accepted. I lived on the Kent campus and commuted to Twinsburg.”

Jones loved the smaller class sizes at Twinsburg because the students formed a small, tight-knit group.

“I went through so many barriers, but I would do it over again,” she exclaimed. “As soon as I completed the ADN program, I had two years of credits under my belt, so I applied for the 100% online RN-to-BSN program. The transition was smooth, and it took me less than a year to complete online from my home in Indiana.” 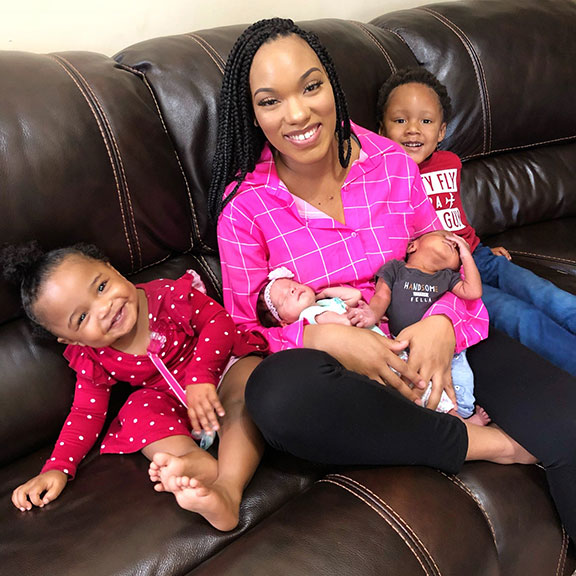 Recognizing that her story could inspire others not to give up on their dreams, Jones began to share encouragement on her social media platforms. “People have this mindset that when they are told no, they just give up. I wanted to be a voice saying, no way, you have to keep going,” said Jones. “Had I stopped pushing I wouldn't be here today. People told me to come up with a plan B and that I should look into other majors. That’s why I push positivity and encouragement so hard on social media. I hope my determination shows others what they are capable of accomplishing when they set their minds to it.”

When Jones contracted the virus, she explained it was natural to share updates on her and her family’s health on her social media platforms.

“Becoming a social media influencer was accidental. I didn't expect my posts to reach the magnitude they did. It was very shocking,” said Jones humbly. “I just wanted to let people know the virus was real. So many people were concerned for me and my family. We were surprised to receive monetary donations, which saved us because I was unable to work for five months. I'm not angry that it happened to me. I believe by sharing my stories and hardships with others, God uses me as an example of faith and perseverance.” 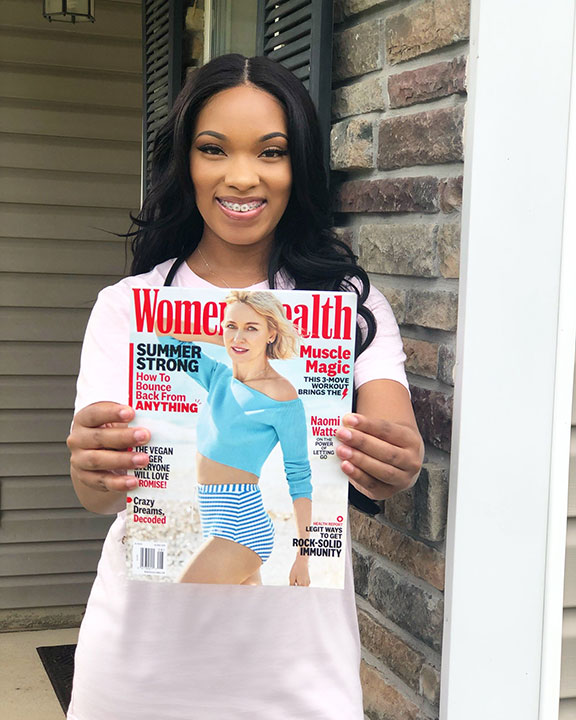 Jones’ social media presence, which includes 32.9K followers on Instagram and 4.01K on YouTube, soon attracted the attention of countless magazines and TV networks interested in telling her story.

“Women's Health magazine contacted me first, followed by The Oprah Magazine online,” said Jones, who went on to explain she turned down many requests after those interviews were complete, including Jimmy Kimmel Live.

In addition to being a nurse and mother, Jones is also the founder of Pretty Practice which inspires, empowers, and mentors women in and out of their professional lives. “I want women to feel supported in all areas of life because it can be hard to find that balance sometimes,” she said. “There is also a lot of competition when it comes to women in healthcare. I wanted to foster a feeling of sisterhood and community.”