Janet Reed, MSN, RN, CMSRN, Associate Lecturer at Kent State University Stark, always enjoys incorporating new creative ideas in her classroom. After observing her undergraduate nursing students struggle with heightened anxiety during traditional simulations over the years, she desired a way to make the experience more fun and less stressful. In February 2020, she introduced her students to the nursing simulation escape room, a project she developed as an assignment in her Ph.D. course, Teaching with Games and Simulations.

“I was able to obtain a small grant from Kent State University to cover the supplies I purchased for the escape room,” said Reed. "My advisor, Dr. Ferdig, helped me with the IRB requirements as my goal was for this to be a pre-dissertation study.”

For the pilot study, Reed’s junior nursing students had yet to experience a face-to-face simulation on an adult manikin. Fourteen students were divided into groups of four or five and completed a pre-simulation test to measure their anxiety levels. They were then brought into the lab, shown the equipment they would be using, and received a pre-briefing orientation to the room and how the simulation would work. The groups knew they were competing against one another for the fastest escape time.

“The initial clue, along with the rules of the game, was in an envelope. It set up the patient scenario stating he had been admitted for pneumonia. Students had two objectives; first, find the escape room key and leave before the 20-minute timer ran out. Time started when I handed them the envelope,” explained Reed. “Their second objective was to actually take care of the patient like they would in a normal simulation, by performing an assessment and administering the necessary medication correctly. The catch, all of the nursing care supplies they needed were in locked boxes, so students would need to solve clues and puzzles to figure out how to get the boxes unlocked.” 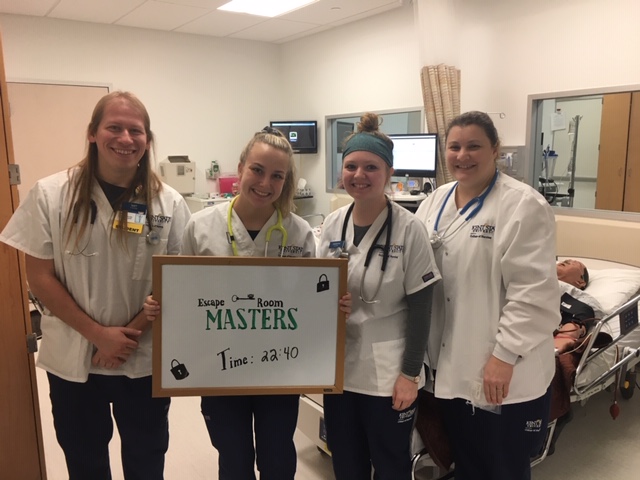 There were two different pathways in the game. If students gave the patient medicine he was allergic to, this caused a reaction that delayed the group. They would be forced to call the doctor, who would prescribe extra medications to treat the reaction. On the contrary, if students provided care correctly, they would escape faster. Reed described that eventually, both pathways led to the patient experiencing new symptoms, such as a low heart rate. At this point, students would need to call the doctor, who in this scenario, was Reed observing behind one-way glass.

“I instructed the students to attach the temporary pacemaker pads. When they went to the AED box, they found the final escape key. A paper explained they had escaped and instructed them to stop the timer,” said Reed. “Afterwards, students completed a post-test to measure their anxiety. It’s typical that when the simulation ends, anxiety decreases. But it was interesting that the levels of anxiety we recorded were extremely high. What we don't know yet is how much higher this particular group of students’ anxieties would be compared to a group participating in a traditional simulation.”

The following are some of the raving reviews Reed’s students made about the experience:

It was a fun way to run a simulation without the pretend professionalism that is hard to keep during a normal simulation.

The escape room simulation helped me to think quickly and make decisions on my feet.

I wish we had more simulation labs like this!

The escape room simulation game was fun and helped me learn.

I’m typically a quiet person, but the escape room provided an environment where I felt comfortable communicating freely.

Three groups participated in the initial escape room simulation. Reed shared that the first group was surprised when the timer when off because they had not finished the simulation objectives. The next two groups did progressively better with the winning group escaping with a time of 12:46. Reed said it was interesting because the group that won included a girl with previous escape room experience, so she stepped up and assumed a leadership role.

The groups were not permitted to observe each other during the simulation.

“One thing I was worried about was that the first group would spill the beans and tell the other groups what to expect. But that didn't happen. The first group did not want to give the others any hints because they did not want them to beat their time,” explained Reed. “However, once a group finished, the others were eager to find out that team’s escape time."

Looking forward, Reed hopes to continue using the escape room simulation as an introductory experience for caring for adult patients. Additionally, she stated it would be interesting to continue this research with a control group of students who participate in the same patient scenario but in a traditional simulation lab setting.

Reed received The Platinum Teaching Award which recognizes the dissemination of research in teaching.

“I’m honored to receive this award because I always enjoy trying new ideas in my classroom, but this is the first time I’ve researched and published the things I’m doing with my students,” exclaimed Reed. “It’s rewarding to see my work in print, share about the experience, and talk with others interested in implementing something similar in their classrooms.”

The following two studies were published from Reed’s research: