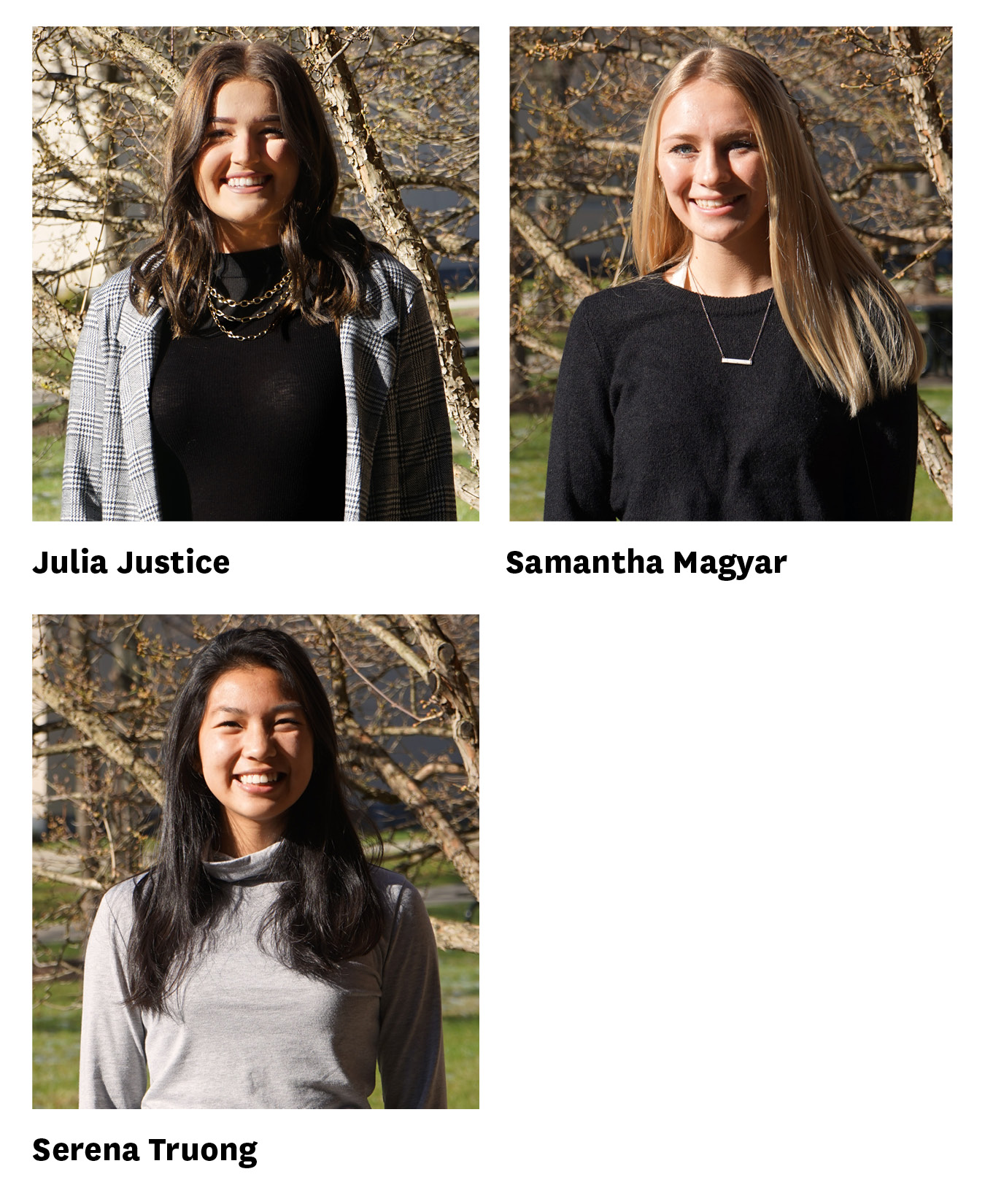 Three Kent State University College of Nursing students were the only undergraduate students selected to present their research during The American Association of Nurse Attorneys (TAANA) national conference in October. Due to continued social distancing recommendations, junior honor nursing students Julia Justice, Samantha Magyar and Serena Truong, who will all graduate in May 2022, along with their faculty mentor Kimberly Cleveland, JD, MSN, RN, C-MBC, lecturer, pre-recorded their poster presentation Adolescent Vaping: A Literature Review to Inform Policy Initives and Clinical Decision Making for the event.

“Our students did a remarkable job on their presentation,” said Cleveland. “Many conference participants reached out to me to comment on our students’ professionalism and the quality of their poster.”

Justice, Magyar and Truong were first introduced to research through an honor nursing course. They were appreciative that Kent State University Honor’s College and College of Nursing never forced or expected students to be eager to participate in extended research projects, but that both excelled in highlighting research collaboration possibilities. Their professor had invited faculty nurse researches as guests to speak about their areas of interest before pairing the students with a faculty mentor. Under Cleveland’s guidance, Justice, Magyar and Truong completed their introductory to research assignment for the class. While discussing possible topics, Cleveland encouraged the group to choose a topic that was personal to their lives. Recalling family members and friends who had or were currently struggling with vaping, the group decided to make that the topic of their project. A combined interest in pediatric nursing helped the group narrow their research focus to middle-school children.

What began as an introductory to research project for class, turned into an opportunity to dig deeper in order to more fully understand the difference between healthcare policy and law.  “At the conclusion of our class assignment, we didn't feel like we had taken our research far enough,” said Justice. “We all wanted to delve deeper into this topic and take it to a level where it could provide helpful insight into the issue of vaping. That’s when Professor Cleveland told us about the opportunity to submit our research to the TAANA conference.”

To take their project to the next level, Justice, Magyar and Truong integrated research within the healthcare profession to show how teaching kids the dangers of vaping, along with regulations on vaping, makes a difference in the outcome of negative health effects presenting in otherwise healthy children. They looked at various prevalence statistics, such as the number of people who report they vape, how individuals began participating in vaping, why they continue this behavior and the social aspect of vaping.

“We learned many, but not all, adolescents turn to vaping as a means to cope with body image insecurities, regardless of if they identify as male or female,” said Magyar. “There's so much pressure put on these young people from our society.”

Justice, Magyar and Truong wanted to apply their findings to both the implications for nursing practice, such as how to better educate patients, along with discovering what changes may need to be made to improve vaping regulation and policy. However, they were surprised by the lack of research into the topic.

“I was shocked by the lack of research conducted on vaping. It's almost as if this issue has flown under the radar. By presenting at the conference, we realized we could bring this issue to light and ignite momentum in regard to research and policy change,” said Truong. “This is beneficial because when we talk about bringing about policy change, there needs to be hard evidence to clearly show a direct correlation between a behavior and a health outcome.”

While Justice, Magyar and Truong admitted they were not initially thrilled with the notion of a class research project, this experience has opened their eyes to how research, and policy, affects everyone within the healthcare profession.

“Presenting for a national conference was a surreal feeling,” said Justice. “Having the opportunity to present our research to people who can actually enact the changes that need to occur is very rewarding.”

Magyar agreed, stating, “this has been one of the most rewarding things I have done in my college experience so far. Professor Cleveland was so patient with us as we learned to conduct research and engage with our topic. She always made it something we looked forward to doing, rather than making it feel like another assignment.”

Moving forward, Justice, Magyar and Truong hope to conduct their own research into vaping. “We've talked about doing our own study, but it has been delayed for the time being. We had planned to go into a local school and conduct a survey, but it's not the safest time for that right now,” said Justice. “Hopefully at some point we'll be able to gather our own quantitative data and compare it to our literature review and examination of other researchers’ findings.”

To their fellow students who may not be enthusiastic about research or policy, Justice, Magyar and Truong offered the following words of encouragement.

“If the opportunity to participate in research is presented to you, give it a chance,” Truong exclaimed. “You may find this is something you become really passionate about.” Justice continued, “health policy and research are so important. You may not realize it until you're involved in a project, but it affects every aspect of nursing. Even if you think you never want to be involved with research or policy, it's shaping everything around you. It's so much more important than you may realize.”