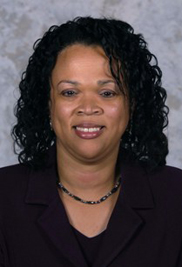 Angela Neal-Barnett, an associate professor in Kent State University’s Department of Psychology, was awarded the 2011 Harold K. Stubbs Humanitarian Award recognizing her important work in the study of anxiety disorders among African-Americans.

Neal-Barnett was honored at the 21st Annual Judge Harold K. Stubbs Awards Banquet on March 11 at the Hilton Inn West in Fairlawn. More than 300 guests attended the event.

Neal-Barnett is a nationally recognized expert in the area of anxiety disorders among African-Americans. Her work has focused on fears and social anxiety in African-American children, as well as sister circles for panic disorder and stress in African-American adults. She is a sought-after workshop presenter and speaker, and the author of Soothe Your Nerves: The Black Woman’s Guide to Understanding and Overcoming Anxiety, Panic and Fear.

Neal-Barnett founded and became CEO of Rise Sally Rise Inc., a company dedicated to helping women overcome anxiety and fear from a psychological, spiritual and black perspective. Her work has been featured on national media, including CNN, NPR and BET.

“I was shocked and humbled when I heard about this honor,” Neal-Barnett says. “Judge Stubbs was such a man of honor and integrity. The point of everything we do is to try and make a difference in the emotional well-being of African-Americans, and to be recognized for the work is truly incredible.”

Neal-Barnett earned her bachelor’s degree from the University of Mount Union and both her master’s and doctoral degrees from DePaul University in Chicago. She completed a prestigious postdoctoral fellowship in clinical research at the University of Pittsburgh School of Medicine Western Psychiatric Institute and Clinic.

Neal-Barnett has taught at Kent State for more than 20 years. Her research is supported by the National Science Foundation, National Institute of Mental Health, the Kent State University Foundation and the Ohio Commission on Minority Health. Neal-Barnett, who resides in Tallmadge, is listed in Who’s Who in America, Who's Who in American Women, Who's Who in Medicine and Health Care and Outstanding Americans.

Sponsored by the St. Paul African Methodist Episcopal Church of Akron, the Harold K. Stubbs Humanitarian Award recognizes those who have made contributions in areas such as social action, government, business, medicine and law.  The awards program honors Stubbs, a former Akron Municipal Court judge and Kent State alumnus. Stubbs was actively involved with the church, which since his death has annually recognized individuals for their community service with this award.