Professor just wrapped up his 46th year as a faculty member in the university’s Department of Psychology, and he has no plans of calling it quits anytime soon. 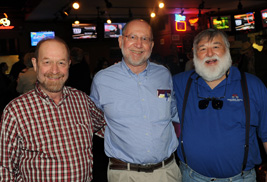 Kent State University Professor David C. Riccio just wrapped up his 46th year as a faculty member in the university’s Department of Psychology, and he has no plans of calling it quits anytime soon. From May 19 to May 21, Kent State’s Department of Psychology hosted a Festschrift to recognize Riccio’s life’s work and service to the university with a scientific meeting and a reception.

The scientific program on May 20 and 21 consisted entirely of presentations by Riccio’s former doctoral students, including keynote speeches by three of his most distinguished former students.

“David Riccio is quite remarkable, both as a faculty member and as a person,” says Maria Zaragoza, professor and chair of Kent State’s Department of Psychology. “Riccio is an eminent scholar, an outstanding teacher and mentor, and an exceptionally generous colleague. His influence and example have helped to shape a departmental culture of community and collegiality that is rather unique.”

At least 30 of Riccio’s former doctoral students attended the events, including folks from 15 states and one who came in from Australia. Both the reception and the programs were free and open to the public.

Steven Harrod, assistant professor at the University of South Carolina and former Ph.D. student of Riccio’s, was one of the speakers. He says that Riccio was the main influence in his decision to become a research scientist.

“Professor Riccio positively influenced my life as my mentor,” Harrod says. “One unique attribute of his is that he spends a lot of time with students who need it. He has accomplished just about everything that you can as a scientist, but I don’t think that is what drives him. I think he is driven by being able to work with students and teach people.”

Riccio has had a long and distinguished research career at Kent State. He has published more than 170 journal articles, had 40 years of uninterrupted research funding from the National Institutes of Health and the National Science Foundation, and received Kent State’s Distinguished Scholar Award. In addition, he is the recipient of the university’s Distinguished Teaching Award and has mentored 42 Ph.D. graduates.

“Professor Riccio has provided extensive service to the psychology department, the university community and his profession,” says Zaragoza.