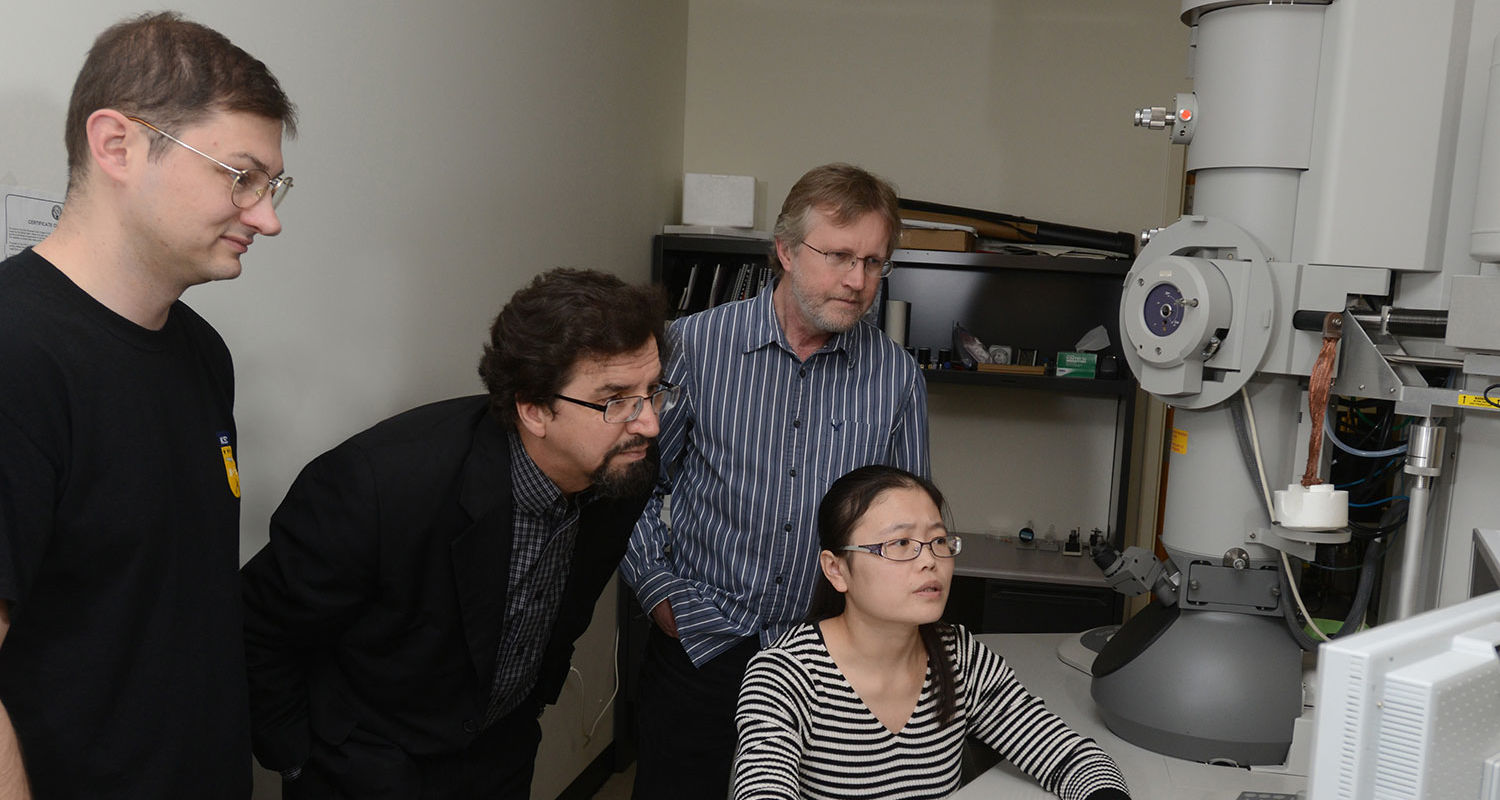 Twenty years ago, Antal Jákli’s research specialty, bent-core liquid crystals, took him to Germany, where he and his lab mates joked that the material they were studying looked like opals – it was so solid and colorful, it could have been used in jewelry.

Now he knows why. In a paper published Feb. 19, 2014, in Nature Communications, Jákli, Ph.D., professor of chemical physics in the Liquid Crystal Institute, and his research colleagues showed that the same material that he studied in Germany has structural color.

The TEM microscope was installed at LCI with funding from a $15 million Ohio Third Frontier grant. It allows researchers to examine and photograph thin slices of liquid crystals, seeing a three-dimensional view of structural patterns. The TEM is “the key to understanding nanostructures of lots of liquid crystals that we were not able to understand before,” Jákli said.

The article in Nature Communications describes experiments carried out in Jákli’s research group. The results were then analyzed and interpreted by Jákli and Oleg Lavrentovich, Ph.D., Trustees Research Professor.

They found that the liquid crystal had nanofilaments twisted together and stacked on top of each other in a “double twisted” structure, double because the filaments were themselves twisted into a helix, giving the blue color.

While the high-tech TEM was instrumental in the discovery, the researchers used a decidedly low-tech resource to visualize the structure: pasta. Jakli bought twisted dry pasta at a grocery ($2 a box) and they layered 300 noodles in a pan, lasagna-style, then vertically vibrated it for half an hour to see the resulting alignment.

Because the liquid crystal spontaneously forms a helix, it does not have the chirality, or left-handedness versus right-handedness, typically found in molecules. This is the first known structurally colored liquid crystal material with no molecular “handedness.” That would provide flexibility in manufacturing applications and could make the material ten times cheaper to use than materials with chirality, Jakli said.

Finding the double-twist structure and showing its role in the liquid crystal’s color offers new avenues for basic research, too. It expands a “rich world” of learning more about structural color throughout nature, Jákli said.

In addition to the TEM facility funding, the research project was supported by National Science Foundation grants.