I hope you are having a productive summer but also taking some time for a well-deserved break. I wanted to take a few minutes to update you on some of our current efforts to improve our rankings on criteria that are considered in making R1 designations and to make you aware of a new pilot funding program that we will implement in the Fall as a means of increasing external funding. I know that faculty are not on contract yet, but I wanted to give you time to think about this upcoming opportunity as it will be implemented very quickly in the Fall semester. For those who prefer to hear a verbal presentation, please watch the following 13-minute video. For those who prefer to read a written description, that is provided below.

First, it is important to remember that our primary goal is to grow and enhance our research and scholarship in the short- and longer-term. If we make smart, strategic, and fiscally responsible investments, we will not only progress towards this goal, but will also be well positioned to improve our position as an R1 institution.

As a reminder the criteria considered for Carnegie designations include:

These data are pulled from various surveys at differing time points. For instance:

Postdocs and NFRs - For the next designation period they will first pull the number of postdocs and NFRs that we report on the Survey of Graduate Students and Postdoctorates in Science and Engineering (GSS) survey completed this November. Following from our efforts to better measure number of NFRs and the pilot postdoc program we implemented, our value will be almost 3x higher than it was when we received the R1 designation.

Doctoral degrees conferred - Next, they will count the number of doctoral degrees conferred in FY23 (from July 1, 2022, to June 30, 2023). Obviously, many factors impact whether someone receives their doctorate in any given year, but by reviewing enrollment information we are attempting to estimate how many degree conferrals we can anticipate. Given current trends, this number is likely to be in line with the numbers we submitted when we received the R1 designation.

Research expenditures - Finally, they will consider the research expenditures incurred during FY23 as reported on the National Science Foundation Survey of Higher Education Research and Development (HERD) Survey. Expenditures are the area that we most desperately need to grow. Since expenditures trail awards, we have to first receive the dollars in order to spend them. Let’s look at our expenditures over the last eight years. 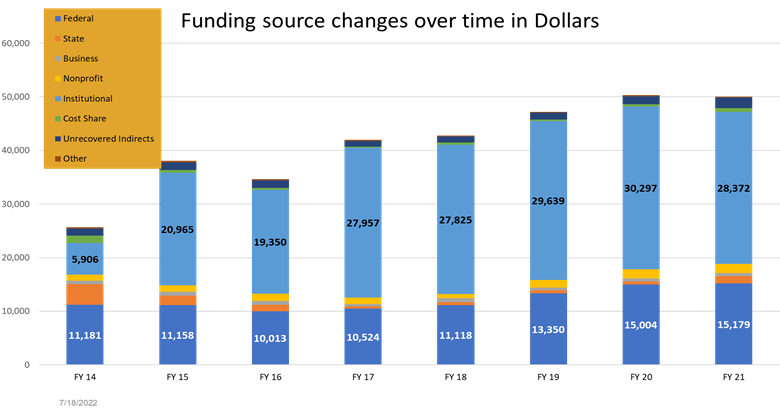 In this figure the light blue bars with black text show institutional expenditures in thousands of dollars (the amount that KSU is investing in research yearly) while the dark blue bars with white text show federal expenditures in thousands of dollars ($11,181,000 in FY14, $15,179,000 in FY21). What this shows is that we have grown ~4 million in 8 years (an average of 500k per year). Over the same period, we have made several investments to support research including the prior postdoc program that provided 30 postdocs to faculty across campus (at a cost of ~3 million), pilot money investments in the URC and research institutes, and numerous research development efforts. However, none of these investments resulted in a substantial return with respect to expenditures. It is important to realize that there are significant delays to counting ROI on research investments, and our current efforts may not manifest significant returns for 3-5 years. However, it is also clear that we need to dramatically increase the rate at which we bring in external funding in order to maintain our R1 designation and continue to improve our position as an R1 institution.

Okay, so we need to increase expenditures. In order to do that the first thing, we need to do is bring in more research funding so that we can spend it. But how are we doing on research grant awards? RASP processes a variety of awards each year and these are typically divided into research, instruction and other categories. Although last year awards were up $5 million (16%), this hides the fact that research awards dropped another 4%, having dropped 13% the year before. The following figure shows research funding (not expenditures). With less funding coming in, lower expenditures will trail. 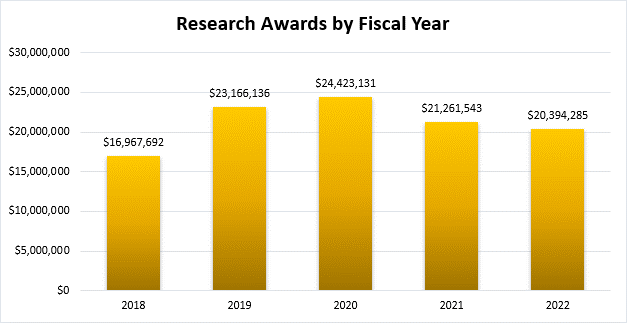 For us to strengthen our position as an R1 institution we need to not only reverse the direction we are headed, but also start increasing expenditures at a much faster rate than we have historically achieved. As part of our annual goal setting in RASP we have set our primary goal of increasing external funding by 50% in the next three years. This will require an increase in expenditures of 7.5 million, which I believe is a realistic goal.

How are we going to do it? We are proposing a three-pronged approach to increasing our external funding and resultant expenditures. First, we are focused on ensuring that we spend and appropriately count expenditures this fiscal year. Historically, we give back ~$1 million in funds each year (an incredible amount when you consider we expend only around $15 million). The primary contributor to this is failure to appropriately pay personnel via grant accounts. It is critically important that we focus on ensuring we are spending funds appropriately and in a timely manner. Second, we need to improve our hit rate on grants. To that end, we have formed an Office of Research Development that we are staffing with 3 individuals charged with working closely with faculty to ensure grants are of the highest caliber when submitted. Third, we are announcing our Game Changer Pilot funding investment that will occur this year. Whereas prior pilot funding has yet to show an appreciable impact on research funding/expenditures, RASP is providing a higher level of funding with the sole focus of increasing external awards and expenditures substantially in the next three years.

At the start of the academic year, we will release a call for proposals for funds that:

Given that we will need to release a call, provide time for proposals to be written, establish a review committee and process, award funds, and have them spent all during FY23, we wanted to make you aware of this opportunity so that you could start thinking about possible ways that funds could increase your and your collaborators’ external funding. There are no restrictions on what one can apply for, but equipment purchases/repairs that have direct impact on number and success of proposals is one example. Alternatively, quick data collection that would inform multiple proposals may also be appropriate. These are just a couple examples; any expenditure that will increase the number and quality of subsequent external (federal, state or industry) proposals are welcome. We are in the process of finalizing the parameters of the call for proposals as well as the application and evaluation process and will provide additional information at the start of the semester.

We will also be hosting a number of upcoming town halls and sending out additional information regarding our plans for improving our research funding and further strengthening the university’s culture of research and scholarship, so please be on the lookout for communications on the RASP listserv.

As always, I am happy to answer any questions, and I wish you a healthy and productive remainder of the summer,
Doug