Kent State University’s only theoretical astrophysicist just landed a grant that will help her to better understand dense stars while encouraging young female scientists to reach for them.

Dr. Veronica Dexheimer, an assistant professor of physics in Kent State’s College of Arts and Sciences, recently received a five-year $425,000 Faculty Early Career Development Award from the National Science Foundation (NSF). The award honors her as one of the most promising up-and-coming physicists and provides funding for five years of research and educational outreach. 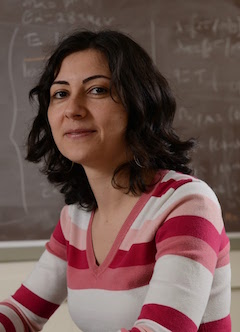 Dexheimer earned her Bachelors (2003) and Masters (2006) degrees in physics from Universidade Federal do Rio Grande do Sul, in Porto Alegre, Brazil, and her Ph.D. (2009) at Johann Wolfgang Goethe University in Frankfurt an Main, Germany. She taught at Gettysburg College from 2009-2012, then conducted research at Universidade Federal de Santa Catarina in Florianopolis, Brazil, before joining Kent State in 2013.

Her project, titled “Dense Phases in Neutron Stars,” seeks to show that some of the most highly-dense structures in the universe are home to a rare and exotic type of matter.

Neutron stars form when massive stars explode and gravitationally collapse. When this occurs, the hadrons (protons and neutrons) and electrons from individual nuclei combine into something that resembles a giant nucleus of the size of a city.

“We know if we squish atoms enough, we get rid of the empty space and create a new kind of nuclear matter, which we are 100 percent sure exists in the core of these stars,” she said. “But if you squeeze them enough, they’re going to overlap.”

In such conditions, the hadrons don’t have enough space to exist, so quarks — the building blocks for all hadrons — effectively exist freely, as “deconfined quark matter.”

Scientists believe deconfined quark matter has not naturally existed in the universe since the fraction of a second immediately following the big Bang. Dexheimer will attempt to determine whether neutron stars are dense enough for this kind of matter to exist.

“The thing we do not know is if the density and temperature inside neutron stars are high enough for this to happen,” Dexheimer said. “If it does not exist there, I cannot think of any other place in the universe where it might exist in a stable form.”

Scientists can only observe stars from the outside, so determining their interior composition is almost entirely theoretical. In 2017, however, the Laser Interferometer Gravitational-Wave Observatory (LIGO) operated by MIT and Cal Tech, and VIRGO — a collaboration among 20 different European research groups — observed for the first time gravitational waves, the byproduct of a black hole-black hole merger. Shortly thereafter, they observed the same phenomenon from the merger of two neutron stars.

Dexheimer works in relativistic quantum field theories to help her collaborators in Germany simulate neutron star mergers that would produce a larger amount of deconfined quark matter. Once they replicate these conditions, they can compare their theoretical predictions  to the observations made by LIGO and VIRGO.

For the educational outreach portion of her grant, Dexheimer plans to invite young students from area high schools to come to Kent for lectures by female astrophysicists.

“Many parts of physics have more balance of men and women, but some areas of research have very few women,” she said. “So I think it’s pretty important for the new female generation to understand that it’s normal and acceptable to be a scientist, and they should be encouraged to become one.