Research shows that women are more likely to develop Alzheimer’s disease than men by a 3 to 2 margin. Some scientists believe this is because when women reach menopause, their bodies cease to produce estrogen, and the pituitary gland begins over-producing another hormone, luteinizing hormone (LH), to try to jump-start the ovaries.

“So if the hypothesis is that LH receptor signaling goes down, and that receptor is what facilitates cognitive function, then by removing this in normal mice, we should see cognitive deficits,” she said. 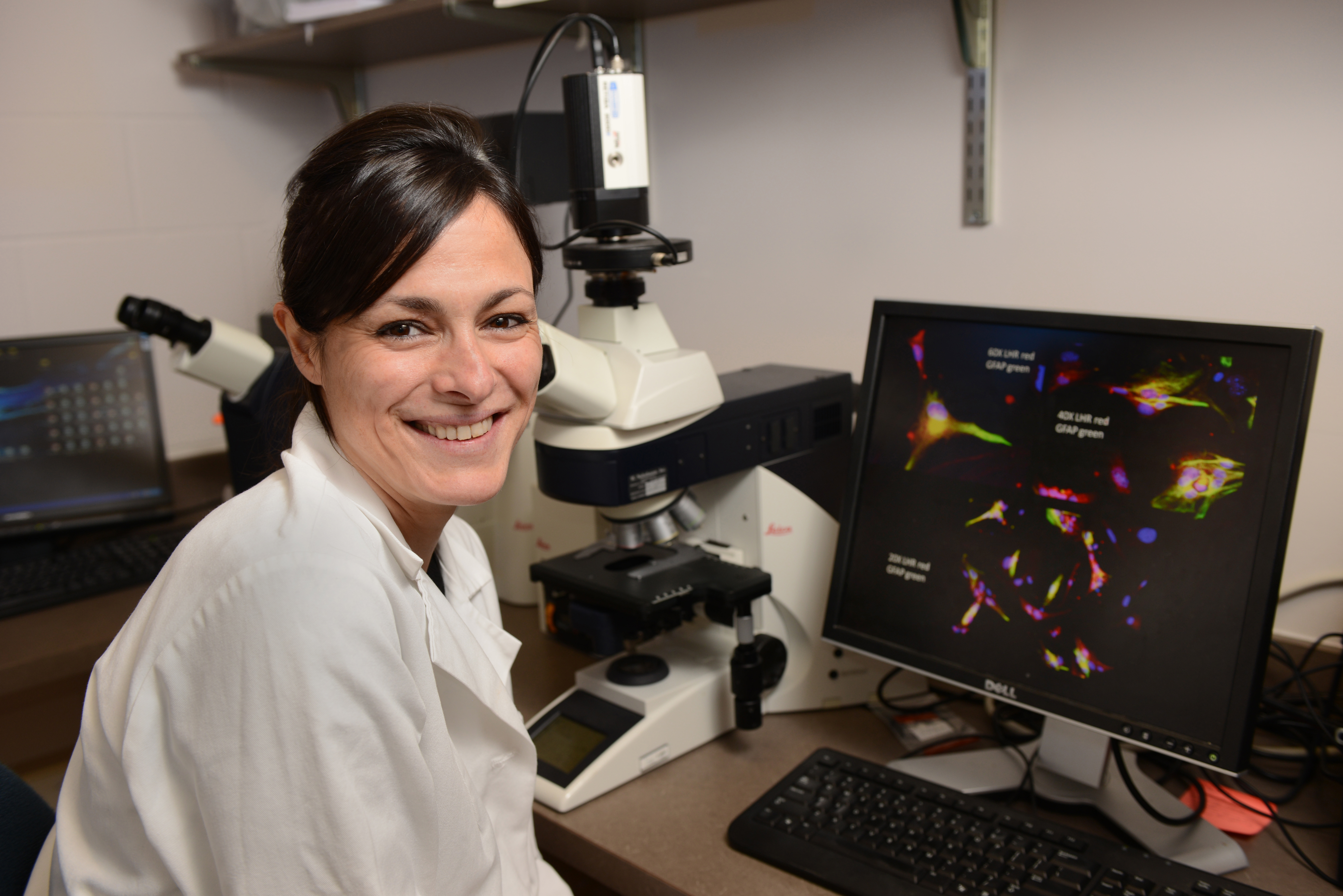 This hormone adjustment can have devastating effects on women’s cognitive health, and some scientists now believe it may contribute directly to the onset of Alzheimer’s.

“So we’re going to ask two questions,” Casadesus Smith said. “One, what is the role of the LH receptor in normal memory function, and two, how do the LH protein and receptor influence the Alzheimer’s phenotype? What do they do to pathology, to memory?”

Casadesus Smith’s project titled “Mechanisms of Gonadotropin Action on Cognition and Neuronal Remodeling in Aging and Alzheimer's Disease” represents the biologist’s second NIH/NIA grant in as many years. In 2016, she received a three-year, $444,000 grant from the agency to research the potential benefits of the synthetic hormone Pramlintide in models of Alzheimer’s disease.

Casadesus Smith said her newest award highlights the scientific progress that has been made in her field of study in just a short time.

“I think the concept that LH is relevant had to mature, because I submitted a similar grant a while back and it ended nowhere. It was too abstract and there were too little data at the time” Casadesus Smith said. “But in these last few years there have been more papers published (including three by Casadesus Smith), so now it’s more established that LH has a role in the brain.”

Some women try to supplement estrogen levels with hormone replacement therapy to reduce the symptoms of menopause. What they don’t realize is that the hormone is no longer useful and can actually raise the risk of dementia and Alzheimer’s, and increase the risks of stroke, breast cancer and cardiovascular disease if the regimen is started too late.

However, when luteinizing hormone floods the bloodstream to try to re-start estrogen production, this has the same damaging effects on neuronal plasticity, a key factor in cognitive health. Casadesus Smith said that’s because when LH increases in the bloodstream, it decreases in the brain, causing loss of neuronal plasticity and cognitive function.

Casadesus Smith said the grant will fund the use of cutting-edge gene-editing technology to recode DNA to eliminate LH receptors. By removing both the LH protein and the LH receptors in both normal mice and mice with Alzheimer’s characteristics, then comparing the effects, she hopes to determine if LH loss in the brain is related to memory function, and at least partially responsible for Alzheimer’s development.

Casadesus Smith said reducing luteinizing hormone in the bloodstream while elevating levels in the brain may reduce the severity of both neuronal menopause symptoms in women and hopefully prevent or slow down the development of Alzheimer’s disease.

Updated 10/5/17: This story was updated to reflect the increased amount awarded for this grant.