Single molecule biophysics sounds complicated because it is. Then again, so is cancer.
So it makes sense that one of Kent State University's molecular biophysicists would take on the most notorious challenge in medical science.
Now Dr. Hamza Balci, an associate professor of physics in Kent State’s College of Arts and Sciences, has at least one powerful ally — the National Institutes of Health (NIH). The agency recently awarded him a three-year $437,600 grant for his project, titled “Influence of small molecules on G-quadruplex stability, folding kinetics and interactions with proteins.” 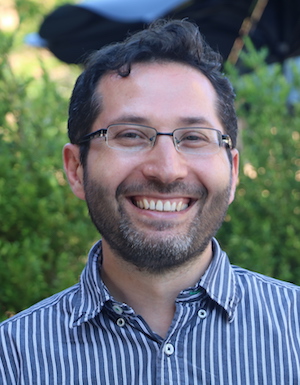 He hopes to help develop more effective pharmaceuticals, which would attack cancer at the molecular level by strengthening a genetic feature that prohibits cell replication.
“Instead of studying the average behavior of thousands and thousands of molecules, like in traditional biology, we put these molecules on a surface and we image them with single molecule fluorescence microscopy, so we can see individual molecules and their behavior,” Dr. Balci said. “You get a more detailed, accurate picture.”
Dr. Balci’s lab focuses on the G-quadruplex, a cluster formed in DNA nucleotides with high amounts of the nucleobase guanine.
Such nucleotides are found at the ends of DNA strands in human chromosomes. At the end of every double-helix strand is a single-strand tail called a telomere, formed by thousands of nucleotides in a repeating sequence — GGGTTA.
Every time a cell divides, some nucleotides are lost and the tail shortens. If the tail reaches a critical length, the cell stops replicating (senescence) or it dies (apoptosis). This is common among nearly all cells.
Cancer cells, however, can replicate quickly without dying because of a protein called telomerase. This protein lengthens telomeres as cells divide, preventing cell death.
While G-quadruplexes do form at the ends of telomeres, Dr. Balci’s work also extends to those that form on regulatory sites. These structures play a role in determining whether or not a specific protein will be expressed, and how much of it to make.
The stability of G-quadruplexes allows them to act as roadblocks, and they most often prevent protein expression. In cancer cells, G-quadruplexes are known to block telomere extension.
However, certain proteins in the body can cause G-quadruplexes to break down.
“You can see why the single molecule aspect comes into the picture,” Dr. Balci said. “Being able to see individual molecules, and watch in real time how they work, gives us a lot of information on what type of mechanism the protein uses to destabilize the G-quadruplexes.”
He said pharmaceutically administering molecules that stabilize G-quadruplexes in cancer cells could prevent them from lengthening their telomeres, forcing them to abide by regular rules of senescence and apoptosis, thereby inhibiting cancer cells from multiplying.
“We take those G-quadruplexes and conduct measurements with various small molecules, and study the stability against the proteins that are known to destabilize G-quadruplexes,” he said.