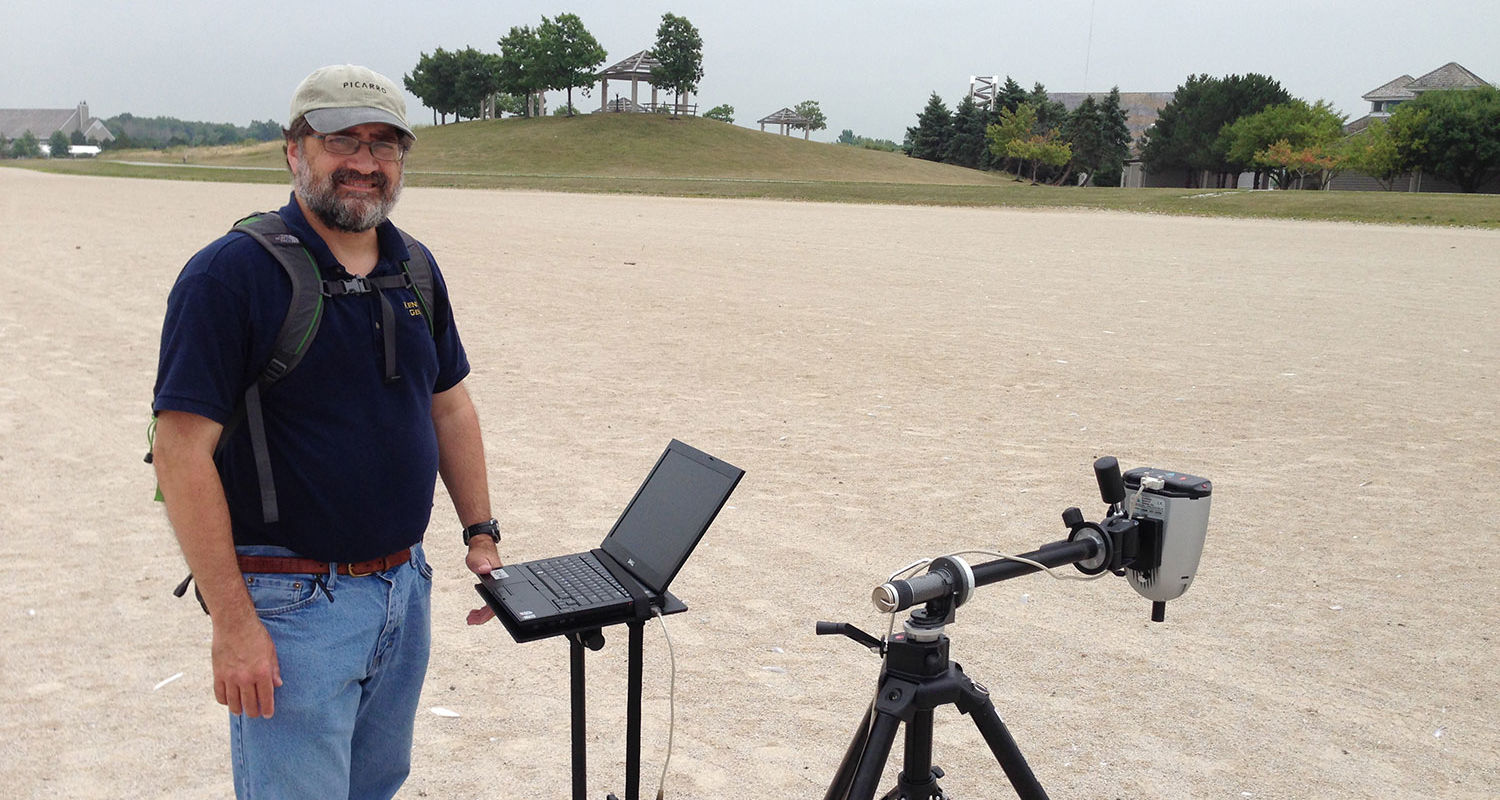 Over the vast expanse of Lake Erie, sampling the water to test for potentially toxic algae blooms may seem like using a medicine dropper in an ocean. It takes days to collect enough data from enough spots to determine if the algae pose a danger.

To cover a larger area more efficiently and better predict future algae blooms, Joseph D. Ortiz, Ph.D., professor of geology in the College of Arts and Sciences, is gathering data from an instrument on board the International Space Station – a hyperspectral imager. From space, it can image the entire lake in two days.

In his laboratory at Kent State, he breaks down the signal from space and compares it with water samples gathered directly from the lake and analyzed with a similar instrument in the field. Different pigments absorb and reflect light differently; he looks for pigments such as chlorophyll, the green pigment present in many algae.

He then applies statistical methods to determine the amount of algae, its scope and its potential effect on water quality.

During the recent toxic algal blooms in Lake Erie that led to a shutdown of Toledo’s water supply, Ortiz was part of a NASA-led group of researchers monitoring the problem. He helped to coordinate field sampling among groups that included the U.S. and Ohio environmental protection agencies, other universities and governmental agencies.

A marine geologist with an interest in geological oceanography, climate change and aquatic biology, Ortiz first used remote sensing as a graduate student at Oregon State University and later as a research scientist at the Lamont-Doherty Earth Observatory at Columbia University. He is among a small group of researchers worldwide using remote sensing technologies to study marine sediment recovered from deep-sea cores.

When he came to Kent State in 2001, he began applying these methods to study lakes. Lakes pose more problems for visible remote sensing than oceans – they have more complex mixtures of organic matter and sediment that can muddy the waters, so to speak.

NASA Glenn Research Center in Cleveland flew a research airplane at 11,000 feet and lower over Lake Erie’s Western Basin to collect high-resolution images of the lake during the height of the algae crisis in the summer of 2014. Information from those flights helped Ortiz learn how atmospheric aerosols can skew remote sensing results from space. The data collected will allow researchers to make atmospheric corrections.

In the future it may be possible to develop new and updated algorithms to predict the nature of phytoplankton blooms – not all algae blooms are toxic -- in order to better understand how algae respond to different temperatures and levels of nutrients in the lake, he said. Scientists are still studying why last summer’s algae bloom was so bad. It did not extend as far as the 2011 bloom, and it was more diffuse, spreading with the persistent rain. It developed quickly after a delay possibly caused by the cold winter.

Setting a Baseline on Blooms

His research will help provide a baseline profile that can be used to assess the effectiveness of any measures taken to slow algae growth. Limiting fertilizer run-off into the lake, reducing phosphorus and repairing combined sewer overflow systems are among the suggested solutions.

Ortiz also studies blue-green algae in Grand Lake St. Mary southwest of Toledo, the largest inland lake in northwest Ohio and one that has five times higher microcystin levels - the toxin that tainted the water in Toledo - than Lake Erie. The dominant blue-green algae in Grand Lake St. Mary is a different type than that found in the Western Basin of Lake Erie, although both can produce microcystin. Understanding how they differ will help improve their identification by remote sensing methods.