Andrea Case sits at a table in Kent State’s Center for the Visual Arts, carefully contemplating the silhouettes of leaves printed in bold contrasting colors on the paper in front of her.

“As a non-artist, I still feel comfortable having an opinion about this art, and trying to figure out what it means, and if I like it,” she said. “But I think people don’t quite approach scientific information in the same way if they’re not a scientist.” 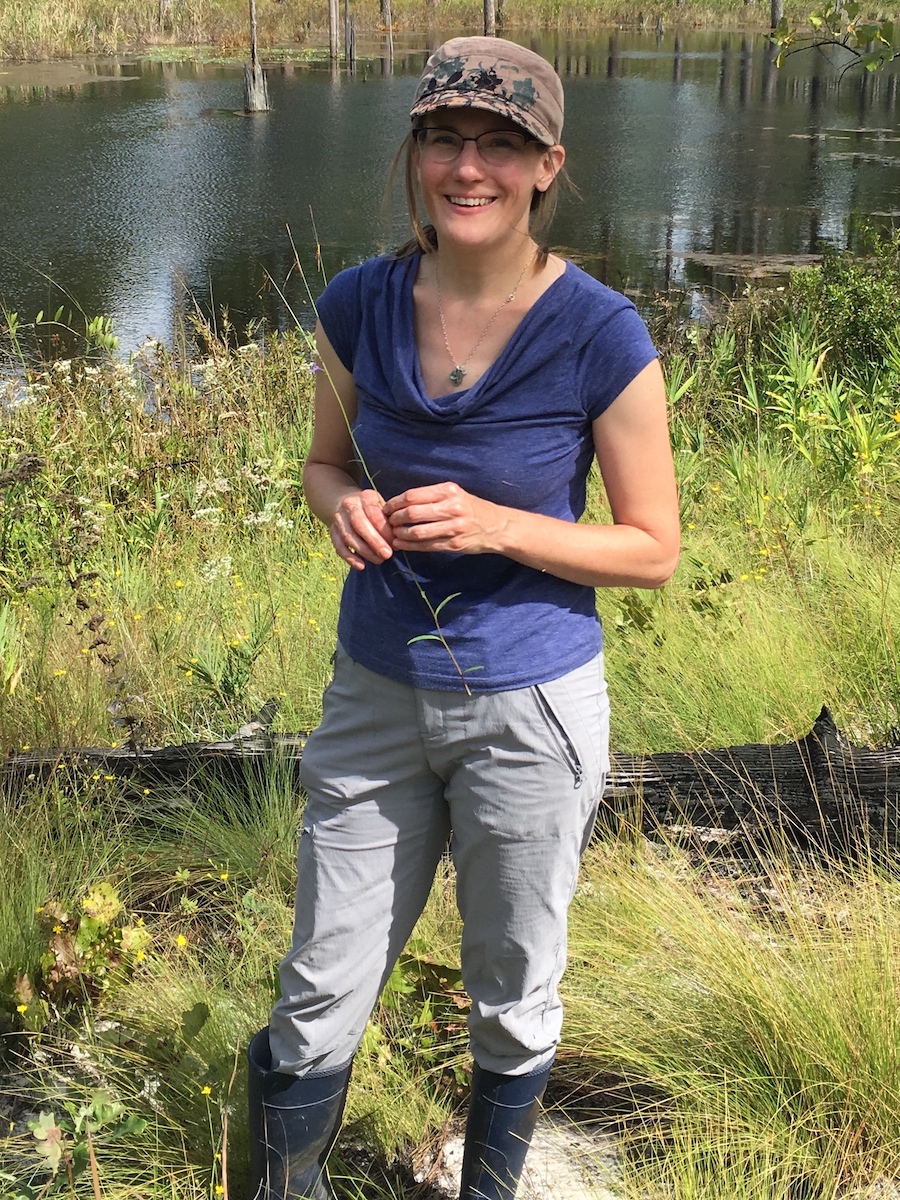 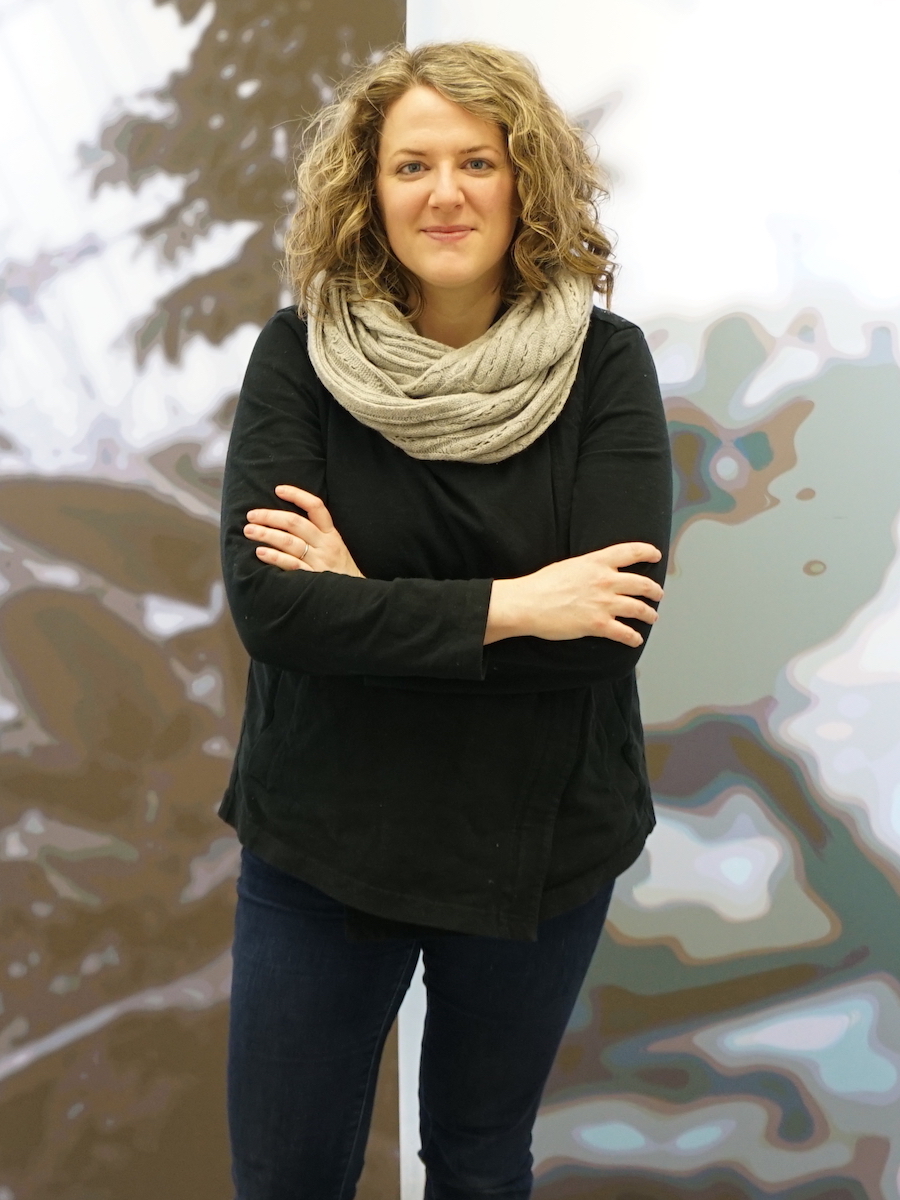 Dr. Case should like the piece; as an associate professor of biological sciences, she stepped out of her comfort zone to help create it.

Now the evolutionary biologist sits across from her collaborator, Taryn McMahon, MFA, an assistant professor of studio art at Kent State, focused in print media and photography.

Before this project, McMahon approached the plants in her prints from an art historical point of view. Through this project, she has deepened her scientific understanding of the botanicals in her work. Her thoughts about the finished product echo what both scholars came to understand.

“Beauty as a tool is a really interesting thing to think about,” she said. “We can tell people about environmental impact all day long, but then the question is how do you get people to care about that, and beauty is this amazing tool that draws people in and keeps them from looking away.”

Their print, entitled "Layered Similarity," is now on display at a gallery in Stockton New Jersey, part of a larger project, “Intersecting Methods,” by Matthew McLaughlin, a Maryland-based artist and curator.

“The idea behind the portfolio was an experiment of its own,” he said. “Specifically, printmakers dream up the imagery, experiment with their mediums, proof their plates, manipulate the variables, and proof again to be able to create the desired results in the final edition. Scientists, engineers and others in related fields work through similar steps in conducting experiments and attempting to prove or disprove a hypothesis.”

McLaughlin completed the first portfolio in 2014 and has coordinated one every two years since. He contacted McMahon in summer of 2019. As a member of Kent State’s Environmental Science and Design Research Initiative (ESDRI), McMahon worked with Chris Blackwood, professor of biological sciences and ESDRI co-director, to find a scientific counterpart. 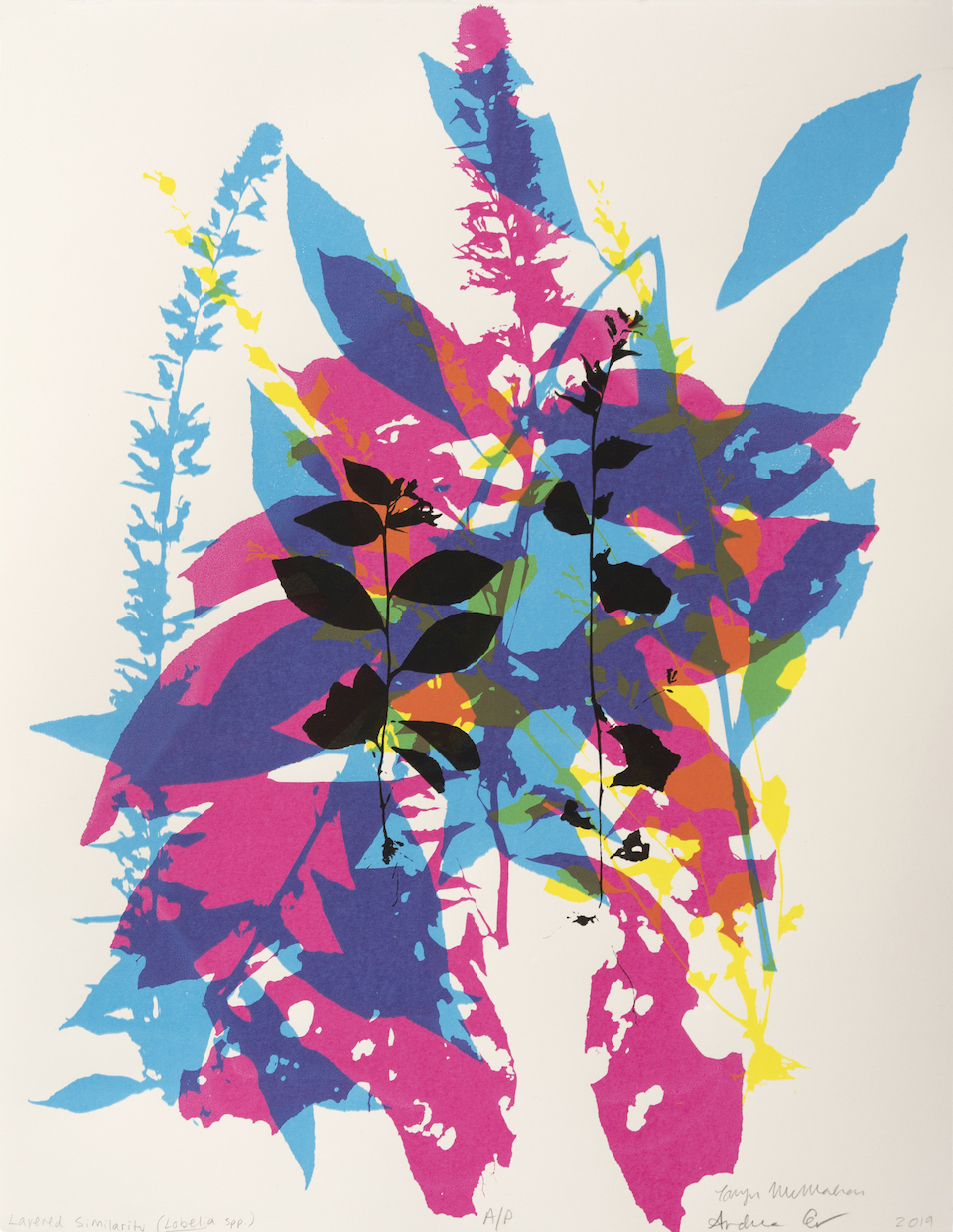 “He gave me some names of people whose research aligns with what I’m interested in with my own work, which is plants and ecology, and drawing on close observation of those kinds of natural forms,” she said. “So, I looked up Andrea’s research and was really interested in what she was doing.”

Case’s recent work focuses on plants in the genus Lobelia.

Lobelia is a large genus with a broad range of species worldwide. While some can thrive almost anywhere, others are uncommon and localized to very small areas. Case wants to know why.

She is the acting curator of Kent State’s herbarium, where biologists like her preserve plant specimens using a process very similar to the method artists like McMahon use for printmaking.

“When you preserve plant specimens, you dry them and then glue them to a piece of paper. A lot of them end up looking like this,” Case said. “So, one of the reasons we ended up with this design is because we were looking at herbarium specimens. My intention was to show Taryn how the fine details really matter, and she noticed that her prints are exactly the same size as the herbarium sheets. The dimensions are the same, and the way you put a plant on an herbarium sheet to make a specimen in the museum is like what she’s doing here.”

They discovered other similarities along the way.

“To learn how to tell these species apart from one another, I had to learn how to look at the tiny little details,” Case said. “And it’s obviously really important in science to be meticulous and careful, and to document and observe.”

“When learning how to draw, people always think it’s about staring at the paper, and it’s not,” said McMahon. “It’s about staring at the thing you’re drawing, about understanding how it works, about that close observation. You can’t draw it until you understand it.”  McMahon said the process of working with Case on the print reminded her of one of her major influences, the 17th-century artist Maria Sibylla Merian.

“She made a lot of drawings and prints that were considered both artistic and scientific,” McMahon said. “They were used by scientists because traveling wasn’t so easy then, so her prints and drawings were used to study specimens that people couldn’t go to see themselves.”

McMahon didn’t have to go far to find the specimens for this print, however; some of the Lobelia came right from Case’s backyard here in Kent.

Once they had their specimens, they set to work, making more than 30 hand-pulled copies of the print. Twenty-six of them will go into portfolios given to each of the 26 artists invited to participate in McLaughlin’s project.

McMahon and Case will also keep artist’s proofs for themselves, as a reminder of what they learned together.

“[French Philosopher] Bruno Latour has said that, through art, matters of fact for scientists become matters of concern. I think that’s really true,” McMahon said. “Art is a different kind of communication than language. It’s a very impactful way of saying something while also leaving room for dialogue, and it requires the person looking at it to complete the artwork. They have to make the ultimate sense of it, and by then they’re invested in making sense of it.”