A team of Kent State researchers took top prize at the Burton D. Morgan Foundation’s LAUNCHTOWN SOARTM Competition, held at Baldwin Wallace University in April, beating teams from Case Western Reserve University, Cleveland State University, and the University of Akron.
Their winnings ($7,000) will allow the team to further develop a device which could solve an age-old problem for diabetics.

The device, called a “Shear Force Mat,” represents a breakthrough for physicians seeking to understand the formation of plantar ulcers — one of the most prevalent and dangerous problems facing diabetic patients.

The device was developed and built by KSU alumnus Dr. Misha Pevnyi and Tianyi Guo, a graduate student in KSU’s Chemical Physics Interdisciplinary Program in the Advanced Materials and Liquid Crystal Institute (AMLCI). The project, funded by a grant from the Ohio College of Podiatric Medicine, was overseen by Dr. Peter Palffy-Muhoray and Dr. Hiroshi Yokoyama — both in the AMLCI — and Dr. Vincent Hetherington, Professor of Podiatric Medicine.
“This is a significant accomplishment,” said Kent State Technology Commercialization Director Stephen Roberts. “The team had just completed a seven-week I-Corps@Akron program, and conducted interviews with 18 podiatrists. The judges were impressed that the inventors had actually spoken with potential customers. This is a great example of the value of getting out of the lab and talking to end users.” 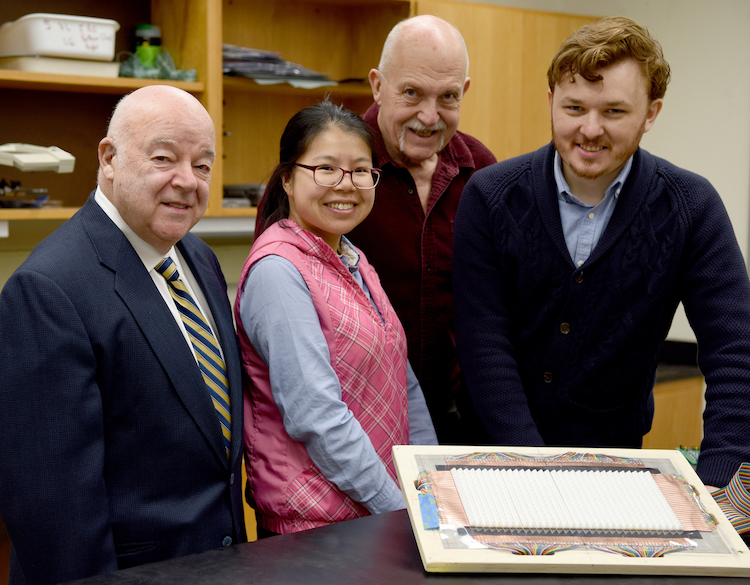 "The KSU Shear Force Mat team identified an urgent medical issue and offered an innovative technological solution to address this need in the near term," he said.

Unlike direct forces, created when the foot comes straight down, shear force pushes one part of the body in one direction and another part in the opposite direction.

“It has long been believed the plantar ulcers in diabetic patients form at areas of highest plantar pressures,” Dr. Hetherington said. “However, the correlation of plantar pressure and ulcer formation is unclear. Many researchers have long believed there was a missing link.”

Little bigger than a large computer keyboard, the platform is made mostly of pyramid-shaped pressure plates that were 3D printed in Palffy-Muhoray’s lab, with a pivot plate on top, and electrodes and a microprocessor for data-collection beneath. The data is automatically uploaded to a website for instant access and monitoring.

“The device is the first of its kind,” said Dr. Palffy-Muhoray, “and there’s this really nice aspect of people really putting effort into it, not for money or even the prospect of money, but just to do a good thing for sick people.”

Hetherington said the next steps include improvements of the prototype and clinical testing, followed by use of the technology as a medical analysis tool. Future goals include developing a device for in-shoe application.

Guo said the experience has been valuable.
"I was thrilled to have the opportunity to represent our team at the LaunchTown competition,” she said. “I am grateful for the guidance from my mentors at Kent State University and AlphaMicron, Inc. and for the support from both I-Corps at Akron and LaunchTown. I learned a lot about entrepreneurship during the past three months!"

Return to May 2019 Newsletter