Global warming is a serious threat to human life on Earth. The Kent State Clean Energy and Sustainability Research Team works diligently to provide research, insights, and breakthroughs to the ever-evolving field of Fuel Cells, a practical technology for major reductions in greenhouse gas emissions.

Why do we need Fuel Cells?

Humanity shares the Earth with a variety of different species and animals. As Green House Gas (GHG) emissions increase, and more habitats are being destroyed, many species suddenly face a looming threat: extinction. Currently, scientists estimate that Earth is undergoing the sixth major mass extinction event, the only difference being that while mass extinctions in the past were caused by natural disasters, the current one mainly has to do with the role of human activities on the planet. The largest ingredient in green house gas is carbon dioxide (CO2) produced by burning of fossil fuels such as coal and petroleum products, all of which contain carbon.

Oil and coal energy production is a dying industry as Earth enters the 21st century. As social awareness rises, the demand for lower CO2 emissions increases. The new millennium brings with it a new challenge: The Race for Clean Energy. Governments around the world are competing for a head start in what is sure to be a pivotal point in history for all of Earth’s species. Some steps have been taken to reduce CO2 emissions, but society has a long way to go before becoming emission-neutral. This will require new energy sources (wind, for example) and, for many years, a much more efficient use of fossil fuels.

Globally, standards have risen, but society has a long way to go before becoming an emission-neutral body. Fuel cell technology provides a viable clean energy solution in both mobile and stationary environments.

What is a Fuel Cell?

Fuel cells are power sources. A fuel cell is an electrochemical device that directly and efficiently converts chemical energy in a fuel to electricity.

How do Fuel Cells work?

A fuel cell is an energy conversion device. This is much different from a battery. While a battery holds and stores energy inside it, fuel cells work much like gasoline engines; they must always have fuel to produce electricity.

The fuel, in this case hydrogen, enters the fuel cell from the anode side. It diffuses through a porous electrode material and oxidizes. When you add two hydrogen atoms to one oxygen atom, you produce water (H2O). This oxidation of hydrogen thus produces two things: electricity and water. No greenhouse gases are emitted from this process. Operation on a hydrocarbon fuel such as natural gas does produce greenhouse gas, but the amount is greatly reduced due to the fuel cell’s high efficiency. 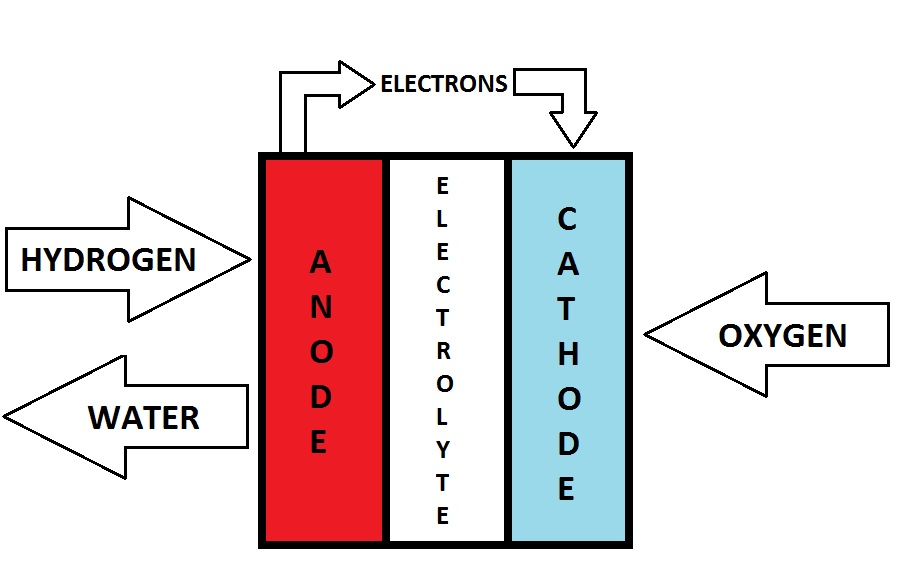 Fuel cells can also work in a reverse mode. This method is called electrolysis where the fuel cell acts as an electrolyzer. In fuel cell operation, hydrogen is introduced to the fuel cell, which is converted to water and electricity. When the cell functions as an electrolyzer, electricity is used to split water molecules into their component atoms: hydrogen and oxygen. The hydrogen produced from this process can then be stored and used in a later time to generate electricity through the fuel cell operational mode. Therefore fuel cells can be compatible with solar, wind, and other renewable/conventional technologies.