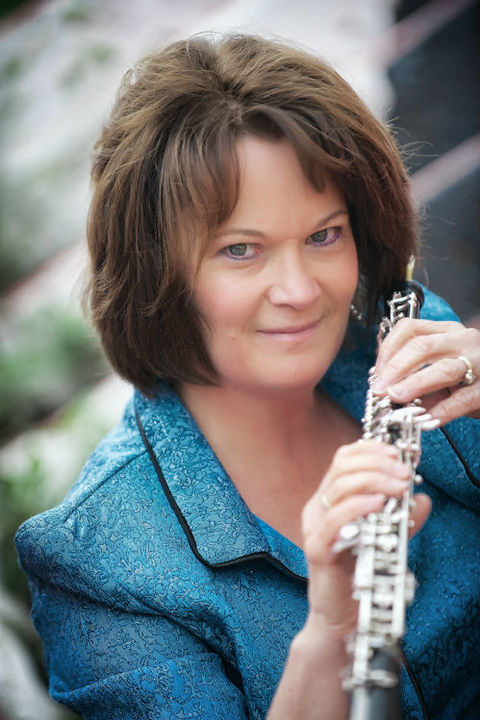 Danna Sundet serves as full-time Professor of Oboe at Kent State University. She is Artistic Coordinator of the Kent/Blossom Music Festival. Her artistry, broad range and versatility has its roots in her exotic upbringing. She grew up in Brazil, the Canary Islands, and Texas, speaking three languages fluently from early childhood. Danna moved to Cleveland in 1982 to study with John Mack and stayed. She received her B.M. from the Cleveland Institute of Music and her M.M. from Kent State University. Since 1987, Danna has been the principal oboist and regular featured soloist with The Erie Philharmonic. She is a founding member of Panoramico’s, a Cleveland chamber ensemble and serves as co-principal with the Trinity Chamber Orchestra. As a soloist and chamber musician she regularly collaborates with world renown musicians. She has recorded three CD's with Panoramico's, four CD's with WorldView International (now known as Ancient Path). She records regularly for Ludwig Publishing Company and can be heard on numerous educational CD's.

Danna specializes in performing in Bach Festivals, where she is a featured soloist on the oboe, oboe d’amore and the English Horn. These festivals include the prestigious Carmel Bach Festival and the Baldwin-Wallace Bach Festival. Sundet performs as extra with the Cleveland Orchestra as well as the Cleveland Pops Orchestra and the symphonies of Akron, Canton and Charleston, WV. She served as oboist with the former Cleveland Opera and Cleveland Ballet, and has served as principal oboe for touring ballet companies which include the National Ballet of Canada, the Houston Ballet, the American Ballet Theatre, the Pennsylvania Ballet, and the Miami City Ballet. In 2008 by invitation of the conductor, she was one of several performers from the US at the Cayman Islands Arts Festival.

Danna Sundet is now the musical Director of the John Mack Legacy Oboe Camp in Little Switzerland, NC, having had the honor of being chosen for that role by her oboist colleagues from all over the United States. Additionally, she is administering the archives and musical library of the late John Mack. In November, 2006 she organized an unprecedented concert of over 100 world renowned musicians who performed in Severance Hall as tribute and memorial for the late John Mack. She produced and performed on the John Mack Memorial CD.

Mrs. Sundet's enthusiastic and motivational style of teaching and her clear and logical approach to musical instruction heralds her as one of the most prolific and influential teachers of oboe students in the United States. Her students are dynamic soloists, chamber musicians and section players. She models to her students a high level of mastery, musical integrity and a hard work ethic that encourages them to become successful artists, teachers, arts managers and instrument repair technicians throughout the United States.