It could be argued that there is no science more valuable to us than that which helps to ensure the survival of our species, and answers questions to solve the problems that challenge it.

For many years, two Kent State researchers have been toiling over this matter. Last year, both received grants from the Eunice Kennedy Shriver Institute of Child Health and Human Development at the NIH — collectively totaling nearly $858,000 — to study the cellular mechanisms that regulate the formation and function of sperm and eggs.

Kline and Vijayaraghavan said roughly 15 percent of the United States population suffers from infertility problems, split roughly down the middle between men and women. 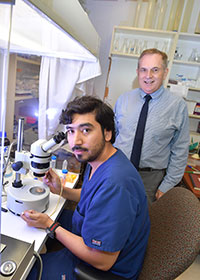 “Females have a variety of options available to them, both for infertility treatment and for contraception,” Vijayaraghavan said. “While males are presented with more limited opportunities.”

Fundamentally, gametes (a sperm or egg) combine to create an embryo.

Vijayaraghavan and Kline study the protein interactions and cellular mechanisms that make this happen in the individual gametes, and in the fertilization process, as well as what can cause failure.

Kline has continued his studies into the transformation of immature eggs into mature ones that can be successfully fertilized.

“We want to understand this process at the cellular level, with applications that may someday lead to better outcomes for fertility treatments in assisted reproductive programs, as well as expand our knowledge of the basic reproductive biology of all mammals.” Kline said.

Vijayaraghavan will delve deeper into the study of sperm function, studying the proteins involved with sperm motility. Because the female egg is idle, the hard work falls to the sperm to initiate fertilization.

“We want to know how sperm develop the ability to move and reach the egg and do what they need to do,” he said. “An immobile sperm means an infertile sperm.”

The work involves cutting edge genetic technology that allows Vijayaraghavan to take a novel approach in identifying the phosphorylation — addition of a phosphate group to a molecule — of proteins that regulate sperm motility.

“If this works, we will have identified important proteins that we can target for treatment,” he said.

Back to Healthy Communities Articles   View the Spring 2018 Research Magazine