From Refugee To Cancer Researcher

Nirmala Ghimirey Makes the Most of the American Dream

Ten years ago, Nirmala Ghimirey sat on the dirt floor of a hut in a refugee camp in Nepal, holding a tattered textbook in her hands. Today, she holds an honors degree from Kent State University, where she’s enrolled in a Biomedical Sciences graduate program, working toward her next contribution to cancer research.

Ghimirey has already earned herself a name and a reputation in national research circles, a mere eight years after her family arrived in America, speaking little or no English.

Ghimirey’s family — known as “Lhotshampas” or "southerners” — are among more than 100,000 Nepali-speaking Bhutanese people who lived in refugee camps in eastern Nepal during the 1990s, after being deported from Bhutan following years of violent oppression under the Bhutanese government. They arrived in Akron in 2009, when Nirmala was 14.

“I didn’t understand anything at first,” she said, “but it got better slowly.”

In 2010, her fortunes changed when she needed a calculator for her math homework. Donna Early, her family’s contact at the Red Cross — the agency that worked to provide basic amenities for refugee families — made a call to a friend of the program, Kent State Emeritus Dean and Professor, Dr. Terry Kuhn.

“Without Dr. Kuhn and his wife, Liz, I would not be here,” Ghimirey said.

Kuhn said he had three calculators on his desk when he received the call.

“I thought ‘what is wrong with this picture?’” he said. He went to Ghimirey’s house the next day. Soon, the Kuhns became involved with the Bhutanese refugee community. They provided looms and weaving materials, and helped the women find a place at a local farmer’s market to sell the goods they made.

When Ghimirey started high school, she had had no thoughts about going to college. “I don’t know if she’d ever considered college because it was just such a remote thought for her,” Kuhn said. “In the refugee camps, they never really thought of a future, they had only ‘today.’” But Ghimirey seemed to have a new determination once the thought entered her mind, Kuhn said.

Ghimirey graduated high school in only 3 years as valedictorian with a 4.0 GPA, and received a standing ovation for her commencement speech. With her family unable to afford the cost of college, she began to pursue scholarships and spent many weekends at the Kuhns’ house, preparing her applications. She now lives at the Kuhns’ home in Kent when school is in session.

“She has a desk in our basement family room, and she is what you might call chained to it,” he said. “She’s in some ways the classic over-achiever — not because she’s not smart, she is — but because she earns everything she achieves through such hard work and dedication.”

During her sophomore year, Ghimirey began working in the lab of Dr. Gail Fraizer, Associate Professor of Biological and Biomedical Sciences, studying molecular and cellular biology.

When leukemia cells spread to hypoxic environments like the bone marrow, they ramp up VEGF production. Ghimirey focused on two of the gene’s alternative protein products that recruit more blood cells to keep the leukemia cells alive and thriving. She said the 165 subtype is the most highly-expressed and the most valuable to leukemia cells’ ability to make adjustments, making silencing it a good target for researchers. 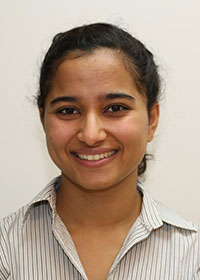 In 2014, she secured an internship at the H. Lee Moffitt Cancer Center & Research Institute in Tampa, Florida — closely affiliated with the M.D. Anderson Cancer Center at the University of Texas, the topranked institute in the nation.

“She prepared and presented her research findings on melanoma for students and staff at MCRC. Over the summer she accomplished more than some graduate students do in a year,” Fraizer said. “On her return to KSU, she gave a presentation on her work, and I was very impressed with the high level of understanding she displayed.”

Fraizer and Moffitt scientists weren’t the only ones impressed. Even before beginning her SURE internship, Ghimirey spent a few days in Memphis, Tennessee, presenting her work to St. Jude Children’s Research Hospital.

“They wanted to recruit her to attend grad school there,” Fraizer said. “We’re fortunate that she chose Kent State.”

Naturally, her own institution has recognized Ghimirey as well. In 2016, she was among 12 female students to receive the Kent State University Women’s Center’s Sage Project Award for overcoming barriers and finding balance in following their path and making their mark at KSU.

In June 2016, Ghimirey enrolled in the Summer Undergraduate Research Experience — an eight-week program that gave 35 students fellowships to conduct research in the labs of Kent State faculty mentors.

Her SURE fellowship provided a stipend that gave her the freedom to stay in the lab, where she continued her work with Fraizer.

“Because of the SURE internship, I was able to complete my research in time to submit my honors thesis for graduation,” she said. She graduated in December 2016 with a 3.98 GPA, all while serving other students as a biology and chemistry tutor.

In September 2016, Ghimirey presented her work again, this time in Chicago at the American Society of Hematology’s Meeting on Hematologic Malignancies.

“Given her presentation skills, they were genuinely surprised that she did not yet have her bachelor’s degree,” Fraizer said. “Kent State’s reputation is enhanced when students of her caliber are able to present their work at meetings of internationally-respected societies such as the ASH.”

As a graduate student, Ghimirey has joined the laboratory of Associate Professor of Biological and Biomedical Sciences, Dr. Gary Koski, where her focus has transitioned from leukemia to breast cancer.

Koski was a member of Ghimirey’s honors thesis committee, and was impressed by the research she’s already done, as well as her performance in the two courses he teaches — Immunology and Principles of Infectious Disease.

Koski already has collaborative research relationships with scientists at Moffitt, where Ghimirey interned. These include Dr. Brian Czerniecki who has worked closely with Koski since their days at the National Cancer Institute and the University of Pennsylvania, where they co-developed technology for a breast cancer vaccine. The breast cancer vaccine has shown extraordinary promise in trials with early-stage patients.

“We want to push the envelope now, and try to replicate those results in laterstage patients,” he said. “We’d like to identify targeted drugs that will attack the biochemical pathways and work synergistically with the immune system to deliver a one-two punch to cancer cells. That’s what Nirmala is working on.”

Ghimirey now screens low-toxicity drugs in a test-tube assay to identify which ones might work best in tandem with the vaccine.

“I’m almost done with my project, which is looking at how TH-1 cytokines, factors produced by T cells of the immune system, can work together with drugs,” she said.

Ghimirey said the drugs should inhibit a step for growth and proliferation of cancer cells.

“We inject into the lymph nodes other immune system cells called dendritic cells that teach the T cells to recognize and attack cancer,” she said. “We hope this vaccination technique, when coupled with the targeted drugs, will kill cancer cells more effectively.”

Her academic journey is far from over. Ghimirey is considering Ph.D. studies as well as an M.D. She recently completed her MCAT exams and hopes to balance a career as an osteopathic doctor and a researcher.

Ghimirey said she feels a sense of gratitude for all she’s accomplished already, and the opportunities that lay ahead.

“The United States opened doors for me. There are more opportunities here, and because you’ve been on the other side, you appreciate it more,” she said. “And it’s not just being in the U.S.; I’m so glad that I came to Kent State, because everyone is so nice and helpful.”

Ghimirey said she wouldn’t be where she had she not taken advantage of undergraduate research, and encourages other students to engage in research with a faculty member.

“It’s okay for them to not know, but they should do it and just see if they like it.”

Back to Student Research Articles   View the Spring 2018 Research Magazine