Stopping Alzheimer's Before It Starts

For decades, biologists researching a cure for Alzheimer’s disease have remained in the dark almost as much as the those who suffer from the disease.

For the past several years, Dr. Gemma Casadesus Smith, an Associate Professor of Biological Sciences, has been launching a multi-pronged attack against Alzheimer’s.

There are two types of Alzheimer’s: agerelated and genetic. Casadesus Smith focuses on age-related Alzheimer’s and the hormones she believes are directly tied to its onset.

“In my lab, we’re trying to understand how age-related events can cause Alzheimer’s disease,” she said. “My work is less focused on treating existing illness, and more in delaying or preventing it. Most Alzheimer’s patients, by the time they show symptoms, probably have had it for 10 or 15 years already. The small changes the disease causes start earlier than we can detect.”

Her hope is to understand how hormones associated with increased risk of Alzheimer’s disease work so that she can alter hormone activity to delay the disease long enough to preserve quality of life. “If we can delay it by five years, ‘we can effectively cure 50 percent of cases,’ she said. If we delay it enough, people will be able to reach the end of their life with full cognitive capabilities.”

Casadesus Smith said Alzheimer’s is likely more of a syndrome than a disease, caused by a battery of different negative events, but with a collective overall result — neuronal death, development of pathology, and consequent loss of cognitive function.

Funded since the early 2000s by the Alzheimer’s Association and NIH, Casadesus Smith has been studying the “syndrome” through many lenses.

“In my lab, we’re trying to understand how age-related events can cause Alzheimer’s disease. My work is not in treating existing illness, but in preventing it. Most patients, by the time they show symptoms, have had it for 10 or 15 years already. The small changes the disease causes start earlier than we can detect.” – Gemma Casadesus Smith

One side of her work studies how the brain processes glucose. The theory is that the alterations in normal insulin signaling in the brain and subsequent reductions in proper glucose usage are predictors of Alzheimer’s, which is prevalent among obese people and diabetics.

“In the last 10 years, many researchers have started viewing Alzheimer’s as type-3 diabetes,” she said. Two particular metabolic hormones — leptin and amylin — activate the insulin function systems that help the brain use insulin efficiently to process glucose. Both hormones also have been shown to directly affect cognition.

Casadesus Smith’s research uses mouse models of Alzheimer’s disease in which the hormones are administered either directly to the hippocampus or systemically, to determine how they affect insulin usage and cellular energy production, and what effect they have on cognition and Alzheimer’s disease pathology. 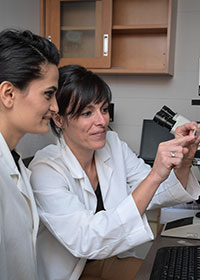 One of the hypothesized causes of Alzheimer’s is a malfunction in the body’s use of the hormone amylin. In diabetic patients, amylin tends to bind to itself and form plaques in the pancreas, but when amylin plaques form, the body no longer receives the benefits of the hormone. Interestingly, amyloid-beta, one of the main proteins that malfunctions in Alzheimer’s disease, goes through similar changes in the brain.

In April 2016, Casadesus Smith received a three-year $444,000 grant from The National Institutes of Health’s National Institute on Aging to assess the potential benefits of Pramlintide, a synthetic form of amylin. She and others have shown that this non-aggregating form of amylin leads to cognitive improvements and reductions in AD pathology. Amylin in its native state is important in maximizing insulin function and in conjunction with other diabetes treatments is proving an effective treatment for diabetic patients.

“We know this drug works, but what we don’t know is how it works, and that’s what this grant will allow us to study,” she says. Understanding how drugs work is critical to be able to develop new therapies.

Casadesus Smith said her lab’s metabolic-based studies are now moving toward a focus on the hormones’ abilities to regulate mitochondrial function.

“Mitochondria are the energy powerhouses in cells and particularly important in neurons, as the brain is the most demanding organ in our body in terms of the energy it requires to function,” she said. “We are also interested in discovering the basic function of these hormone receptors in the brain, like what happens if we do not have these receptors in cognition related areas.”

The other half of her recent work focuses on the gender differences in Alzheimer’s disease and the hormonal changes that aging women undergo.

Statistics show that women are 1.5 times more like to develop Alzheimer’s disease than are men. Some scientists believe this is because when women reach menopause, their bodies cease to produce estrogen. However, Casadesus Smith believes that its more than just estrogen loss, and that hormones involved in trying to jump start the ovaries — luteinizing hormone (LH) — are also involved in cognitive loss and increased risk of Alzheimer’s development. Menopausal women often undergo hormone replacement therapy to reduce or eliminate the stressful effects of menopause. However, at advanced ages, estrogen no longer benefits the body and will damage neurons, raising the risk of dementia and Alzheimer’s, as well as increasing the risks of stroke, breast cancer, and cardiovascular disease.

Rising levels of luteinizing hormone have the same damaging effects as estrogen on neuron plasticity — a key factor in cognitive health. Casadesus Smith said that’s because when LH increases in the bloodstream, it decreases in the brain, causing loss of cognitive function and defects in neuronal health and plasticity.

By normalizing high menopausal levels of LH to pre-menopausal levels, Casadesus Smith said women may be able to enjoy reduced severity of neuronal menopause symptoms and sustained cognitive function without the dangerous side effects of estrogen replacement treatments.

Her award was the largest of any KSU researcher in 2017.

Casadesus Smith said the grant will fund the use of CRISPR-cas9 — a cutting-edge gene-editing technology — to recode DNA to eliminate LH receptors.

“So we’re going to ask two questions,” she said. “One, what is the role of the LH receptor in normal memory function? And two, how do the LH protein and receptor influence the Alzheimer’s phenotype? What do they do to pathology, and aspects associated with neuronal death in Alzheimer’s disease?”

By removing both the LH protein and the LH receptors in both normal mice and mice with Alzheimer’s phenotypes, she hopes to show that LH is an important contributor to neuronal plasticity, learning, memory, and that loss in the brain is, at least partially, responsible for Alzheimer’s-related cognitive impairment.

Back to Brain Health Articles   View the Spring 2018 Research Magazine