Growing up in Canada and the United States and studying in Turkey and Russia gave Kent State University alumnus Andrew Rand a passion for all things international. Rand decided to follow his passion and since graduating from the Kent State University College of Business Administration’s MBA program in 1993, he has done business in more than 100 countries on six continents.

“Working and traveling overseas brings with it a fresh perspective. Different cultures tackle problems differently. When you put different points of view together, the results are almost always better,” Rand said. “Learning to understand how different cultures view each other, how they deal with challenges, and their general outlook on things, will make you a more effective international business person.”

Rand, who is currently transitioning to a new job, lives in Frankfurt, Germany. He said he took a job on Wall Street and jumped at the chance to transfer to the company’s headquarters in Germany. Frankfurt is home to more than 200 banks and home to the European Central Bank.

“The quality of life in Germany is great,” Rand said. “It is a country that loves being outside, so I find myself doing more exercise than I did in the US. There are festivals nearby just about every weekend throughout the year. Frankfurt has proven to be a great choice.”

While working abroad, Rand said he has learned that experiences help a person cope with future challenges. He said he had the opportunity to learn a new language and culture, which has helped him to better understand and respect the differences of others.

“I have learned that to most problems there is more than one solution, and I have learned to be more tolerant and patient,” Rand said. “All of these pearls of wisdom I have picked up along my journey will continue to benefit me. It is these little things that make the journey worth taking.” 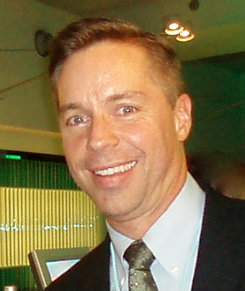 Rand suggests that students interested in studying or working abroad should learn about a country’s history and learn a foreign language. Throughout the years, Rand studied several languages and currently speaks Spanish and Russian and is currently learning German.

“Language is the key to understanding culture,” Rand said. “Because the English language has become so ubiquitous in international business, the average American doesn't need to know more than English, but this leads to US/Anglo ethnocentrism, which to non-Anglophones is not attractive.”

He also said students should try to work in diverse groups for projects. From his own experiences in Kent State University’s MBA program, Rand learned group diversity could yield good results. Rand said the need for students to have more experience working with diverse populations is due to the continuous evolution of technology.

“Today's students must become nimble and learn to adapt and go into ventures with an open mind. They must learn to work with different generations, different cultures, in different languages and in different time zones,” Rand said. “Learning is a life-long endeavor. It doesn't stop when we leave school.”