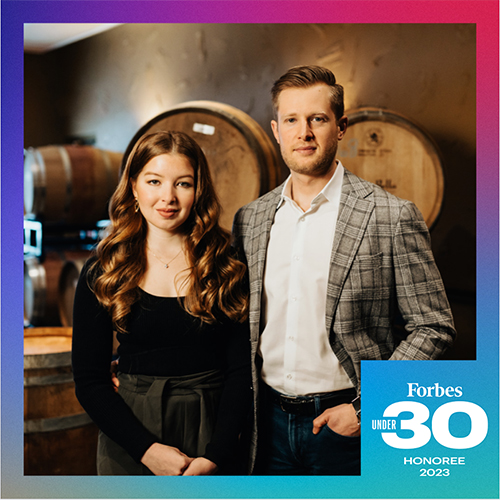 Kent State entrepreneurship graduate Evan Schumann ’17 and his wife Marisa Sergi were recently recognized in the Food & Drink category of Forbes’ 30 Under 30 list. Schumann is co-owner of L’uva Bella Winery with Sergi, whose family has been in the wine business for over 15 years.

Following graduation from Kent State, Schumann started a company in the chemical industry. He then began working in consulting and mergers and acquisitions. In 2020, he and Sergi acquired L’uva Bella. The company currently distributes in nine states across the Midwest and East Coast and will launch in a 10th state in the near future.

“We both saw the opportunity to take the company into a much larger market and we acquired it with the intention of growing the brand into the national market,” Schumann said. “To be able to carve out success on a growing scale is really special to us and it proves that you identify a niche in any market, develop a customer base and replicate that in a base that’s not always in the headlines.”

Schumann said the couple is honored to be included in the Forbes’ 30 Under 30 list.

“The recognition is an honor for our entire team and it shows that we are continually trying to reinvest to build the business even larger,” he said. “This is still just a starting point for us – we still have so much to do.”

Schumann said the professors he had at Kent State were instrumental in preparing him for a future as an entrepreneur.

“They identified that I was interested in doing something big with my career and that I had a lot of ideas and was ready to get out there and build a successful company,” he said. “The professors at Kent gave me the flexibility to do that – they encouraged me to get out of the classroom and talk to customers.”

Read more about L’uva Bella and the Forbes listing here.