They remember the sights and sounds of helicopters and trucks as the Ohio National Guard moved into their small college town. They remember the smell of tear gas. They remember the chants of the protesters against the Vietnam War and invasion of Cambodia. They remember the panic and fear that ensued immediately after they heard that four students were killed and nine wounded when the guardsmen opened fire on campus. On May 4, 1970, many people in Kent experienced a traumatic event that they will never forget.

These tragic events not only became a watershed moment for our country but left a university in shambles, a small town divided, and forever changed many lives. After the shootings, some community members said the students deserved to be shot and the division and resentments continue to this day.

Recently, a small group of researchers, in Kent State’s College of Arts and Sciences, have curated short (120-200 second), sometimes very poignant, audio clips of those oral accounts and paired them with a specific geographic location on an interactive online map of the city of Kent from April 1970. To access the website, visit: https://mappingmay4.kent.edu/.

Kent State’s Dr. Jennifer Mapes, associate professor of geography, and Dr. Sara Koopman, assistant professor in the School of Peace & Conflict Studies, were recently awarded a $20,000 grant from Ohio Humanities to continue a collaboration with Kent State Special Collections & Archives and complete the second part of their “Mapping May 4” project. 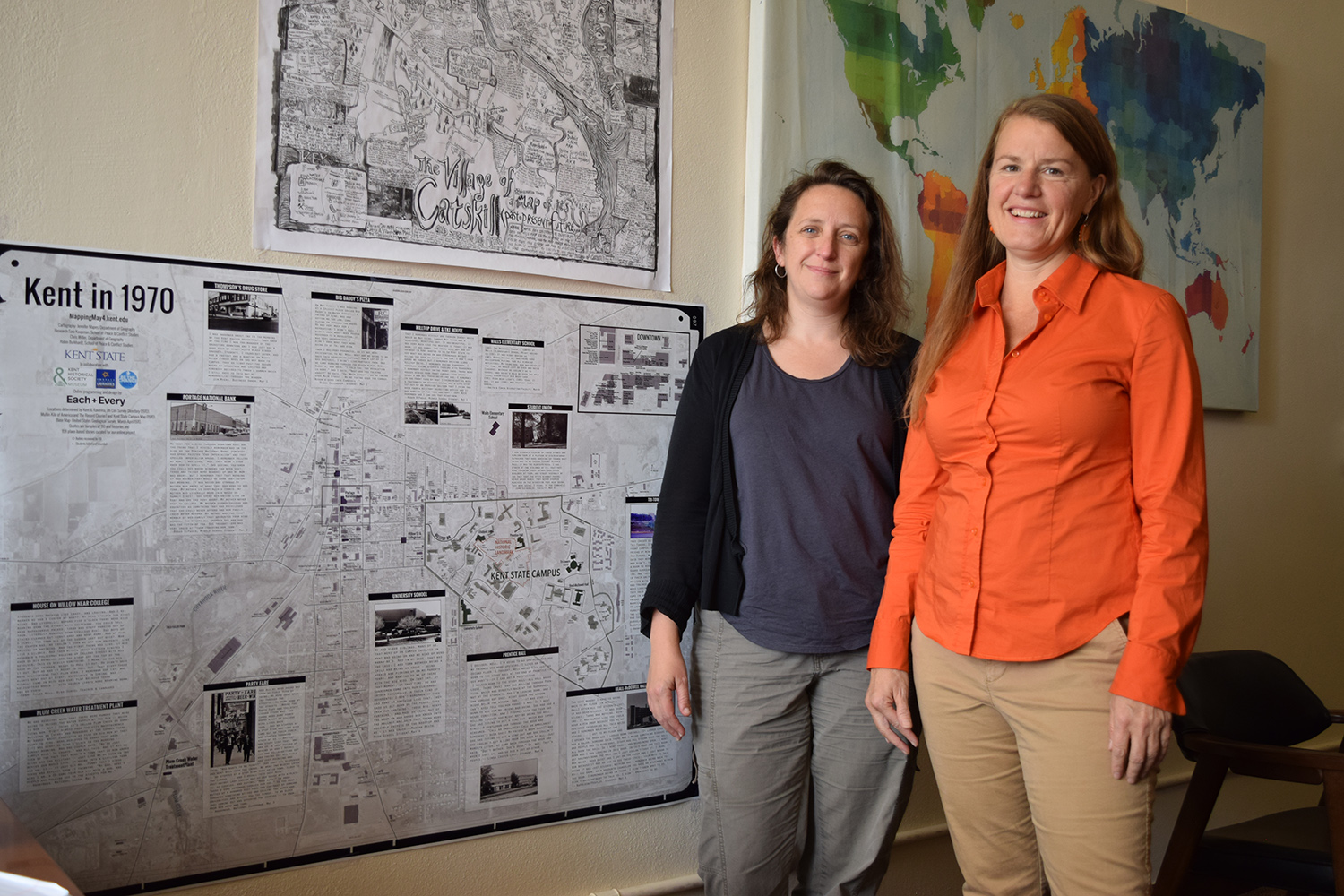 “It started by thinking about the map and technical side of things, then Sara arrived and we started talking about planning, peace-building and reconciliation, which is her area of expertise,” Mapes said. “I’m interested in community planning and working with communities, so together that is a perfect combination for this project.”

The web app they created and continue to update provides a space for dialogue and gives the public an opportunity to connect some of the people, places and specific events of April 30-May 5, 1970, in Kent. Specifically, it focuses on the oral accounts that mention places, such as dormitories, nearby schools, local restaurants, and bars and shops all over the city of Kent to show a wide variety of perspectives but does not yet include stories within the National Historic Landmark.

“Making it a cross-campus, town-gown, campus and city connection is really important,” Mapes said. “I think one of the things that really comes across with this project is just how you don’t necessarily have to have known those students or have been there when the shooting happened, but you still feel it really deeply.”

So far, 168 audio clips from 97 different locations, including students, faculty, Ohio National Guardsmen and local shop owners are featured on this site and are searchable, and the researchers plan to include many more as the project evolves. Users of the website can toggle between the 1970 map and a current map. Some locations on the map also feature photos from the 1970s depicting the various locations mentioned in the oral history accounts. Kent State students Chris Willer, Robin Burkhardt and Evelyn Wogoman worked on the project, doing background research and collecting photos for the various locations.

The grant will fund a location-aware mobile app, designed by project partners Each + Every (a Kent design firm) with a curated tour of sites on campus and downtown. It will also allow for the creation of wall-sized, map-based exhibits that will be located in the May 4 Visitors Center and the Kent Historical Society Museum (both collaborative partners on this project), facilitated dialogue walking tours in April and May 2020, and the addition of new stories to the online map.

“A big step in reconciliation after a harm is to acknowledge the truth of what happened and increase understanding of what exactly did happen,” Koopman said. “In an era where people are less likely to slow down and take an hour and a half to listen to a full oral history, this app makes the stories much more accessible. When we are used to short little tweets we’ll listen to a 90-second clip.”

“We’re hoping it will live on and be available online for K-12 students and also be used here on campus for teaching,” Mapes added.

The authors of the website state that the web app aims to open a space for dialogue in the hope of building understanding, connection across difference and ultimately reconciliation.

“There are still a lot of divisions,” Koopman said. “I think people are much less likely to read a story from someone they disagree with. So, if they are someone who thinks that ‘it was the students’ fault,’ they are less likely to read a student’s story. But, if they feel connected to a particular place, then they are more likely to read a short story about that place. So, our hope is that, connecting through place, people might be able to connect across difference. It’s also an attempt to open another space or another way for dialogue to help build reconciliation and broader understanding.”

The primary way people can get involved will be to go to the website and upload their own versions of what happened or stories they’ve heard about various locations around town and on campus and submit comments on the posted clips. Those involved in the project also plan to host in-person facilitated dialogue walking tours and workshops using this app in spring 2020.

At the launch of the web app in October, Mapes and Koopman played a few of the audio clips they saw as representative of the experiences shared on the site.