"The value of an education in a liberal arts college is not the learning of many facts but the training of the mind to think something that cannot be learned from textbooks."

The College of Arts and Sciences has long been the heart of Kent State University, delivering a first-rate education dedicated to the traditions and values of the liberal arts. These traditions include developing the skills of critical reasoning, writing, reading and deduction and providing a firm grounding in the theories and methodologies of the humanities, social sciences, and natural sciences and mathematics. These values include a commitment to rigorous questioning of principles and practices, intellectual integrity, community responsibility, and diversity of perspectives in the pursuit of truth and social justice.

However, many people today are skeptical about a liberal arts education. They wonder if the liberal arts are relevant in the workplace. Is it worth the cost, especially with rising college prices and increasing levels of student debt?

We believe that a liberal arts education has never been more relevant in terms of preparing young people for work and life. In order to find new solutions to the world’s complex problems we need energetic, open-minded, and ethical leaders who can see new opportunities and collaborate with others. Learning from history, the one thing we know for certain is that things change, and those who can adapt to changes quickly, think critically, and communicate effectively will thrive.

It is shortsighted to think that colleges should produce graduates focused exclusively in STEM (science, technology, engineering and math) or other trade-specific fields. It boils down to the difference between education and training for a particular line of work. While we certainly want our graduates to get jobs that lead to fulfilling careers, we also want them to be well-rounded, creative, adaptable, and filled with meaning and purpose. A college education should be just as much about learning how to think and approach complex problems as it is about developing
transferrable skills. After all, the jobs of today will not necessarily be those of tomorrow.

Of course, not everyone can, nor wants to be a CEO, but the fact is that these U.S. businessmen and businesswomen didn’t major in business, but instead majored in everything from atmospheric physics to French literature. Many cite their study of history, literature, science, and philosophy as being very important in their development of interpersonal skills and critical thinking abilities. Most say they still apply the knowledge learned in pursuing those degrees in making day-to-day business decisions. Others say the degrees helped launch their careers where economics, finance or business may have not.

According to a report by the Association of American Colleges and Universities (AAC&U), by their mid-50s, liberal arts majors with an advanced or undergraduate degree are on average making more money than those who studied in professional and pre-professional fields, and are employed at similar rates.

The AAC&U released the results of a survey conducted in January 2013 of 318 corporate leaders, 93 percent of whom agreed that “a demonstrated capacity to think critically, communicate clearly, and solve complex problems” is more important than a job candidate’s undergraduate major.

According to a study from Nobel laureate Thomas R. Cech, former president of Howard Hughes Medical Institute and a distinguished chemistry and biochemistry professor at the University of Colorado Boulder, even though only 3 percent of college graduates received their education at liberal arts colleges, roughly 20 percent of scientists elected into the National Academy of Sciences in a recent two-year span come from liberal arts institutions.

A liberal arts education often presents students with contradictory opinions from different viewpoints, forcing an in-depth examination and critical distillation of data. But what skill is more important for scientists and engineers? Cech says "scientists need the same skills as humanists to cut through misleading observations and arrive at a defensible interpretation."

Fundamental to a liberal education is the acquisition, preservation, and transmission of new ideas and knowledge. Study within the College of Arts and Sciences broadens and enriches a student’s intellectual and cultural background. The College provides a core curriculum for all students whatever their major fields or career goals. With specialized and interdisciplinary programs at the undergraduate and graduate levels, the College strives to offer a wide variety of learning and research opportunities to its students guided by nationally and internationally renowned faculty--faculty as passionate and intent on adding to human understanding as they are to passing this understanding on to future generations.

We believe that, in today’s global society, a liberal education that teaches broad transferable skills is as important as ever for our citizens. Beyond the economic impact, a liberal education prepares students to be good citizens of tomorrow’s democracy. They’ll be better able to evaluate political rhetoric, moral and ethical questions arising from new political developments, environmental changes, and discoveries in science and medicine. It also introduces them to multiple cultural perspectives, perspectives necessary for successful global citizenship.

No matter what major a student chooses, the first year of each student’s academic career is spent mostly in courses from the College of Arts and Sciences learning basic writing, quantitative, and critical thinking skills. The College also provides the vast majority of diversity courses, many times giving students their first exposure to cultures other than their own.

The tradition of the liberal arts and sciences at Kent State extends beyond the undergraduate program to the graduate program. The Master’s program in Liberal Studies, housed in Arts & Sciences, encourages students to continue, or return to, studies that integrate several disciplines. They find their own unifying theme for their individual programs, follow their intellectual curiosity beyond the boundaries of specialization, and recharge their imaginations with the energy of a great tradition.

As we continue our mission of delivering a liberal arts education, the College remains dedicated to the pursuit of human excellence. As a College, we take our role as the backbone of this university very seriously. The College of Arts and Sciences may be old-fashioned in continuing to hold fast to traditional values, but the liberal education it provides is as important to the students in the professional programs as it is to the students in our own college.

Talk with Faculty, Family and Professionals

Talk with Faculty, Family and Professionals 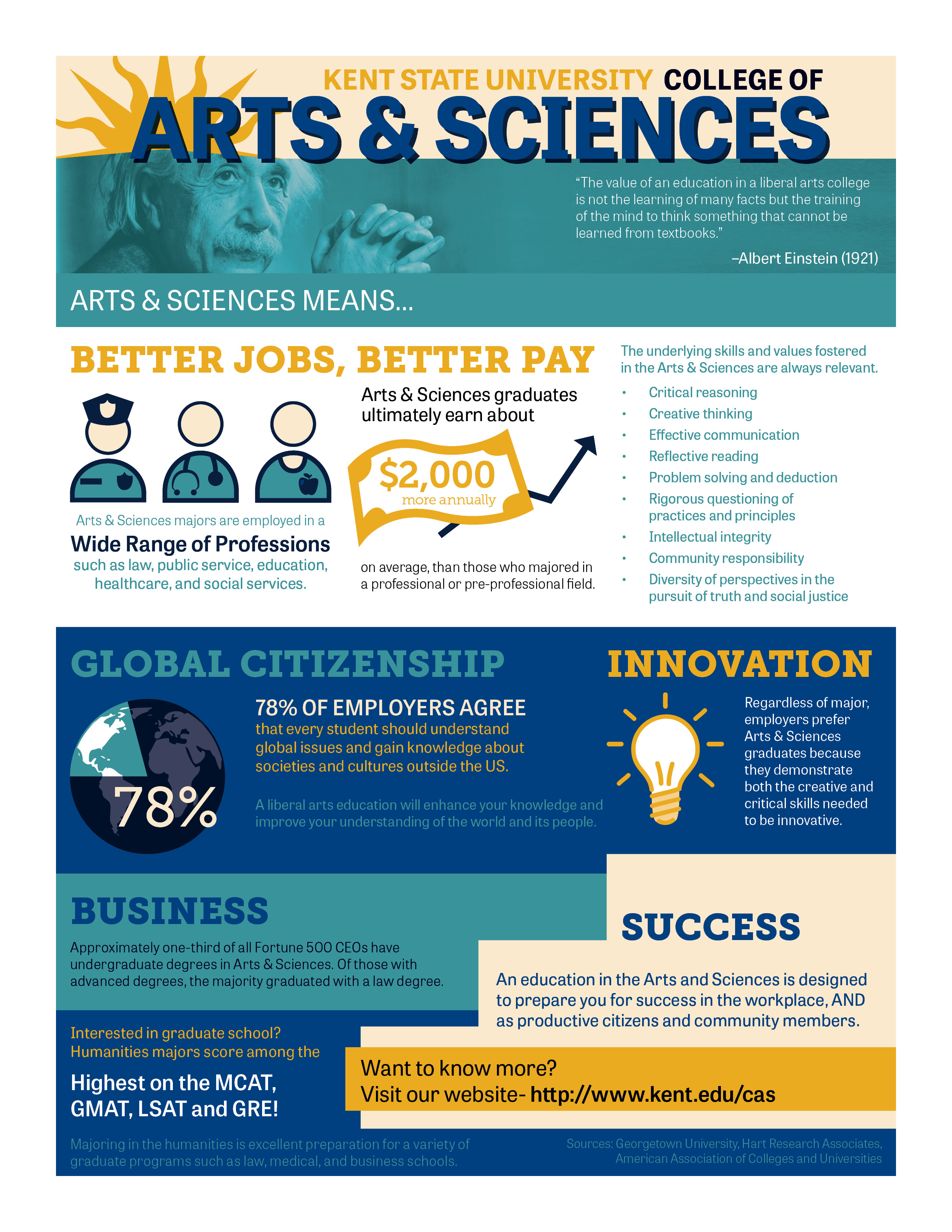