Award-Winning Poets Root and Uschuk to Read on March 20 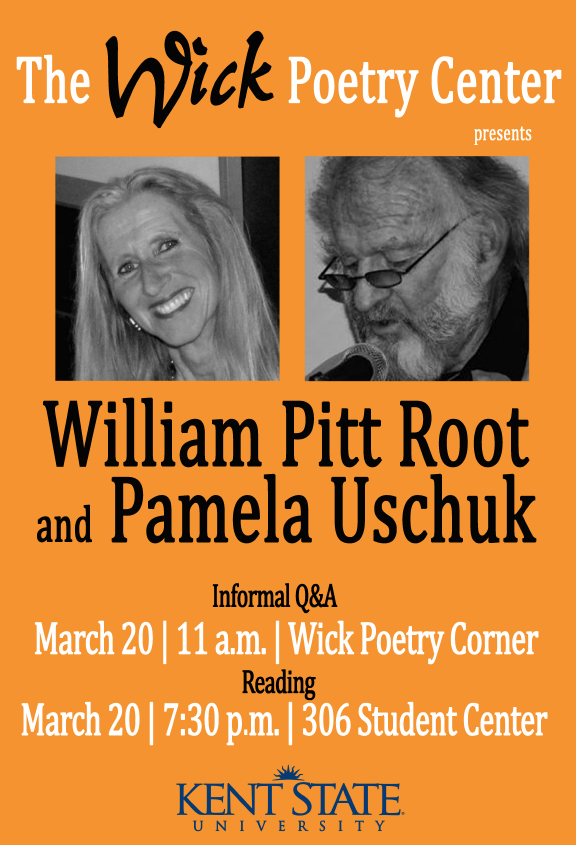 The Wick Poetry Center will host award-winning poets William Pitt Root and Pamela Uschuk as part of its annual reading series on March 20 at 7:30 p.m. in Room 306 ABC at the Kent Student Center. The poets will also answer questions during a Q&A that same day at 11 a.m. in the Wick Poetry Corner. Both events are free and open to the public.

“Both William Pitt Root and Pam Uschuk are acclaimed American poets, and we're thrilled that they have agreed to read at Kent State and speak to students,” says Jessica Jewell, program coordinator for the Wick Poetry Center.

Root is a prize-winning poet whose work appears in 300 journals, such as The New Yorker and The Atlantic. He has received grants from several different foundations, including the Rockefeller and Guggenheim foundations. Root currently resides in southwest Colorado and has worked in academia, a shipyard, factories and an underground copper mine.

Uschuk is a poet and author of six books. Her collections of poems, titled CRAZY LOVE, won the American Book Award in 2010. Uschuk has works featured in different journals and anthologies that have been translated into a dozen different languages. She has also won several other awards, including the War Poetry Prize and the Dorothy Daniels Writing Award from the National League of American PEN Women. Uschuk is currently the editor-in-chief of Cutthroat, a literary magazine featuring poetry and short fictions.

The reading series is an annual event that hosts emerging and established writers to provide readings, lectures and workshops. The series showcases any writers and poets, from award winners to young children.