Congratulations to the recipients of the 2015 Student Leadership and Distinguished Teacher and Advisor Awards, which is sponsored annually by the College of Arts and Sciences. The student award recipients, who are nominated by their departments, have shown leadership in academics, university service, community service, and other special programs.

The award recipients were honored at a dinner and ceremony on April 23 in the Kent Student Center.

Joseph Struckel, a Kent State University alumnus, gave the keynote address. He received his B.S. in Geology from Kent State in 1969 and had a distinguished career in the U.S. Army Corps of Engineers and Lawrence Laboratory before starting his own company--Geosearch Logging, in Edmond, OK. In 2012 he sold the company to Empirica LLC and currently serves as a consultant.  He was joined by his wife, Karen, who is also a Kent State University alumna with a B.A. in English and History. 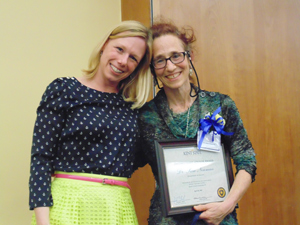 The 2015 Distinguished Advisor Award was presented to Sara Newman, Ph.D., a professor in the Department of English.  She has published on Rhetoric and Rhetoric of Medicine and Disability and written two books: Aristotle and Style and Writing Disability: A Critical History. She has degrees in English (B.A.), History of Art (M.A.), and Rhetoric (Ph.D.).

Vera Camden, Ph.D., a professor in the Department of English since 1984, was presented the 2015 Distinguished Teacher Award. Camden also serves as a Clinical Assistant Professor of Psychiatry at Case Western Reserve University and Clinical Faculty of Social Work at Rutgers University. She is Training and Supervising Analyst at the Cleveland Psychoanalytic Center. She specializes in seventeenth-century British literature, psychoanalysis and literature, trauma studies, and children and young adult literature, and comics and graphic narratives. 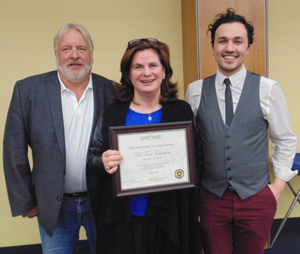