Kent State University Professor of Anthropology Richard Feinberg, Ph.D., joined a team from the Sedna Foundation, a Canadian nongovernmental organization, to work on a documentary that was shot in the Solomon Islands this past summer as part of a three-year international research project titled “1,000 Days for the Planet.”

Sedna Foundation is collaborating with the United Nations Secretariat for the Convention on Biodiversity and the provincial government of Quebec on the project that will explore and document the beauty of planet earth, the way the ecosystems function and conservation challenges.

Feinberg traveled with the team to Anuta, a small, remote Polynesian island in the Solomon Islands, where he had previously lived for about a year, from 1972-1973, working on his doctoral dissertation.  Feinberg had returned for short visits to Anuta in 1983, 2000 and 2007, and was invited to join the documentary crew to help facilitate arrangements at Anuta. 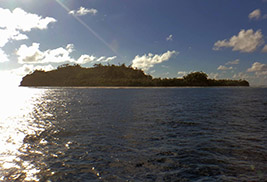 “Anuta is among the least accessible spots on the planet,” Feinberg says. “Ships rarely call more than once a month, and on occasion, a full year goes by without a visit. Anutans agreed that I should take part in the expedition, and the opportunity to see my friends on such short notice was irresistible.”

Solomon Islands
Solomon Islands, photo courtesy of Sofiane Belaid
Feinberg and the team from Canada, Argentina, Algeria, Belgium and France arrived at Anuta after four days at sea on the Sedna IV, a 150-foot-long, three-masted schooner that is powered by a diesel engine.

“It felt strange to have no islanders aboard and to make the trip in relative comfort,” Feinberg says. “I’m accustomed to sleeping on the deck of a cargo ship, my body wedged among scores of fellow travelers, and subsisting on a diet of hard tack, tinned tuna and occasionally a local pudding. Sedna IV offered comfortable cabins, a full-time cook and Wi-Fi!”

“The first change to catch my attention was the fact that many women are wearing shoulder-length hair. Even in the early 2000s, women’s hair was short, and married women shaved their heads,” he says. “I found several houses with sheets of corrugated iron covering doors or other critical areas. Perhaps half the houses are built as much as a yard above the ground. When I first visited, every building rested on the sand. And, strikingly, the kerosene lanterns that provided nearly all the lighting on my early visits have been entirely replaced by solar panels and fluorescent bulbs, thanks to a provincial initiative funded by foreign donors. Solar power also means a few radios and CD players.”

In 1972, as a young doctoral candidate conducting research at Anuta, Feinberg lived with Pu Tokerau, the younger brother of Anuta’s senior chief. On this recent trip, he lodged at the chief’s house and was happy to reconnect with people with whom he had built long-lasting friendships.

“I was struck by how few of the people I knew in 1972 are still alive; only about a half dozen of my generation and up,” he says. “I was overwhelmed with all the marriages, births, deaths and name changes since my last sustained visit, making it hard to keep track of who was who.”

Feinberg says that a visit to Anuta does not mean stepping back in time, something he says is obvious to anthropologists, but was a surprise to the research team.

“Anutans are not living fossils or quaint museum specimens; rather they are very much a part of the 21st century’s globally interconnected economic and political system,” Feinberg says. “Young people attend high school in several locations around the Solomon Islands, and a few have university degrees. Engagement with the market economy has also led to suspicion and accusations of malfeasance.”

Feinberg described the three-week expedition as a success, with the Anutans acting as great hosts and the expedition team accomplishing its mission, while bonding quickly with the islanders and showing enthusiasm at consuming Anutan food.

“The Anutans have become unusually adept at entertaining guests,” he says. “They were wonderful hosts, tolerating the disruption to their lives with patience and their unique sense of humor. In the end, everyone from the ship got to spend time on the island, and most declared the visit a high point of their lives.”