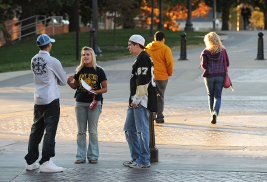 The average college student heading to classes this fall probably can’t tell you much about the game of backgammon or name the comic character who gets energy from spinach. While that might not be too surprising, many of the changes in U.S. knowledge over the last three decades show a significant generational shift, according to a Kent State University study.

“Like many other researchers interested in students’ knowledge, we have been using a set of norms that were developed in 1980 that gave researchers a sense of how much knowledge college students had about an array of Trivial Pursuit-style questions,” Dunlosky says.

The 1980 norms, developed by researchers Thomas Nelson and Louis Narens, have been valuable to researchers in many fields. However, much has changed over the 32 years since the publication of the Nelson and Narans study. When Dunlosky and Rawson examined the 1980 norms, they quickly realized they were woefully out of date.

“A lot of students these days, believe it or not, don’t know who Popeye is,” Dunlosky says, laughing. “Even though as little as 30 years ago, most students did.”

The Kent State team decided to update the norms to assist other researchers. Working with colleagues at Colorado State University, they surveyed 671 college students, asking 300 questions on subjects from art to geography to pop culture. The team began the research three years ago, and it continued through 2012.

“We started this research as a service to the field,” Dunlosky explains. “We didn’t realize how much things would shift.”

Only about three or four of the most difficult questions from the 1980 norms were considered impossible to answer. Today, students don’t know the answers to about 25 percent of these questions, according to their study.

Some of the difficult questions were not that surprising. One 1980 question that flummoxed today’s students was “What game do you use a doubling cube in?”

“As it turns out, backgammon just isn’t that popular with college students nowadays,” Dunlosky says.

Some other interesting findings: Knowledge of hockey has increased, and migraines are much better-known now, but fewer participants knew that Paris is the capital of France or that Hook is the name of the villainous captain in the Peter Pan story. Seven percent of respondents indicated that the layer of fat on whales is called “flubber,” and 12 percent thought Mount Everest was in the Appalachians.

Dunlosky admits that it is fun to consider the generational knowledge shift, and to examine the many facts that kids know today that very few would have known 30 years ago, but he hopes the study serves a larger purpose.

“We hope these updated norms will be valuable to researchers in a number of fields,” Dunlosky says.