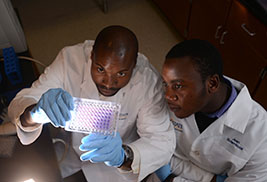 Buruli Ulcer is a skin ailment caused by a bacterium called Mycobacterium ulcerans that affects the skin and sometimes bone. Buruli Ulcer has been reported in more than 30 countries, including many African countries.

Engohang-Ndong and Mutambuze have been researching new drugs that could work against the bacterium.

“We have been testing new drugs and new combinations of drugs to eventually open new avenues to improve the treatment of Buruli Ulcer,” Engohang-Ndong says. “We want to come up with more alternatives than are available right now.”

Mutambuze says Sutezolid (PNU-100480) and BTZ043 are anti-tuberculosis drugs currently in the pipeline. However, they have found that the two drugs are more effective than streptomycin, a current recommended antibiotic by the World Health Organization for treating Buruli Ulcer.

“We have also shown that these two new antibiotics, in combination, seem to be more effective at inhibiting Mycobacaterium ulcerans growth when used in combination,” Mutambuze says. “What this means is that we may have found a new alternative and more effective ways to manage Buruli Ulcer, which is promising news for many people around the world suffering from this devastating disease.”

Engohang-Ndong was already researching the disease when he met Mutambuze in 2011. Mutambuze liked the project and decided to make it part of his honors thesis due at the end of this semester.

“I never really thought about research until I attended the Aspiring Physicians and Research Scientists Conference at the Cleveland Clinic during my freshman year of college,” Mutambuze says. “Students my age were doing really complex and interesting projects, and those students really inspired me to get involved in research.”

Mutambuze says he decided to participate in Kent State’s Undergraduate Research Symposium because he wanted to hone in on what research field he wants to dedicate his future career to.

The Undergraduate Research Symposium is on April 2 from 1 - 5 p.m. and is sponsored by the Office of the Provost, Honors College, Division of Research and Sponsored Programs, Undergraduate Studies and University Libraries. The symposium celebrates research and scholarship across all disciplines, and is an opportunity for undergraduate students to gain experience presenting their work in an academic setting and for networking with faculty members.

Students from other universities and undergraduate students from Kent State also are encouraged to participate. Monetary awards will be given out for winning presentations.

Mutambuze says he enjoys working with people and has a passion for science and medicine. When he graduates in May, he wants to attend medical school to pursue a combined M.D.-Ph.D. or M.D. at an institution with a rich research curriculum.

“This project is one of passion to me because the thought of my work being able to help people around the world is one that I take pride in,” Mutambuze says. “I believe I can make a positive impact in many people’s lives around the world through science and medicine.”