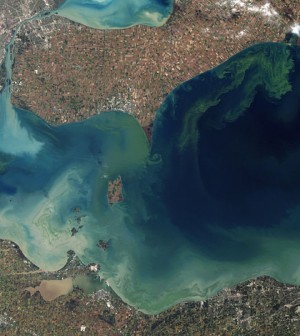 Image: Algal blooms in Lake Erie’s Western Basin in 2011 (Credit: NASA, via Wikimedia Commons)Satellite instruments are playing an increasingly important role in keeping tabs on algae blooms in Lake Erie, but the tools haven't been quite as sharp as those that measure phytoplankton in the open ocean. Research lead by remote sensing scientists at Kent State University is helping to change that.

Chlorophyll-a is the primary photosynthetic pigment for most phytoplankton in the open ocean, according to Joseph Ortiz, a professor of geology at Kent State.

In that environment, scientists measure electromagnetic energy reflecting off the Earth's surface with satellite-mounted spectrometers. They apply algorithms to the data to develop estimates of how much chlorophyll is present and even the amount of plankton biomass in the water, Ortiz said.

"Where things become complicated is when you move into environments with a large population of organisms that have pigments other than chlorophyll-a that they use for photosynthesis," he said. "Or where there's lots of breakdown and degradation products of chlorophyll and other color producing agents."

That tends to be the case in Lake Erie, where the water's optical properties are complicated by suspended sediment and phycocyanin–a pigment in blue green algae.

Chlorophyll-a absorbs light at particular wavelengths and produces a clear signal in reflectance data produced by spectrometers. But the presence of other pigments or colored materials complicate that signal, masking the identifying marks of the chlorophyll-a fingerprint.

Ortiz and his colleagues have developed a statistical method that simplifies that signal, he said.

"The method that we've developed takes the signature that's generated by all those organisms or all those different classes of material and separates them out," he said. "From that information we can then go back and predict how each of those groups are changing through time and at different places."

The RV Gibraltar III heading out on a field survey of the Western Basin of Lake Erie to obtain water samples for Ortiz’ research. (Credit: Joseph Ortiz) 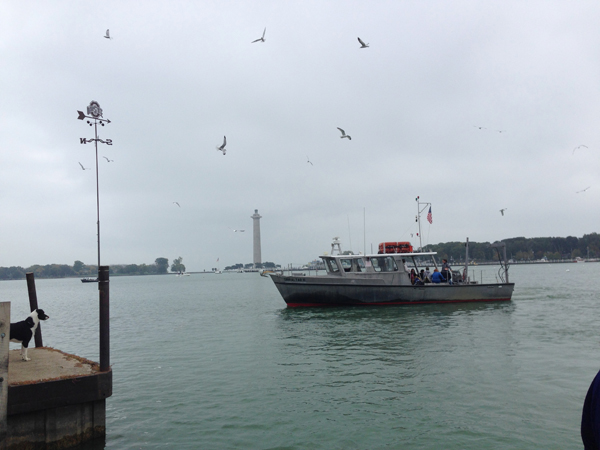 They've verified the method by collecting water samples throughout the Western Basin of Lake Erie, the shallowest and most productive area of the lake. At each sample site, they measured chlorophyll-a and phycocyanin concentrations with a Hach Hydrolab sonde outfitted with two Turner Designs fluorometers. Back at the lab, they analyzed each sample with a benchtop spectrometer to produce data similar to what would be generated from remote sensing satellites.

Applying their statistical process to the spectral data allowed the researchers to produce estimates of which pigments were present in a given sample–an estimate they could verify with the in-situ measurements they collected with the sonde. That information also indicates the retaliative abundance of different groups of phytoplankton in the water. That's an advantage over other current methods that determine the amount of chlorophyll in the water but not the composition of the phytoplankton.

That's important from a management standpoint, Ortiz said, because it means remotely sensed data can be used to tell the difference between a bloom of diatoms and a bloom of potentially toxic blue-green algae.

"That's really advantageous because now we can start to look at different types of critters and whether you have the potential for harmful algal blooms," he said. "If we notice that a harmful algal bloom is occurring in one particular part of the lake, we can alert authorities about that so they can take action."

Photo caption 2: The RV Gibraltar III heading out on a field survey of the Western Basin of Lake Erie to obtain water samples for Ortiz' research.  (Credit: Joseph Ortiz)