Queer Britain opened as the UK’s first LGBTQ museum in London in May and its inaugural exhibition “We Are Queer Britain” won a Museums Change Lives Award (Best Small Museum Project) in November from the UK-based Museums Association. This first installation featured The Queer Pandemic Project, an international collaboration between Queer Britain, University of London, and Kent State University.

The award celebrates UK museums that deliver social impact in order to promote work that supports communities and engages with contemporary issues. “Queer Pandemic,” an oral-history installation, focuses on how the COVID-19 pandemic impacted the LGBTQ community.

“National health disasters impact minorities differently,” says Molly Merryman, Ph.D., associate professor in the School of Peace and Conflict Studies and founding director of the Women’s Center at Kent State. “When LGBTQ people are isolated, we lose our community. A number of people who were out at college were forced back into the closet or forced to live with people who were not supportive of who they are.”

Merryman led the research team which includes Kent State students who have been involved with “Queer Pandemic” since it launched in 2020. Lauren Vachon, the coordinator of the LGBTQ studies program, teaches a research methods class and her students were involved in conducting the ‘Queer Pandemic’ interviews. Student researchers collected remote interviews with LGBTQ people from England, Northern Ireland, Scotland and Wales. PACS student Jeremy Ritch worked with Merryman on photographs and Kent State alum Moira Armstrong continues to serve as the assistant research director.

Merryman began her work as Queer Britain’s research director when the organization formed as a charity in 2018.

“Back in 2018, I was in Liverpool, England, attending an LGBTQ history conference called Outing the Past,” Merryman said. “I just happened to get seated across the table from Joe Galliano who was the founder and CEO of Queer Britain. I offered to help him get a proposal together and at a certain point, both he and I decided that I would step into the position of research director.”

Merryman shared that the most exciting part of working with Queer Britain is the ability to involve students and provide international, hands-on activism. Student involvement inspired the launch of “Queer Pandemic” and augmented the vital relationship between Queer Britain and the School of Peace and Conflict Studies.

“Peace and Conflict Studies, by its nature, is interested in supporting public peace education,” says Merryman. “Queer Britain’s mission is about equity, equality, and transforming society to ensure the absence of the conditions that lead to war. My faculty colleagues in the school and I want to give students that hands-on experience where they can step in and make social change.”

The relationship between Kent State and Queer Britain is rooted in Merryman’s work as an activist.

“I was an activist before I was a professor, and I entered into academia to make change,” says Merryman. “I wanted to go into a profession where I wouldn't be silenced and where I could really bring that activism to it. That's what you see with the changes I’ve made at Kent State. I was brought in as the first Women's Center Director, and while I was still in that position, I worked with faculty to get LGBTQ Studies up and running. We were the first program in Ohio and one of the first in the country.”

Merryman has been a pioneer in LGBTQ activism and has transformed Kent State throughout her tenure by providing students with access to large-scale support, the opportunity to be activists and the freedom to embrace who they are.

“I really wanted to give students from LGBTQ and PAC studies this experience. It’s important not only professionally, but personally,” Merryman said.

The School of Peace and Conflict Studies has also partnered with Wick Poetry Center to expand upon a poetry project called “Viral Versus.” Queer Britain is going to launch Wick’s web-based version of “Viral Versus” in February. 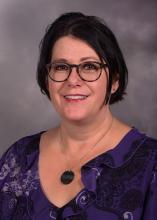 Merryman is a documentary/ethnographic filmmaker, oral historian and cultural historian whose scholarship explores societal marginalization, with a particular focus on gender, gender identity, sexual orientation and race. She has directed and produced nine documentaries that have been broadcast in the United States and United Kingdom and which have screened at academic meetings, museums, galleries and universities around the world, including the MOMA PS, the Library of Congress in the U.S. and the Salisbury Arts Centre in the UK. She is the author of Clipped Wings: The Rise and Fall of the Women Airforce Service Pilots of World War II, first published in 1997 and recently re-released in the New York University Press “Classics” series.

At Kent State University, Merryman was the founding director of the Women’s Center, was one of three faculty who started the first LGBTQ Studies program in Ohio, and she led in the establishments of the LGBTQ Center and the LGBTQ Student Emergency Fund. She is a recipient of the university’s Diversity Trailblazer Award.