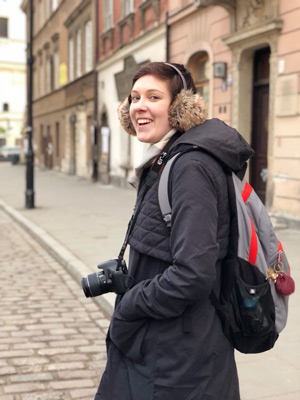 “I was wholeheartedly changed as an individual on that trip (to Poland),” Callen said. “Not only was I learning so much more about travelling abroad, I saw humanity in its rawest form. I feel that everyone should experience the eerie realness of visiting the grounds where it happened. It has made me a stronger activist for the societal outcasts and downtrodden.”

She recently got accepted into a Masters of Legal Studies program at West Virginia University to do exactly that. She believes that it all started with her experiences in Poland.

After her trip to Poland, Chaya Kessler (director of the Jewish Studies Program), recommended that she participate in Hillel’s program abroad to Israel to learn about the Israel/Palestine conflict. There, Ruby continued to learn about the impact that politics has on people who rarely have a say in the decisions.

“I’m so grateful to Chaya Kessler, for being an amazing leader in Poland and fueling my desire to learn even more once we returned to Ohio,” Callen said.

Her Background
Callen, currently living in nearby Stow, Ohio with her girlfriend, grew up in Clarion, Pennsylvania and is a first generation college student.

“No one in my immediate family had travelled outside of the country before me so it was quite the adventure when I did go abroad,” Callen said.

Florence, Italy
She first went abroad the summer after her sophomore year to the Kent State campus in Florence, Italy. At first, she was terrified to go alone but felt committed, and said it was genuinely one of the most eye-opening experiences of her life at the time. She came back from Italy hungering for more international travel. 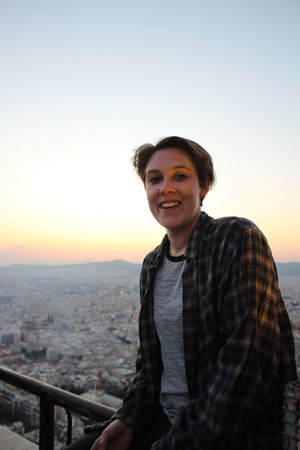 During her senior year, she won a $1,000 scholarship to study abroad after participating in the Run the World 5k that the Office of International Programs and Education Abroad puts on each year. With that scholarship, she chose to go abroad with the School of Theater and Dance to Athens, Greece where they studied Gender and Sexuality.

“I’ve always dreamed of visiting Greece and the group that went made it an unforgettable experience,” Callen said. “Of all of my trips abroad, this one taught me the most about travelling. We scheduled our own flights, did our own travelling, and spent days independently exploring the really neat city of Athens.”

Prague, Czech Republic
After the spring semester of her senior year ended, she attended the Anglo-American University in Prague through a Kent State partnership, and then continued on to do some independent travelling in Israel.

"Strong, Outspoken, and Devoted"
“I am forever grateful for the opportunities that Kent State made available to me,” Callen said. “I came into college as a timid freshman, away from home for the first time, trying to get A’s and get out. If I had never decided to continue on to Italy with a group of students that I had never met, I wouldn’t be the same person I am today. I met incredible faculty and made great friends along the way that helped me grow into a strong, outspoken and devoted individual. None of this was easy though as I had my fair share of difficulties along the way, but I urge other young people to sit in the uncomfortable spaces that come about. I really love speaking about my experiences and encouraging others to take advantage of Kent State's fantastic study abroad programs.”

Back to the full article "Becoming Global Citizens"