The Akron Council of Engineering and Scientific Societies (ACESS) selected Satyendra Kumar, Ph.D., professor of physics at Kent State University, to receive the Distinguished Award of Council. The award was presented at the 66th Annual ACESS Honors and Awards Banquet on Nov. 7 at Guy’s Party Center in Akron, Ohio. 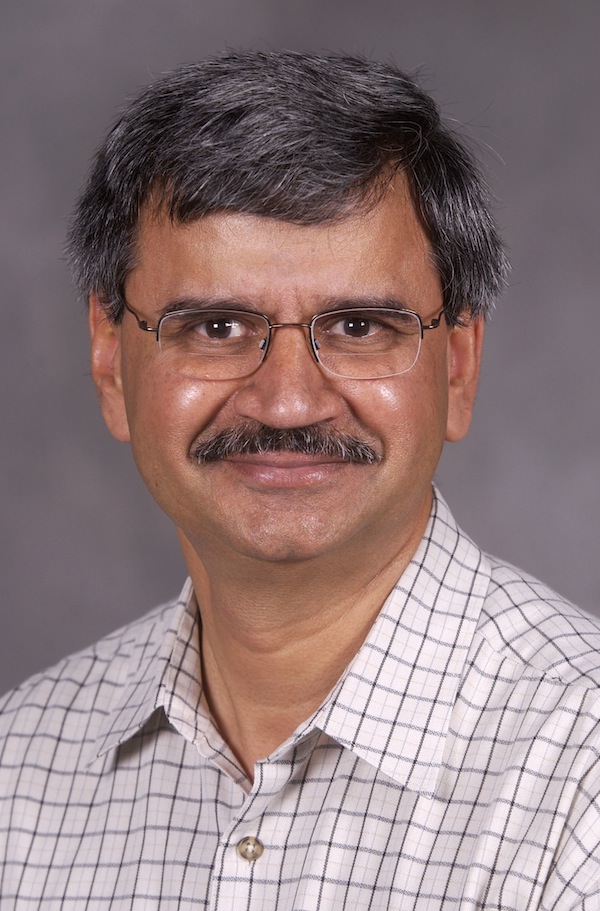 The purpose of the award, given annually since 1959, is to recognize an outstanding Akron-area citizen for his or her involvement in civic activities, as well as technical and managerial abilities. Recipients are noted for their outstanding involvement, which increases the prestige and enhances the image of the engineering and scientific profession.

At the event, Austin Melton, Ph.D., computer science professor at Kent State, and two Kent State students, David Steinberg and Brian Katona, delivered a presentation about internships and co-op programs at Kent State. Certificates of Achievements also were presented to the best science and math students in area high schools, and STEM (science, technology, engineering and mathematics) scholarship awards were presented to Kent State and the University of Akron students.

“It is quite humbling to be in the company of previous recipients of this award, such as Ohio Sen. Thomas Sawyer, University of Akron President Louis Proenza, George Newkome, Raj Chowdhury, Kenneth Batcher, Akron Mayor Don Plusquellic and other stalwarts of our society,” Kumar said.

A professor at Kent State since 1987, Kumar was named a Distinguished Scholar by the university in 2007. During his time at Kent State, he has served as a graduate coordinator and most recently as associate vice president for research. He also served as a program director at the National Science Foundation (NSF) where he was awarded the NSF Director’s Award for Merit Review Excellence, Interdisciplinary Condensed Matter Physics Team in June 2007. His research areas include liquid crystal physics and organic photovoltaics with expertise in liquid crystal structures, X-ray diffraction, small angle neutron scattering, thermal measurements and electro-optical devices.

Kumar has been engaged in civic activities both locally and regionally. He was a member of the advisory committee of the India Sunday School in Akron, served as a judge at the Science Olympiad competition at the University of Akron and formed a group of 15 graduate students and several faculty members to serve as mentors to Kent Middle School’s class of gifted science students.

Kumar has participated in events organized by the Northeast Ohio Technology Consortium, BioOhio, PolymerOhio, FlexMatters and served as a member of the Executive Board of the University Clean Energy Alliance of Ohio for three years. He coordinated a major joint proposal for the establishment of an Energy Frontier Research Center to the U.S. Department of Energy and participated in meetings of the stakeholders of Water Resource Research and Management in Northeast Ohio.

Kumar assisted with a successful proposal to the Ohio Board of Regents, led by Melton and Stephane Booth, Ph.D., former Kent State associate provost who retired earlier this year. The proposal led to $700,000 being made available for multiyear student internships at local Ohio companies. Kumar also helped to secure Kent State’s membership in the Ohio Space Grant Consortium, which makes scholarships and fellowships available to Kent State students in STEM disciplines.

Kumar holds bachelor’s and master’s degrees from the Physics Honors School at Panjab University, India, a Master of Science degree from the University of Nebraska and a doctorate from the University of Illinois at Urbana-Champaign. He also served as a postdoctoral research associate at the Massachusetts Institute of Technology (MIT). Before joining Kent State in 1987, he worked on liquid crystal light valves at Tektronix Inc. in Beaverton, Ore. Kumar lives in Kent, Ohio.