After the tsunami hit Japan in 2011, like most young people her age, Kent State senior English major Alexandria Rhodes of Tallmadge, Ohio, turned to Twitter for updates about the disaster.

After the tsunami hit Japan in 2011, like most young people her age, Kent State senior English major Alexandria Rhodes of Tallmadge, Ohio, turned to Twitter for updates about the disaster. But rather than just monitor events from across the pond, she was moved by the plight of the victims and went a step further by getting involved. With help from friends, Rhodes decided to raise funds to help the victims. What began as a goal to raise $5,000 resulted in the team collecting close to $70,000 within just three months. 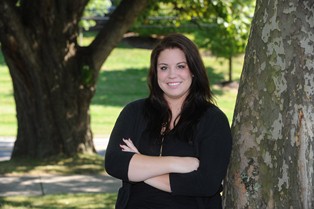 “I remember sitting in my room that morning and literally watching Twitter,” Rhodes said. “It was almost as though Twitter was used to help families find their loved ones and get caught up on what was really going on. To see the power of social media in action during such a tragic time was so powerful, and so I wanted to see how I could help victims myself.”

How Did She Do It?

Rhodes had observed successful fundraisers on social media in the past and thought it would make a perfect fundraising tool for the tsunami victims. A testament to the power of social media, she partnered with a friend on Twitter, who lives in Georgia and whom she had never met, and two other friends to create a fan fiction fandom using social media – a group of people who are passionate about fan fiction. Using social media – Facebook, Twitter, blogs, and more – they spread the word to authors and celebrities willing to contribute a story as part of a compilation that donors receive after giving a minimum of $10 to assist the tsunami victims.

Among the dozens of authors who volunteered original works was E.L. James, author of the top-selling “Fifty Shades of Grey.”

“We started off by creating a Twitter account for the fundraiser to alert people about it,” Rhodes said. “We started asking websites to tweet about it and also celebrities. We then started contacting fan-fiction and also original fiction writers to be a part of the project. Once the word started to get out, we created a Web page where we would post news, author sign-up forms, a list of contributing authors and the total amount that had been raised.”

The campaign got the attention of other renowned authors, including J.M. Darhower who authored “Sempre.” In all, 218 authors donated about 250 fan fiction, poetry and original fiction stories, and more than 1,500 people donated funds to support the cause.

“There are so many popular authors on Twitter that write fan fiction,” Rhodes said. “People would do anything to have an exclusive piece of writing from their favorite story or author. We had celebrities and conventions like Creation Entertainment donate autographed photos and anything that would catch the eye of a fan.”

Rhodes and her friends had more than 1,000 Twitter followers in just two months of launching the campaign.

“We did a lot of tweeting and asked people to help retweet,” she said. “We affiliated with a few websites, mostly fan sites with a large following, and they would post every few days about our fundraiser.”

The money donated went to the tsunami relief fund set up by the Red Cross.

Excited by the success of this campaign, Rhodes is already working on her next feat, helping to raise funds for To Write Love on Her Arms (TWLOHA), a suicide prevention awareness organization.

“I get a good feeling anytime I’m able to help people who are less fortunate than I am,” she said.