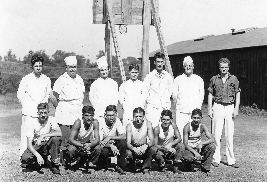 One of the most popular trails to hike in Cuyahoga Valley National Park is the Ledges, which takes visitors in a circular path past Ice Box Cave, massive ledge walls and a vista overlooking Akron and Cleveland, the elevations eased by hewn stone steps.

The trail, steps and overlook -- even the trees on the hills -- were put in place in the 1930s by young men who were rescued from long-term unemployment by the New Deal’s Civilian Conservation Corps. A historian and his students at Kent State University have told their story in a new book published by the Kent State University Press, The Civilian Conservation Corps and the Construction of the Virginia Kendall Reserve, 1933-1939.

Today, most people hiking the Ledges and the other trails nearby in the Virginia Kendall Reserve area of Cuyahoga Valley National Park off Truxell Road have no idea that in the 1930s the land was largely unforested, says Kenneth J. Bindas, professor and chairperson of the history department at Kent State.

A scholar of the 1930s and the Great Depression, Bindas became curious about the Kendall Reserve after hiking there with his family. He gathered primary source materials about the Civilian Conservation Corps and its role in creating the park, and used them in his 2009 class on the Depression era, teaching graduate and upper-level history students how to research and write history.

Their best papers, along with his research, formed the basis of the book, which he edited.

In the 1930s, the Kendall Reserve was a metro Akron park. It was later enfolded into what became Cuyahoga Valley National Park. The land, inherited by the widow of Cleveland businessman Hayward Kendall and given to the parks, was molded by the vision of Akron parks director Harold Wagner. He was an adherent of the modernist “parkitecture” movement of designing the visitor’s experience with nature. Trails were mapped with the idea in mind that “when you turn this bend, you’ll see this,” says Bindas. The movement reinforced the goals of the Civilian Conservation Corps, which worked in parks throughout the U.S.

“Those in charge of the Civilian Conservation Corps believed nature needed to be made more ‘natural’ than its wild state,” the authors wrote. 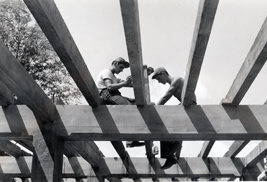 Wagner was one of the first park directors to take advantage of the manpower supplied by the Civilian Conservation Corps, which formed in 1933. The New Deal program was directed at the nation’s youth – 17- to 21-year-olds – who had a 38 percent unemployment rate, double the national average in the Depression, and no hope for jobs. They were fed, housed in barracks and camps and paid $30 a month, $25 of which they had to send home to their families. They were trained in construction and craftsmanship as well as vocational and literacy skills as they learned how to work as a team and adhere to the expectations of employers.

“It was done to create a generation of citizens that could see the government doing something for them,” says Bindas. The money spent on the Civilian Conservation Corps was “such a drop in the bucket compared with the benefit.”

In what is now Cuyahoga Valley National Park, the Civilian Conservation Corps men quarried rock from Deep Quarry in Peninsula and built the stone steps for the Ledges trail. They created a 600-foot toboggan run on a then-barren hill into Virginia Kendall Lake, which they dug. They constructed picnic shelters and lodges that still are in use, the timbers sawed from dead American chestnut trees that they cleared. They planted more than 60,000 trees and shrubs and hauled by wheelbarrow 624 cubic yards of hand-mixed concrete for the Kendall Lake dam.

As they built the park, they built their own skills. As the authors wrote, the men regained a sense of pride and masculinity that the Depression had depleted.

“It was amazing and transformative for young men,” says Bindas.

The results of their work stand today on the trails and in buildings such as the Happy Days Lodge (then the Civilian Conservation Corps barracks) on Route 303, where Bindas will give a free public lecture at 7 p.m. on April 8, followed by a reception and book signing, sponsored by the Cuyahoga Valley National Park and the Conservancy for Cuyahoga Valley National Park.