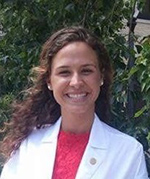 Kristen has served as the delegate for the KSUCPM Class of 2020 since 2016.  As a delegate, Kristen has had the opportunity to advance the profession of podiatry in many different ways. She attended the Legislative Conference in Washington D.C. to lobby for the VA Provider Equity Act. This act, which was subsequently passed by Congress in June 2018, ensures podiatric physicians’ parity in the VA system. Kristen also attended the Science and Management Symposium to discuss student recruitment into the profession of podiatry. She has also been the guest speaker at Kent’s main campus as well as her alma mater Monmouth University where she spoke to undergraduate students and health advisors about a career in podiatric medicine. In August of 2018, the OCPM Foundation awarded Kristen the Outstanding Leadership Award in recognition of her outstanding leadership, support and dedication.

Now, as president, Kristen will be the voice at the national level for all podiatry students which attend the nine podiatric schools and she will work hand-in-hand with the APMSA executive director. She will also serve as a voting member on the Board of Trustees of the APMSA as well as a voting member at the yearly APMA House of Delegates meeting.

Kristen graduated Cum Laude from Monmouth University in West Long Branch, New Jersey with a degree in Biology and was a member of the Monmouth Women’s Soccer team serving as captain in her senior year. Kristen knew that she wanted a career in the health field but it wasn’t until her freshman year in college that she learned about podiatric medicine. The ability to select a surgical specialty as well as have a rewarding career experience was something that Kristen has always wanted. After interviewing at KSUCPM she knew right away that this was going to be her home for the next four years. Although being a podiatric medical student is a demanding undertaking, Kristen finds the most joy when serving as a tutor to many of the first- and second-year students. In her free time, she enjoys exploring Cleveland with her friends as well as playing on the KSUCPM’s club soccer and basketball teams.