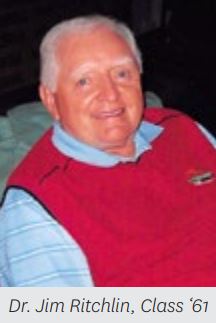 Dr. Jim Ritchlin, Class of 1961, has resided in Columbus, Ohio and practiced podiatry for the last 54 years in Lancaster, Ohio. He continues to work in his practice one day a week with his partner in practice for 18 years. When he decided to become a podiatrist, it had been a sort-of family tradition: his father and uncles and a brother were also practicing in the field of podiatry.

Dr. Ritchlin was one of the first podiatrists in Columbus to have a 2-year surgical residency. At that time, podiatrists were not able to get into hospitals and surgery was done in his office. In addition to working in his practice, Dr. Ritchlin spent 8 years as the podiatric consultant with Medicare and had the opportunity to work at The Ohio State University Department of Surgery teaching medical students and nurses about podiatry.

Reflecting on the growth of the profession from the time he began his career, Dr. Ritchlin was excited to speak with the students he met during KSUCPM’s Alumni Reunion Weekend. The students have the opportunity to receive training in hospitals, and the campus compared to the building on Cornell Road, Ritchlin described as “highly impressive.”

Seventeen years ago, Dr. Ritchlin had an opportunity to take his talents and passion, and give back to the community. He collaborated with a minister from a small church in Columbus that already offered a food pantry and clothing assistance, and together, they began a free medical clinic. Initially the free clinic program started with Dr. Ritchlin and he recruited four other specialists to join him. Today they have 4-6 medical students that join him and about 4 other practicing specialists to treat individuals within the community. The free clinic treats as many as 60 patients in one day, however the average is about 30-40 community members, made up of 90% men and 10% women. Many of the treatments are preventative and educational, and when needed, the doctors buy medicine out of their own pocket to distribute to the patients.

The patients consist of individuals who do not have health insurance, and are often found to be homeless. Dr. Ritchlin said the patients are so appreciative for the care provided to them, he has become friends with many of the patients he sees on Sunday mornings. “They just like knowing someone sees them, they’re not invisible.”

Dr. Ritchlin seems to have a long time interest in giving back to the community. He served as President of the Literacy Council for four years, which is an organization that teaches others to read. He volunteered with the organization for 5 years.

Dr. Ritchlin has proven to be on the go throughout his career. He has been active in sports including varsity baseball and tennis during his undergraduate studies at Xavier University, with a history of playing golf, including winning the Senior Golf Championship at Lancaster Country Club four different times, as well as coaching his children’s sports when they were younger. He has devoted his life to helping others in the community and spending time with his family whether it be in his hometown or visiting his son in Vancouver. We are honored to have an alumnus like Dr. Ritchlin doing the profession, and the college, proud.