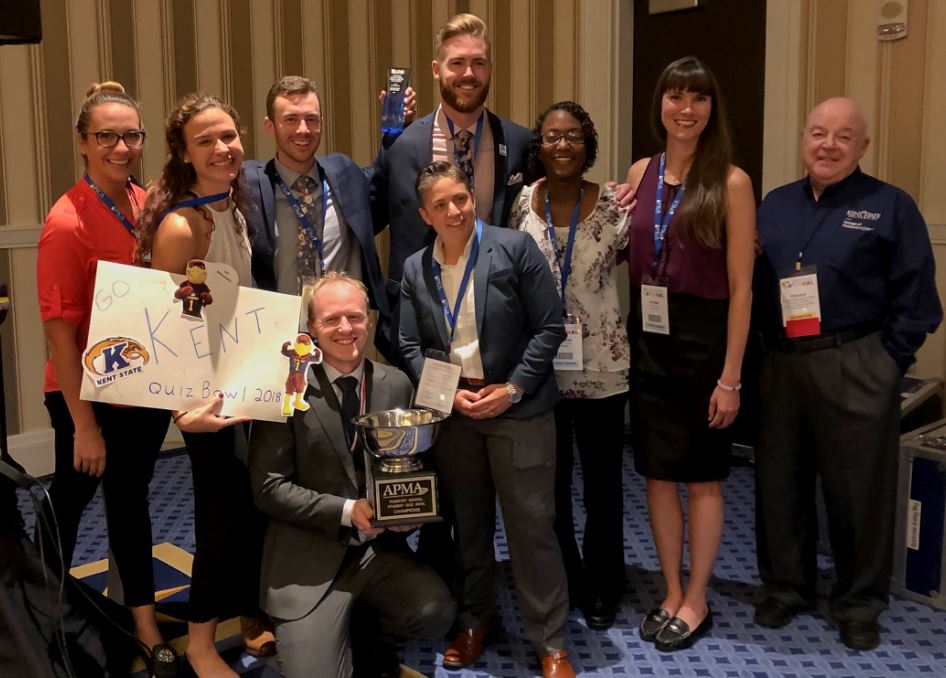 If you attended this year's APMA National meeting in Washington, D.C., you may have had the pleasure of attending the second annual APMA Student Quiz Bowl. The APMA Student Quiz Bowl had a representative from all nine accredited podiatry colleges, who had to answer categorized questions valued at different ranges of points depending on the difficulty of the question. The final question of each round allowed contestants to wager their points. After three rounds, the finalist from each round competed for the trophy. This year, we are proud that the trophy is being displayed in our college, won by fourth year KSUCPM student, Brandon Rogers.

Brandon received a B.S. in Biology from the University of Washington. After undergraduate school, he studied HOX gene expression in developing limbs at Shriner's Hospital for Children in Portland, Oregon. After spending a few years performing craniotomies and implanting 5mm cranial windows into living mice at the Allen Institute for Brain Sicence, he chose to participate in the DPM Mentors Network program through AACPM. He met Dr. Dough Ichikawa and was amazed at his love of the field, leading both he and his wife Kelly Rogers, MSIV, to podiatry school at KSUCPM. Brandon says the thing that excites him about podiatry is "That in a given day you can go from preventative nail care on a diabetic neuropathic patient, to treating club foot on a toddler, to implanting or revising a total ankle replacement and everything in between." In addition to clinical work, Brandon is motivated in helping the field through research. He is appreciative for the opportunity to participate in SABER, a new initiative at KSUCPM, started by faculty members, Drs. Duane Ehredt and James Connors, to get students involved with research projects. Most recently, Brandon traveled to California to present a poster on a cadaveric study on the Percutaneous Harvest of Calcaneal Bone Autograft: Evaluation of Complications, Quantification of Volume, and Defining Anatomical Safe Zones.

Brandon says he was "excited to attend The National to hear discussions on new trends in the field. But I would be lying if I said I wasn't a bit anxious heading into the Quiz Bowl. You don't know what to expect until you are up in front of the room full of attendings, residents, and students." He went on to thank the OCPM Foundation for their support of The National and the APMA Student Quiz Bowl. In addition, to their sponsorship, the American Society of Podiatric Medical Assistants donated $2,000 in prizes for the student participants. Brandon said he wanted to be sure to give special recognition to his wife, Kelly, whom has been caring for their 10-month-old baby girl this year, often on her own because they are not in the same fourth-year rotation group. Congratulations again, Brandon, on a successful win at the quiz bowl.