Serving their Profession and a Nation

Celebrating alumni in the Armed Forces this Veteran's Day 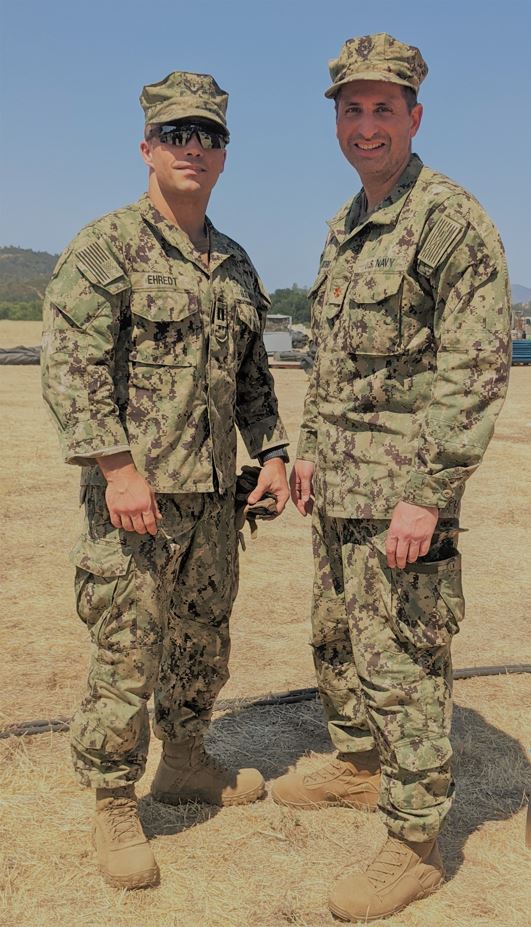 Doctors Duane Ehredt Jr. and John Lagoutaris have two very important things in common: both are alumni of Kent State University College of Podiatric Medicine (CPM), and both are officers in the United States Navy Reserve.

Once a student in the class of 2011, Dr. Ehredt now works as an Associate Professor in the Division of Foot & Ankle Surgery and Biomechanics in addition to treating patients in CPM’s teaching clinics and St. Vincent Charity Medical Center in Cleveland. But serving his alma mater through the training of today’s student doctors doesn’t stop him from serving his country as well. In 2017, Dr. Ehredt joined the Expeditionary Medical Facility, Great Lakes One, as a Lieutenant in the Medical Service Corps for the United States Navy Reserve.

Meanwhile in Florida, CPM Class of 2004 grad Dr. John Lagoutaris serves his community in podiatry, as well as a Lieutenant Commander in the United States Navy Reserve. “I met LCDR John Lagoutaris while on orders with the United States Navy,” Dr. Ehredt tells us. The pair supported operations during Combat Support Training Exercise / Global Medic 2021 at Fort Hunter in Liggett, California. Throughout the training exercises, the Expeditionary Medical Facilities that both doctors belong to supported medical operational training. Here, it’s their duty as physicians to conduct health support services during exercise operations to enhance the lethality, combat effectiveness, and operational capabilities of the exercise.

Dr. Ehredt worked as a podiatrist in the operating room / surgical services department, while Dr. Lagoutaris served as a podiatrist in the Acute Care Ward. The pair frequently shared patients and participated in the direction and leadership of their prospective divisions. Though he wasn’t in attendance at this exercise, John’s brother, Captain Efstratios Lagoutaris, a Class of 1999 CPM grad serves as the specialty leader and plays an important role in what the team does. “Both gentlemen are mentors to the newer podiatrists including myself,” Dr. Ehredt reports of Drs. Lagoutaris.  CPM would like to thank Drs. Ehredt, John and Efstratios Lagoutaris, as well as all its alumni in the United States Armed Forces for their service to both their profession, and their country. In addition, CPM is proud to congratulate Dr. Ehredt on his recent promotion to Lieutenant Commander and receipt of a Navy and Marine Corps Achievement Medal.