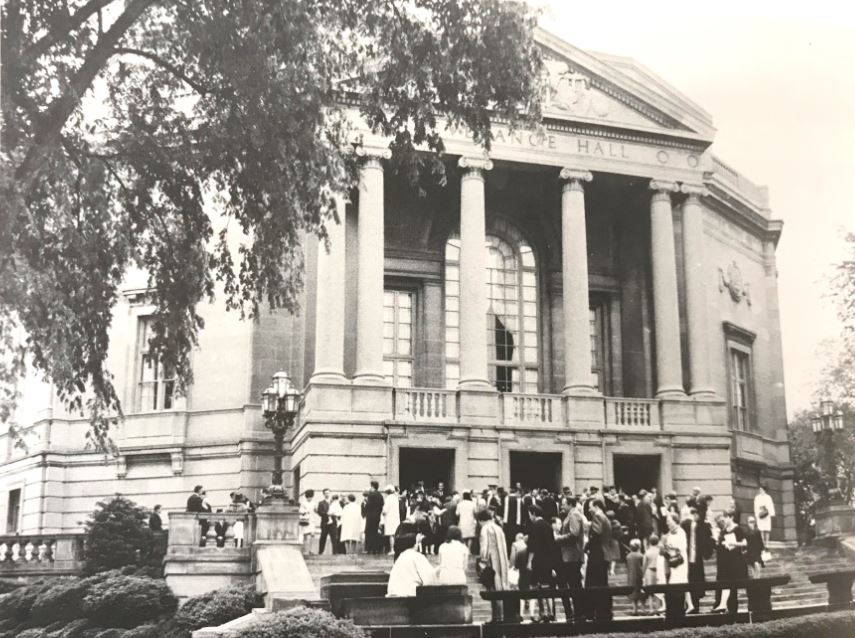 Severance Hall in Cleveland, OH boasts a rich history of music, culture, architecture and, yes, an estimated 40 graduation ceremonies where hundreds of young students became Doctors of Podiatric Medicine. The Hall’s architectural significance has been recognized by local and national preservation societies, including the Cleveland Landmarks Commission and the National Register of Historic Places. This August, alumni, family and friends of Kent State University College of Podiatric Medicine will bask in the grandeur of Severance Hall to bestow honors upon several alumni, including the induction of three into its Hall of Fame Society. Before attending the Alumni & Hall of Fame Awards Dinner on Saturday, August 18th, here is the history of Cleveland’s long-beloved Severance Hall.

With his wife, Elisabeth, John Long Severance, president of the Orchestra’s board of trustees, Cleveland industrialist and generous philanthropist, announced a $1 million pledge (worth $24bn today) toward a permanent home for The Cleveland Orchestra.  Upon the untimely death of Elisabeth, John devoted all of his energy towards completing this new Hall as a memorial to his wife, and the total investment of the project grew to nearly $7 million. The Orchestra chose a location in the heart of Cleveland’s University Circle, home to many cultural, medical and educational institutions.

John strived for an elegant structure that incorporated the finest materials and the most advanced features. A Georgian exterior echoed that of the nearby Cleveland Museum of Art, and was crafted with Ohio sandstone and Indiana limestone. Interior elements fancy a more eclectic style, including Art Deco, French Nouveau, Classicism, Egyptian Revival and Modernism, and are tied together by the patterns of his wife’s favorite flower, the lotus blossom.

Construction began in December 1929, and saw completion just in time for the first home performance by The Cleveland Orchestra on February 5, 1931. With age came refurbishments to improve the acoustics of the Hall, and the addition of a restaurant. In 1997, with a $36.7 million commitment to the project, Severance’s 2,000-seat Concert Hall, the 400-seat Reinberger Chamber Hall, and the Grand Foyer were faithfully restored to preserve the historical integrity. Severance Hall reopened on January 8, 2000, as a long-beloved concert hall returned to the service of its world-class Cleveland Orchestra.

If you graduated from OCC, OCP, or OCPM, Severance Hall may hold a special place in your heart, where many of you stood and recited the Podiatric Physician’s Oath, becoming a Doctor of Surgical Chiropody or Doctor of Podiatric Medicine. It is the College’s relationship with this grand, beloved piece of Cleveland history that makes Severance Hall the perfect location for this year’s Alumni & Hall of Fame Awards Dinner. Click Here to register and celebrate our alumni and partake in the future of Kent State University College of Podiatric Medicine, and Cleveland’s beautiful Severance Hall.