The concepts of mass violence and war evoke strong emotions for most people – and the thought of where they have occurred is often a side note. But one Kent State University professor’s unique perspective on the geography of these events has resulted in recognition of his work in the geographic research field. 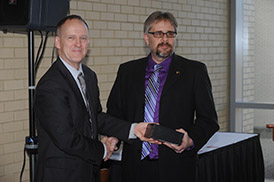 James Tyner, Ph.D., professor in Kent State’s Department of Geography in the College of Arts and Sciences, received an Outstanding Research and Scholarship Award for his work in bringing a geographical perspective to issues of war, violence and genocide.

Kent State’s Outstanding Research and Scholarship Awards recognize outstanding faculty members for their notable scholarly contributions that have brought acknowledgement to their fields of study and to Kent State.

“It’s a tremendous honor to receive this award,” says Tyner. “It is in part a reflection of the support I’ve had from the department, the college and the university.”

Tyner is a human geographer with an emphasis in political and population geography. He has had 12 scholarly books published, including his book War, Violence and Population: Making the Body Count, which won the 2009 Association of American Geographers’ Meridian Book Award.

For the last 10 to 15 years, Tyner has been focusing on viewing social and political issues like war, violence and genocide, but through a geographer’s point of view. Recently, he has been trying to understand, both theoretically and empirically, the mass violence in Cambodia, specifically the genocide from 1975-1979.

“Geography has not historically engaged with genocide or mass violence,” says Tyner. “As a geographer, I’m focused on the ‘where’ of occurrences. After starting my research on the Cambodian genocide, there were a number of geographical questions that weren’t answered because they weren’t asked.”

Much of Tyner’s work has been analyzing archival documents to reconstruct the day-to-day political and economic activities during that time. By doing this, he has been able to recreate what was happening on the ground in Cambodia, which in turn, provides insight into the mass violence of that period.

Tyner received his doctorate degree from the University of Southern California and came to Kent State as an assistant professor in 1997. He currently teaches courses including Geography of East and South East Asia, Political Geography and a graduate-level course, Seminar on Geographic Thought.

He currently is a member of the Association of American Geographers, and has recently finished a three-year term as the organization’s national councilor, where his duties included setting agendas and helping to formulate policies for the group and its more than 10,000 members.

Tyner says that he is grateful to have had the opportunity to pursue his research at Kent State.

For more information about Kent State’s Department of Geography in the College of Arts and Sciences, visit www.kent.edu/cas/geography.