Kent State University’s Department of Pan-African Studies will hold a roundtable discussion on police state, militarism, brutality and the use of deadly force at an upcoming event. 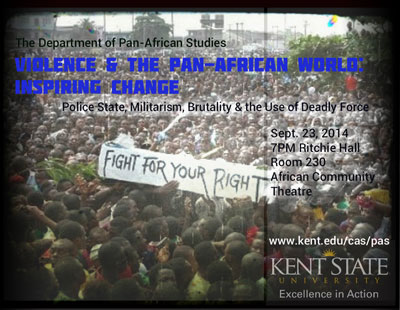 “Violence and the Pan-African World: Inspiring Change” will take place Sept. 23 at 7 p.m. in Room 230, African Community Theatre at Ritchie Hall. This event is free and open to the public.

Kent State professors and community organizers, including George Garrison, Ph.D., professor in Kent State’s Department of Pan-African Studies, Linda Piccirillo-Smith, associate lecturer at Kent State, and Kent State alumnus DaMareo Cooper, will participate on the panel. This event will kick off a yearlong conversation that will address the issue of violence on a national and global scale, and the impact it has on people of African descent.

Future events in this series include: