Mindy Farmer, Ph.D., has been selected as the new director of the May 4 Visitors Center in the College of Arts and Sciences at Kent State University. She started her new position on July 1. Farmer also will teach public history courses in Kent State’s Department of History as an assistant professor starting in spring 2015. She most recently served as an education specialist at the federal Richard Nixon Presidential Library and Museum in Yorba Linda, California. 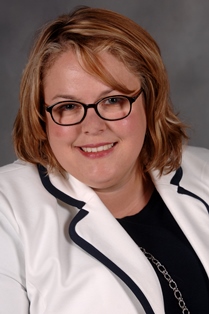 “We are excited to welcome Mindy to Kent State,” said Todd Diacon, Ph.D., Kent State’s senior vice president for academic affairs and provost. “She brings a wealth of experience and energy, and we think she will provide outstanding leadership for the May 4 Visitors Center.”

Farmer succeeds Laura Davis, Ph.D., professor emerita of English, who retired June 30 after serving as founding director of the May 4 Visitors Center, which opened in October 2012. Davis, a Kent State freshman in 1970 who witnessed the shootings, was one of the four co-authors of the application to add the May 4 site to the National Register of Historic Places. She and Carole Barbato, a professor emerita of communications studies at Kent State who passed away April 30, 2014, co-taught the university’s May 4 course and co-chaired the 2009 Symposium on Democracy. Working with university and community members, Davis coordinated and co-led the creation of an audio-guided walking tour of the May 4 historic site that was dedicated during the 40th commemoration.

“I am humbled to stand on the shoulders of giants,” Farmer said. “From the faculty who worked to build the center, to the deans who pledged their support, and the students who continue to inquire, learn, and reflect, I know that this is a campus dedicated to understanding its past.”

Davis welcomes Farmer’s arrival and said, “During her interview at Kent State, Mindy Farmer commented, ‘You have to make peace with controversy. It is in such events that you become stronger critical thinkers.’ With such wisdom and knowledge, she will advance the May 4 Visitors Center as a place where students and members of the public may learn important lessons that make them stronger citizens of the democracy in which they participate.”

One of Farmer’s very first job opportunities at furthering nonpartisanship at the once private Nixon Library was to rewrite the panel on Kent State to acknowledge – in clear terms – that the National Guard was responsible for shooting the students.

“Mindy studied and taught in Ohio and is coming to Kent after an excellent period working as an education specialist at Richard Nixon Presidential Library and Museum,” said James Blank, Ph.D., interim dean of Kent State’s College of Arts and Sciences. “She has a strong commitment to public history, especially in the context of what it can tell young students about our country. This position is a natural fit for her. The biggest immediate opportunities for the center are in meeting the significant interests of such a large and diverse community, both on and off campus.”

Farmer said she plans to use the events of May 4 as a teaching tool by:

“Sometimes, it is in the difficult moments that we can learn the most,” Farmer said. “The mission of this center is to continue the conversation that started in the 1970s using the technology and issues of today. I firmly believe that Kent State should lead the national, and indeed international, discussion on how to teach and interpret the events of May 4, 1970.”

Before joining the center, Farmer served as the founding education specialist at the federal Richard Nixon Presidential Library and Museum since 2009. Her primary mission was to further the nonpartisanship of the once highly partisan, private institution. She played a key role in some of the Nixon Library’s most high-profile successes, including the creation of the Watergate Gallery and the first academic conference. She also worked closely with local educators on a variety of programs and oversaw the school tour program.

“The history department is excited to have Dr. Farmer join Kent State and our department as she will be teaching a public history course using the May 4 center regularly,” said Kenneth Bindas, Ph.D., professor and chair of Kent State’s Department of History.

About May 4, 1970
On May 4, 1970, Kent State was placed in an international spotlight after a student protest against the Vietnam War and the presence of the Ohio National Guard on campus ended in tragedy. Thirteen seconds of rifle fire by 28 Ohio National Guardsmen left four students dead, one permanently paralyzed and eight others wounded.

About Kent State University’s May 4 Visitors Center
The May 4 Visitors Center is located in room 101 of Taylor Hall at 300 Midway Drive on the university’s Kent Campus. Using images, artifacts and multimedia, the center’s exhibits tell the story of the decade leading up to May 4, 1970, the events of that day, the aftermath and the historical impact.