The toxic algae bloom crisis in Toledo in 2014 put the issue of water treatment front and center, and problems like those in Flint, Michigan, and Sebring, Ohio have only added more weight to the discussion.

Xiaozhen Mou, Ph.D., Associate Professor of Biological Sciences, is working with colleagues at the University of Toledo to help cities keep residents safe. Mou co-principal investigator on a project — “Engineering Biofilm Dynamics for Cyanotoxins in Biological Water Treatment” — funded by a three-year $329,688 grant from the National Science Foundation. She will collaborate with Dr. Youngwoo Seo, Associate Professor of Civil Engineering at UT.

“This project targets how we can use bacteria to improve efficiency in water treatment plants,” Mou said. “We can isolate the bacteria that are capable of degrading cyanotoxins.”

Mou, a microbial ecologist, said cyanobacteria are naturally occurring, but in places like the Maumee Bay of Lake Erie — the site of Toledo’s toxic 2014 algae bloom — the concentrations are too high, leading to dangerous levels of cyanotoxins. 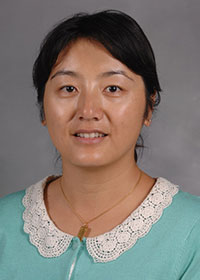 “Current water treatment processes for cyanotoxin removal are very expensive,” she said. “So if we can introduce helpful bacteria into the process which will eliminate cyanotoxins, water treatment could be more efficient and less expensive.”

Mou said her team has already isolated more than 40 different types of bacteria that are able to degrade cyanotoxins. The project involves creating a small-scale water treatment plant model, and comparing the degradation rates of the different bacteria strains, and their response to water plant conditions.

So far, the research in this area has only allowed for laboratory simulations, so the team doesn’t yet know how each bacteria type will behave in the water plant conditions.

The most important aspect, Mou said, is whether or not the conditions will allow cyano-degrading bacteria to form a biofilm — a layer of microorganisms that colonizes on the filtration surface and doesn’t wash off, creating a kind of sieve that degrades toxins as water passes through.

Mou’s team is responsible for isolating and characterizing the bacteria capable of degrading cyanotoxins, and testing toxin degradation under different conditions, including temperature, acidity, and inorganic and organic nutrient content level conditions.

They will then send the bacteria to Seo at Toledo, where his bio-engineering team will study the internal structure of the biofilm.

Mou said some of her bacteria isolation work is also partially funded through an existing grant from the Ohio Higher Education Fund.