Teaming Up To Tackle Toxic Waters

Like a financial analyst who pores over numbers to predict the next big trend, Joseph Ortiz, Professor of Geology at Kent State University, is an expert at crunching earth data.

An oceanographer, Ortiz’s most recent efforts are focused on the harmful algae blooms that plague Lake Erie and pose a threat to the safety of lake-front communities and their drinking water.

Ortiz is a co-investigator on a grant from the NASA Glenn Research Center in Cleveland that is allowing he and his colleagues from several Ohio and Michigan institutions to use their findings to more accurately target water treatment efforts, to reduce the impact of the blooms.

The work is part of a large, collaborative study that covers the waters of the western basin of Lake Erie from Maumee Bay to the Detroit Plume and Sandusky Bay.

Blue-green algae, scientifically known as cyanobacteria, are common to freshwater systems such as lakes and streams. When growing unchecked, however, some of these cyanobacteria can produce harmful algae blooms.

It was this kind of toxic cyanobacteria that overran western Lake Erie and parts of the Maumee River in 2014, causing the mass contamination the city of Toledo, Ohio’s drinking water.

Scientists, including Ortiz, are using NASA’s hyperspectral imager to isolate the cyanobacterial signal, to more closely monitor its growth and movement.

Ortiz has spent much of his research career developing a method for drawing meaningful information out of complex data by examining color-producing agents in the water and how they react to light.

“Any material that absorbs or scatters light is going to produce a reflective spectrum that is indicative of what is present. But we’re dealing with multiple materials, so we need to separate them,” Ortiz said.

The NASA device measures the wavelengths of light reflecting from the water as well as the down-welling sunlight that illuminates the scene. 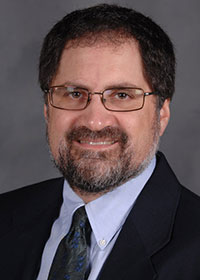 “That information is necessary to identify the lake signatures measured by the instrument and to distinguish them from atmospheric influence,” Ortiz said.

The clean, unmixed spectra can then be compared to pigment spectra from previously cataloged water or sediments to help determine what is in the water, he said.

“I used a method I had learned in one field and applied it to very different kinds of questions,” Ortiz explained. “I like to think outside the box in addressing problems.”

Out-of-the-box thinking might be the only way to theorize for a professor of oceanography in land-locked Ohio.

After arriving at Kent in 2001, Ortiz wanted to find projects to provide work experience for his students. As an oceanographer, he also was searching for a way to get back on the water. In Lake Erie, Ortiz found both.

He has been studying Ohio’s Great Lake since 2004.

Ortiz is the lead author of the article, “Intercomparison of Approaches to the Empirical Line Method for Vicarious Hyperspectral Reflectance Calibration,” published recently in Frontiers in Marine Science.

He also was selected as a 2017 fellow in the Geological Society of America.

Ortiz’s passion for helping students is equally committed off the water. He is dedicated to increasing the number of minority students in earth sciences.

Ortiz, the son of Puerto Rican parents who moved to New York in the 1950s, had just started his career at Kent State when he came across a startling graduation statistic: In 1995 only three Hispanic Americans were awarded doctorates in oceanography.

“I realized that I was one of those three. That really brought it home for me, that there are so few oceanographers who are Hispanic,” he said.

During his tenure at Kent State, Ortiz has worked with the Student Multicultural Center and the university’s Division of Diversity, Equity and Inclusion, to take an active role in a variety of programs aimed at increasing enrollment, student retention and graduation rates among minorities.

Ortiz’s work in the Diversity Division documented that universitywide efforts have increased retention rates among underrepresented populations by 14 to 24 percent, depending on the program.

Currently Ortiz is a participant in Sparks for Change, a program funded by the National Science Foundation, which seeks to increase minority populations within the earth sciences.

“I provide mentoring and help them build access to build access to the infrastructure within the university and the resources available to make a difference,” Ortiz said.