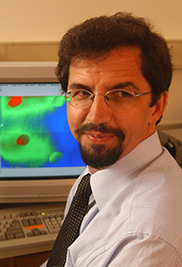 A research group at Kent State University has described the structure of a new type of liquid crystal that had been predicted theoretically but never seen.

The new “twist-bend nematic” liquid crystal, one with a spiral twist, was observed by a Kent State research group led by Oleg D. Lavrentovich, Ph.D., D.Sc., Trustees Research Professor of chemical physics and former director of the Liquid Crystal Institute® at Kent State.

The new type of liquid crystal, akin to a new species in biology, might enable new technologies, ranging from faster-switching display devices to biological sensors, according to Lavrentovich.

The most widely known liquid crystal to date, called the nematic, made possible an entire industry of liquid crystal displays used in flat-panel televisions, mobile electronic devices and laptop computers.

“It remains to be seen whether this new liquid crystal can bring a similar level of revolutionary changes,” said Lavrentovich.

The research was reported in the Nov. 5 issue of the journal Nature Communications.

The Kent State group collaborated with researchers in Ireland, who provided materials, and the United Kingdom, where scientists synthesized the molecules that were then observed with a Cryo-Transmission Electron Microscope (TEM) in the Liquid Crystal Institute at Kent State. The microscope, funded under a $15.2 million Ohio Third Frontier grant, made it possible to see the structure at the nanoscale level – down to one fifth of a nanometer.

The pitch, or distance between two spirals in the observed material, was 8 nanometers, about 10,000 times smaller than the thickness of a human hair. The same periodic pattern was reported last month by a research group at the University of Colorado. The TEM experiments at Kent State demonstrated that this periodicity is caused by a tilted spiral structure.

The spiral-shaped liquid crystal was predicted 40 years ago by a theoretical physicist at Brandeis University, Robert B. Meyer, who is now a professor emeritus there. For the past 20 years, researchers have observed what Lavrentovich called “strange behavior” in some liquid crystals, and in some cases, “strange responses to electric fields.” However, the structure of these “strange” liquid crystals remained a mystery.

He likened the difference between the “classic” liquid crystal structure and the new one to that between a straight rope and a twisted rope. The new type, the twist-bend nematic, is actually formed by two “classic” liquid crystal molecules that connect with a flexible chain that allows the new molecule to bend and twist in what was described as a tilted spiral.

The next challenge will be to determine why this happens and to investigate what the new structure means for the development of new materials.

In addition to the Ohio Third Frontier grant, funding for the research came from the National Science Foundation and the U.S. Department of Energy.