For Brian Lutz, Ph.D., a native of Lordstown, Ohio, what started out as a curiosity while working on his family farm has led him to where he is now.

For Brian Lutz, Ph.D., a native of Lordstown, Ohio, what started out as a curiosity while working on his family farm has led him to where he is now: asking critical research questions on fracking and shale gas issues that can affect millions of people in his home state. 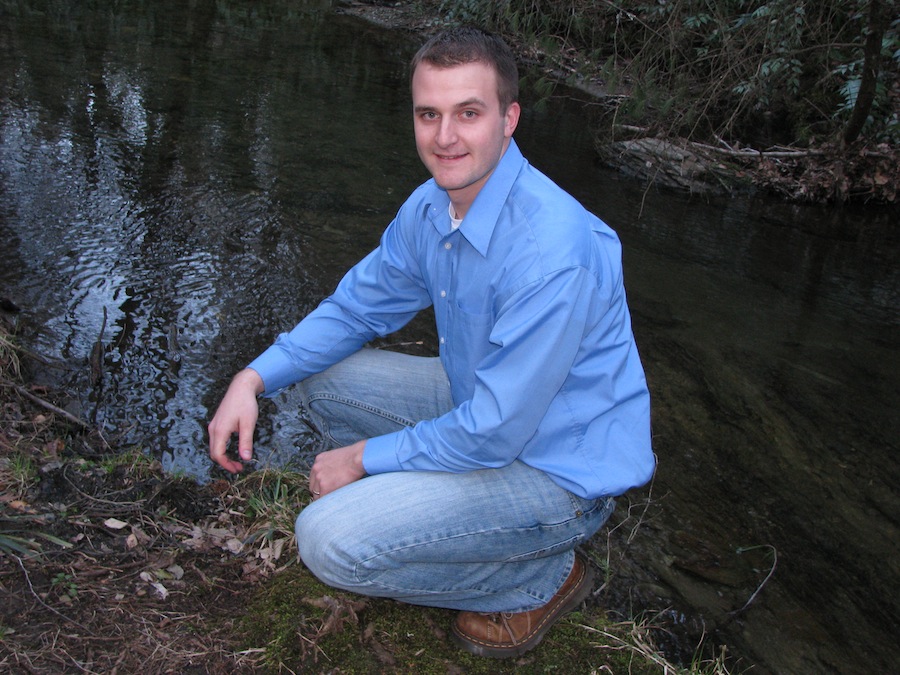 Growing up on the farm, Lutz spent summers applying nitrogen to cornfields.

“I was always stunned at how much it took and always wondered where it went and how it affected the environment,” Lutz said.

Lutz now studies how humans alter the chemistry of their environment as an assistant professor of biogeochemistry in the Department of Biological Sciences at Kent State University. Hired in November 2012, his most recent research has focused on the environmental challenges and domestic energy benefits of shale gas production compared to conventional gas production and mountaintop coal mining.

Lutz and colleagues from Duke University just released a study of hydraulically fractured natural gas wells, which are often perceived as inordinately wastewater intensive. In fact, the study published in the journal Water Resources Research shows that these wells are actually producing three times less wastewater per unit of gas recovered than conventional wells.

“That surprised us, given the popular perception that hydraulic fracturing creates disproportionate amounts of wastewater,” Lutz said. “But it’s a double-edged sword. On one hand, shale gas production generates less wastewater per unit of gas. On the other hand, because of the massive size of the Marcellus resource, the overall volume of water that now has to be transported and treated is immense.  It’s likely going to become the defining challenge for shale gas development in this part of the world.”

Lutz argues that if the challenge becomes constraining natural gas production to an acceptable volume of wastewater, the logical conclusion may be to constrain conventional production prior to shale gas production.

“That turns our perception of what regulation should potentially do on its head,” he said.

“This is the reality of increasing domestic natural gas production,” said Martin Doyle, professor of river science at Duke University’s Nicholas School of the Environment and co-author of the study. “There are significant tradeoffs and environmental impacts whether you rely on conventional gas or shale gas.”

The researchers analyzed gas production and wastewater generation for 2,189 gas wells in Pennsylvania, using publicly available data reported by industry to the state’s Department of Environmental Protection, in compliance with state law. They conducted their analysis with no external funding.

In hydraulic fracturing, large volumes of water, sand and chemicals are injected deep underground into gas wells at high pressure to crack open shale rock and extract its embedded natural gas. As the pace of shale gas production grows, so too have concerns about groundwater contamination and what to do with all the wastewater.

“Our traditional method for getting rid of this wastewater is to inject it back underground, but much of the geology throughout this region is not suitable for underground injection,” Lutz said.

Lutz and Doyle argue that we need to come up with novel technological and logistical solutions for wastewater management, including better ways to recycle and treat the waste on-site or move it to places where it can be safely disposed, both of which are happening rapidly.

“Opponents have targeted hydraulic fracturing as posing heightened risks, but many of the same environmental challenges presented by shale gas production would exist if we were expanding conventional gas production,” Lutz added. “We have to accept the reality that any effort to substantially boost domestic energy production will present environmental costs.”

Water has long been Ohio’s greatest natural resource, and many believe that the state’s economy and the health and welfare of Ohioans hinges on access to clean water. The ability to recover gas from the enormous reserves in shale formations promises to have an important impact on the economy of Ohio.

“Because hydraulic fracturing produces vast quantities of wastewater, there is an immediate need to adopt new technologies and approaches to dealing with the impact of this production on our state’s water resources,” said James Blank, Ph.D., interim dean of the College of Arts and Sciences at Kent State.

Kent State has emerged as a center of excellence in the issues related to the ecology and sustainability of our land and aquatic environments.

“Dr. Lutz has joined a large group of researchers across multiple disciplines that are focused on issues related to hydraulic fracturing,” Blank said. “Their approaches range from the biology and ecology of Ohio’s natural environments, to the biogeochemistry of aquatic environments, to the political and sociological impact on Ohio and its citizens.”

“There is still a lot of research that needs to be done to better understand the environmental impacts of shale gas development,” Lutz said. “But any method that we use for harvesting fossil energy from the earth is going to have an environmental footprint, and these new methods that are changing energy production in the U.S. are not wholly good or bad. They have advantages and disadvantages against conventional methods.”

Lutz and his colleagues are now working to develop a framework that will allow comparisons to be made between the environmental impacts of hydraulic fracturing and shale gas development to mountaintop removal coal mining.

“Having grown up here in Northeast Ohio, I recognized that this is an ideal landscape for understanding human activities and impacts on the environment,” Lutz said. “We’re situated between coal mining in the Appalachians and hydraulic fracturing in the Northeast. The role that these important resources will have in America’s energy future will depend on our ability to understand their environmental costs and to be able to weigh tradeoffs among them.”

Lutz earned a Bachelor of Science degree in biology in 2005 at the College of Wooster and completed a doctorate in biogeochemistry at Duke University in 2011. He resides in Edinburg, Ohio, with his wife, Dory, and two daughters, ages 4 and 2.