Research on common crime areas will lead to better mitigation of crimes. 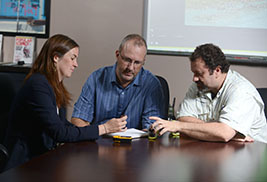 Researchers at Kent State University will investigate urban neighborhood crime hotspots in Northeast Ohio over the next two-and-a-half years, funded by a $474,000 Department of Justice grant.

Their focus will be what makes a particular place a likely crime hotspot, based on interviews with law enforcement officers, neighborhood residents, community leaders and, in a novel approach, even ex-offenders who are familiar with the neighborhood.

The study will combine the interviews with Geographic Information Systems (GIS) mapping and videos. Some of those interviewed will ride along with the researchers on Google car-style video mapping tours of neighborhoods, adding their street-wise views to the mapping data.

The researchers expect to be able to analyze an area’s crime potential at the micro-level, finding answers to why a particular block, corner or alleyway is likely to be a crime hotspot.

“People want to know what causes a criminal environment and nobody asks the community members who know their neighborhoods best,” says Eric Jefferis, Ph.D., associate professor of social and behavioral sciences in Kent State’s College of Public Health and the lead investigator.

Jefferis also is the research partner of the Northern Ohio Violent Crime Consortium, which covers the eight largest cities in northern Ohio.

By seeking multiple viewpoints, the researchers will tap into institutional knowledge and community perspectives for a “richer understanding of the neighborhood,” says Andrew Curtis, Ph.D., associate professor of geography at Kent State who will lead the GIS mapping and video portions of the project.

The researchers hope to build on the commonly accepted “broken windows” theory that neighborhood neglect makes an area vulnerable to criminal activity.

“What’s considered urban blight by one person might not seem like it to another,” says Lauren Porter, Ph.D., an assistant professor of sociology at Kent State and the third researcher on the project. It’s unclear which comes first – disorder in a neighborhood or crime, she noted.

The researchers began their video mapping tours in January. Neighborhoods will be visited multiple times over the two-and-a-half years of the grant, and layers of data will be collected. The research will yield predictive models that could help police assess where the next crime hotspot is likely to be, and where new resources could make the biggest impact.