As David Barnes’ senior year was drawing to a close, the 2009 graduate of Champion High School was intensely focused on his next educational move.

With full-ride scholarship offers on the table from Cleveland State University and the University of South Florida, it seemed that a move out of the area would be a foregone conclusion. Ever the pragmatist, Barnes approached the decision in much the same fashion as his future career would dictate - matter-of-factly.

“South Florida was tempting for the weather alone,” said Barnes, B.A. ’12. “But I chose Kent State Trumbull because even when you look at those other 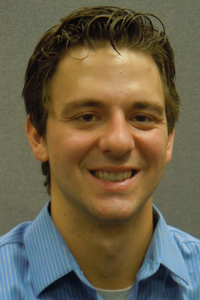 The move - or lack thereof - worked perfectly for Barnes, who now finds himself enrolled at Stanford Law School in Palo Alto, CA. U.S. News and World Report recently ranked Stanford as the third-best law school in the nation, behind only Harvard and Yale universities.

Accepted at seven of the nine law schools to which he applied, Barnes originally committed to Harvard before accepting an offer from Stanford, which had wait-listed him earlier in the application process. It’s a move that Barnes feels sets him up well for his future.

“My desire is to work in California after law school,” Barnes said, “So it makes sense to be there in the first place. I love the Bay area, and with legal hiring, oftentimes employers view you as a flight risk if you have not lived in the area previously. They don’t want to sink tons of money into training you, only to see you take off soon afterward.”

With both Harvard and Stanford holding such lofty places among the nation’s top law schools, it was not a matter of choosing one based on reputation or graduation rate for Barnes. Rather, it came down to something more practical.

“In a way, it (Stanford) is like Kent Trumbull,” Barnes said. “The class sizes are much smaller (than Harvard), and provide for a much more personal education, and relationship with the instructor. That’s a huge perk.

“Harvard’s incoming class is 570 students, while my class at Stanford is only 180. That equates to 30 students per lecture, in comparison to over 100 (at Harvard). Stanford seems more collaborative, and they have the best job prospects in the country. It’s really where I wanted to go.”

After graduating at the top of his class from Champion High, Barnes earned his bachelor’s degree in justice studies from Kent State Trumbull in only three years, which included a 42-credit hour freshman year.

“I was really determined,” Barnes said. “I had to make some sacrifices, like hanging out with friends on the weekends, and the like, but I had seen people I knew go the ‘traditional’ route, and end up spending another semester, or another year, earning their undergrad degree. That’s more time, and more money, I wasn’t ready to spend.

“Today’s average law school graduate leaves with a diploma, and about $120,000 in debt. That almost sentences you to taking a high-paying corporate law position right off the bat, in order to get that debt off your shoulders.”

While the corporate route may appeal to a large sector of law students, personal connections to both criminal and environmental law provide a calling for Barnes.

Originally enrolled at Lakeview High School, Barnes was assaulted by another student there, prompting his transfer to Champion High where he would eventually take part in a mock trial as part of a justice studies course. Playing the role of prosecutor, Barnes not only won the case, but the attention of his instructor who told the then-sophomore he should seriously consider a law career.

“My teacher felt I really excelled at the (mock) trial, and said he saw in me, my desire to help people who had been wronged,” Barnes said. “That really stuck with me, and the more and more I thought about it, the more and more it made sense. From the middle of my sophomore year, I knew the law was what I wanted to focus on.”

The environmental flip side came following a trip to Yosemite National Park and Sequoia National Forest in California.

“Seeing those parks, and taking in all they had to offer, really, was an out of body experience,” Barnes said. “Standing at the base of a cliff, watching a waterfall… it’s unreal.”

The National Park Service, which has long struggled with underfunding, has been crippled by compounded budget cuts over recent years. The budget to operate national parks has been cut nearly eight percent, or nearly $190 million, compared to just four years ago, forcing delayed park openings, and a decrease in the number of rangers to protect and maintain those parks, among other cuts.

Barnes believes these national treasures are worth fighting for.

“The more I’ve studied about the park service, and what those lands mean to the public, and to our history,” said Barnes, “the more I understand and recognize the need for their preservation. They are something that is so much bigger than any of us. It’s not about protecting (the parks) for one, but protecting them for all.”