Refusing to be defined

MS Not Slowing Down Sandrella

Nicole Sandrella has heard it all when it comes to people’s responses when they learn that the Kent State University at Trumbull senior has multiple sclerosis.

Multiple sclerosis (MS) is an unpredictable, often disabling disease of the central nervous system that disrupts the flow of information within the brain, and between the brain and body. The cause of MS is still unknown – scientists believe the disease is triggered by as-yet-unidentified environmental factor(s) in a person who is genetically predisposed to respond.

According to the National MS Society, the disease – which is not contagious or directly inherited – is thought to affect more than 2.3 million people worldwide.

“People seem to think if you have a disease, you’re supposed to look a certain way,” said Sandrella. “My question is, ‘What does multiple sclerosis (MS) look like?’” For me, MS looks like what I see when I look in the mirror.”

That reflection is one of a strong, vibrant, and determined young woman. One that has risen above the tests that her body has challenged her with, as evidenced by four appearances on the Kent State Dean’s List and her arrival on the President’s List last fall. 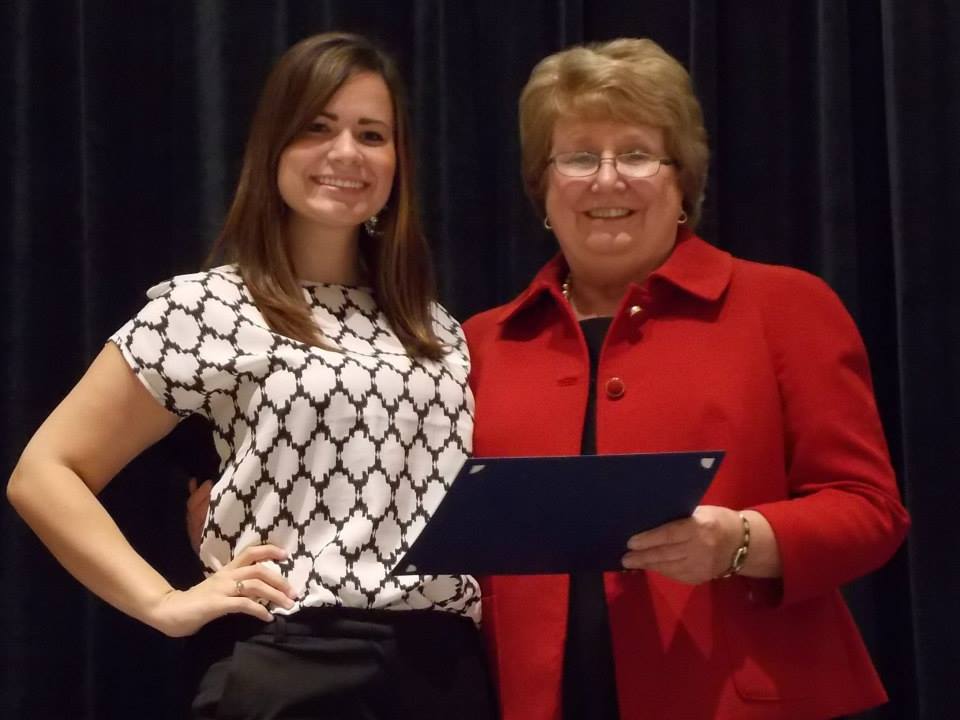 “I don’t want this to be my entire life,” Sandrella added. “And at this point, with my medication, I’d say I’m pretty normal.”

However, the morning of October 29, 2013 was anything but normal for Sandrella.

When the 2011 Champion High School graduate awoke, she noticed numbness in her right hand, which she attributed to probably sleeping on it the wrong way. Nevertheless, as the day continued, so did the odd sensation.

Sandrella knew something was amiss.

“My mom is a nurse, so I gave her a call at work to let her know what was going on,” said Sandrella. “She was able to get an appointment for me the following day with our family doctor.” However, just an hour after confirming her appointment for the next day, the numbness began to spread up Sandrella’s arm and into her shoulder.

“At that point, I was starting to freak out just a little because I couldn’t feel anything in the entire arm,” said Sandrella. A visit to the emergency room resulted in a pinched nerve diagnosis, but a short time after leaving the hospital, the numbness enveloped the entire right side of Sandrella’s body.

The following day’s visit with the family physician led to an MRI which showed a lesion at the fourth cervical vertebra (C4) of Sandrella’s spinal column, suggesting either a tumor or MS.

A second MRI, this time of Sandrella’s brain, was conducted in the following days as the numbness now took over her entire body.

“At this point, we visited the first of two neurologists,” said Sandrella, “and I was diagnosed me with transverse myelitis and put on steroids to help with the numbness."

However, when that treatment failed to produce positive results, Sandrella sought a second opinion at the Cleveland Clinic. Additional MRIs (showing a lesion in the brain stem), and a spinal tap produced a 96 percent positive return for MS plaque.

“In hindsight, I think I was more upset when I didn’t know what was going on,” said Sandrella of finally having a definitive diagnosis. “After the specialist told me it was MS and walked out of the room, I cried for about five minutes, but when she returned, I stopped and knew it was time to deal with it. Everyone has something they go through in life, this happens to be mine. I don’t feel sorry for myself, and no one else should either.”

While the blow of such a diagnosis would hit hard, the silver lining for Sandrella is that she is suffering from relapsing-remitting multiple sclerosis (RRMS), which is characterized by clearly defined attacks of worsening neurologic function. These attacks — often called relapses, flare-ups or exacerbations – are followed by partial or complete recovery or remission periods, during which symptoms improve partially or completely, with no apparent progression of the disease.

According to the National MS Society, approximately 85 percent of people are initially diagnosed with RRMS, compared to 10-15 percent with progressive forms of the disease.

With diminished mobility, Sandrella found out quickly that everyday tasks were becoming challenges. From putting on her pants to washing her hair, she was faced with doing something she doesn’t often do or enjoy – seek assistance from others.

“It was a bit of a challenge in the classroom early on,” said Sandrella. “I needed a notetaker for two semesters (fall 2013 and spring 2014), and had to take my tests in the Learning Center because I needed additional time.

“I was so grateful for the help the university provided, but being as independent as I am, it drove me crazy. I don’t like relying on others to do my work. But then again at home, I was having my mom and sister dress me and wash my hair because I couldn’t feel if my hand was on top of my head or not, so by comparison, things weren’t so bad at school.”

Currently, Sandrella is experiencing a bit of a health renaissance as her latest MRI was negative for spinal lesions. “My doctor was amazed that my body had healed itself like that,” Sandrella said. “It doesn’t mean I’m MS free, it just means I’m in a remission phase at the moment. My left hand is still numb, and probably always will be, but I can live with it.

"Another relapse is inevitable, and chances are it won’t be numbness the next time around,” Sandrella continued. “It could be double vision, loss of balance, any number of alternatives. But at the end of the day, I know I can do anything, and will push through. Having this disease will not define me.”

From one side of the advisor desk to the other, Chris Cooney will be missed
A Message From the Dean
Kent State Trumbull Welcomes New Assistant Dean
Mailing Address
4314 Mahoning Avenue NW
Warren, OH 44483